So many stories. So little time? That’s okay – just watch the vid and follow the links. This Week! In Star Wars brings us all the news from a galaxy far, far away. Then we aggregate it!

First up, check out StarWars.com’s Kristin Baver’s work as she outlines the week that was in Star Wars:

The Bad Batch Returns, Your Photos of The Child, and More!

This week in Star Wars, we are reunited with Clone Force 99 in the upcoming Disney+ show Star Wars: The Bad Batch, check out some new concept art from ILMxLAB’s Star Wars: Tales from Galaxy’s Edge, and our hearts grow three sizes looking at your photos of The Child. Plus, we celebrate the birthday of the original scruffy-looking nerfherder, Harrison Ford.

Now, for some deets. The series follows the elite and experimental clones of the Bad Batch (first introduced in The Clone Wars) as they find their way in a rapidly changing galaxy in the immediate aftermath of the Clone War. Members of Bad Batch — a unique squad of clones who vary genetically from their brothers in the Clone Army — each possess a singular exceptional skill, which makes them extraordinarily effective soldiers and a formidable crew. In the post-Clone War era, they will take on daring mercenary missions as they struggle to stay afloat and find new purpose.

We wrote about the new series below:

The cancelation of Comic-Con brings some special opportunities for collectors:

To celebrate this powerful cinematic moment and the 40th anniversary of Star Wars: The Empire Strikes Back, Mattel has unveiled a San Diego Comic-Con exclusive Hot Wheels X-Wing, complete with all that greenery that was still stuck to the ship when Yoda was done. Reminiscent of the unforgettable scene, the package offers a unique feature so you can raise the X-wing out of the swamp for yourself, as it slowly rotates as if the Force were guiding it. 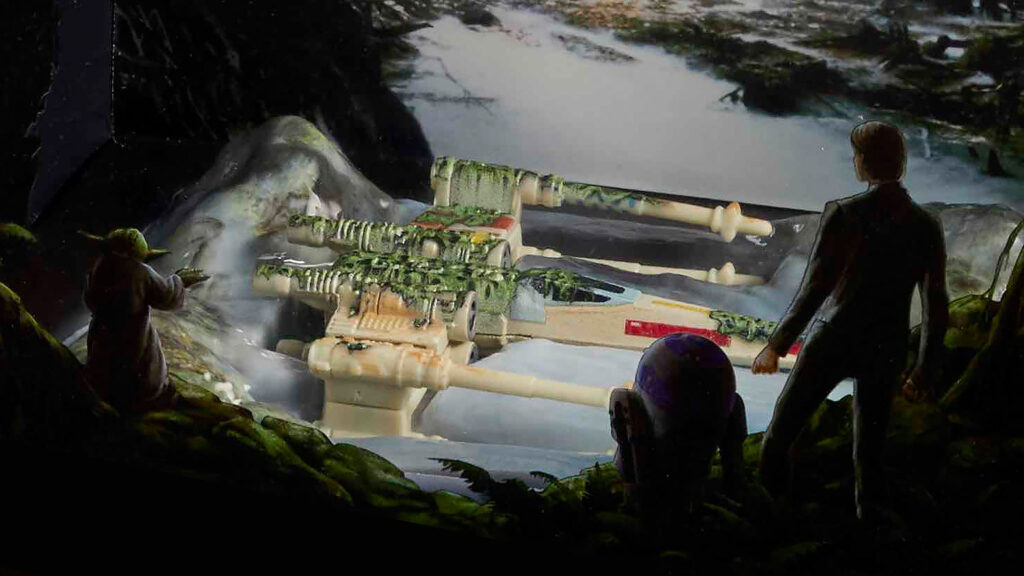 Lucasfilm continues to explore the stories of Batuu and new concept art (see below) is beginning to fill out the landscape.

“We are so excited for fans to step into Star Wars: Tales from the Galaxy’s Edge later this year,” said Vicki Dobbs Beck, ILMxLAB Executive-in-Charge. “This action-packed adventure not only speaks to the promise of connected and complementary experiences by extending the lore around Black Spire Outpost, it represents another meaningful step in ILMxLAB’s quest to transition  from storytelling – one-way communication – to storyLIVING, where you’re inside a world making consequential choices that drive your experience forward.”

Discover something new on Batuu in #StarWarsTales from the Galaxy's Edge. Concept artwork by Russell Story.

For more on the ILMxLAB project, read our post below:

We posted about Grant earlier this week:

Also, thanks for visiting MickeyBlog.com! Want to go for your own Magic Kingdom walk? For a FREE quote on your next Disney vacation, please fill out the form below and one of the agents from MickeyTravels, a Platinum level Authorized Disney Vacation Planner, will be in touch soon!