Disney+ Is Winning When It Comes To Customer Satisfaction

We’ve gotta say that we’ve become so dependent on Disney+ that it’s hard to believe that Disney’s streaming network has only been around since November. With shows like The Mandalorian combined with one of the best back catalogues in the biz, it has been one of our go-to, stay at home essentials!

And according to a recent survey by the American Customer Satisfaction Index, it looks like we’re not alone! As a recent press release by the ACSI reveals, “With stay-at-home and work-from-home becoming a new normal for many American households, the services offered by major telecommunications companies are more crucial than ever before. ” David VanAmburg, Managing Director at the ACSI adds, “Fortunately, many telecom companies laid the groundwork before the pandemic, offering their customers better services compared to last year.”

Chief among those- Disney+

According to the survey, Disney+ comes out tops in the “streaming wars” following a strong debut. According the ACSI’s ranking system, Disney scored the top spot in video streaming across five categories earning a score of 80.

How does that stack up with the competition? Netflix was in second place with a score of 78 and Hulu (now also controlled by Disney) came in at 77%.  Lagging just 1% behind is Amazon Prime Video with a score of 76.

You can see how Disney+ stacked up against the competition with this infographic: \ 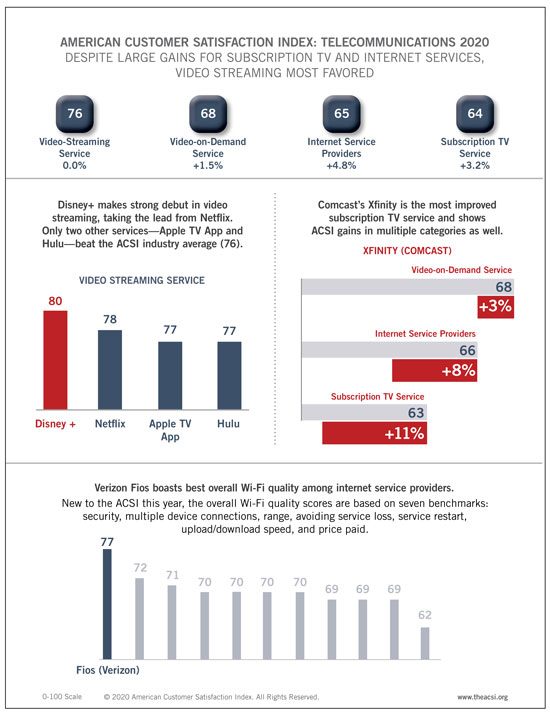 This is fantastic news for Disney+, and the streaming juggernaut shows no signs of slowing down. With a ton of projects in the works including the second season of The Mandalorian, Artemis Fowl and Hamilton coming out this Summer and a slew of Marvel series on the horizon (WandaVision, Loki, Hawkeye and Falcon and the Winter Soldier) the momentum shows no signs of slowing.

This is a story that we’ll be keeping special tabs on so keep checking in with MickeyBlog for the latest news and updates.