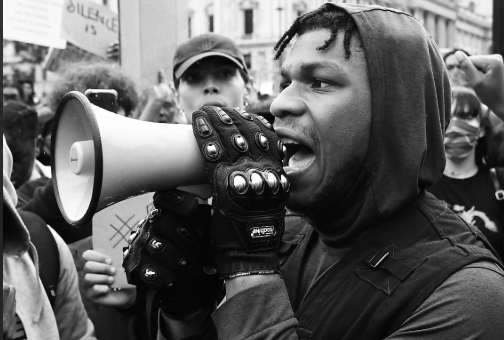 The Star Wars franchise may no longer have a part in the Star Wars galaxy after the conclusion of the Skywalker trilogy but Disney reminded him that he is still very much a part of the family.

Boyega gave a powerful and emotional speech on the death of George Floyd during a Black Lives Matter march in London yesterday and Disney and Lucasfilm took to social media to show their support.

In the tweet (which you can see just below) Lucasfilm took the time to call Boyega a hero and took to social media to let him know that the company stands with him.

This speech is the culmination of several days of Boyega taking a stand against social injustice on social media after the May 25th killing of Floyd by four Minneapolis police officers who are now facing criminal charges.

George Floyd. So heartbreaking to hear about the continuous cycle of violence aimed at black people by racist cops. Murder charges only. #justiceforgeorgefloyd First post where I’ve had to turn off comments. Ain’t none of you getting the last word today. That’s that.

You can check out the Boyega’s power speech in its entirety here:

Boyega, as you know, played the role of Finn in all three recent Star Wars films including The Force Awakens, The Last Jedi and The Rise of Skywalker.

Filmmaker JJ Abrams took to social media to share these words of support for Boyega:

You KNOW that as long as I’m allowed to keep working, I’ll always be begging to work with you. Deep respect and love, my friend. https://t.co/DcMEwEmzh9

Mark Hammill also took to Twitter to show his support:

Lin-Manuel Miranda also expressed his desire to work with the actor in the future:

Oh god I WISH, Ojalá! From Attack The Block to this day! pic.twitter.com/sB7eJqF0sy

We will continue to follow this story closely. Keep checking back with us for the latest news and updates.