If you were a Disney World regular back in the 2000’s then you may remember Pirate Bob. Bob Carlos worked at Disney World for over 20 years where he was a familar face in Adventureland. Sadly, we are just getting the news today via a piece appearing in the Orlando Sentinel that Bob and his wife Banos have both passed away from complications of COVID-19.

According to the report, Bano Carlos, Age 73, passed away on March 30th and 75-year-old husband Bob, fought on a ventilator until he passed on April 24th. 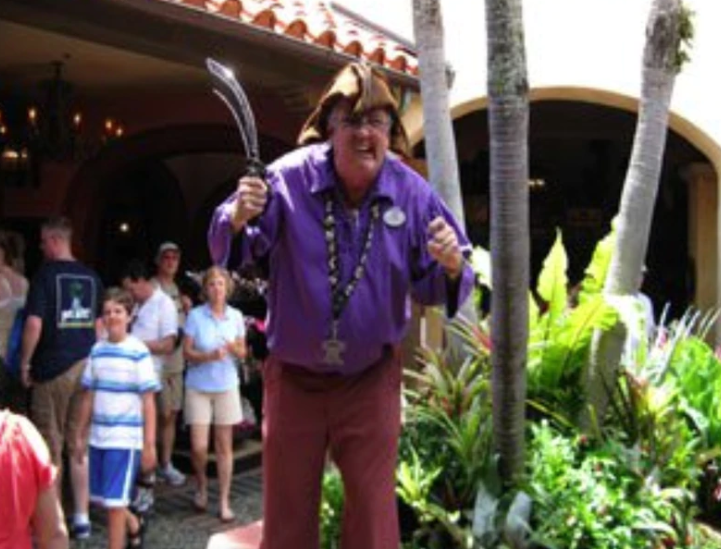 According to his son Rob Carlos, Bob was a man that loved America, serving in the U.S. Navy. He dreamed of working at Walt Disney World since he saw his first animatronic in 1976 and would go on to have a 20-year career at the resort along with his wife Banos.

While Banos worked in reservations, Bob Carlos took on a larger-than-life role at the Magic Kingdom where he was known by many a guest as “Pirate Bob.”  He could often be seen at the Pirates of the Caribbean gift shop where he was renowned for his colorful interactions with guests.

The piece in the Sentinel recalls that in-between ringing up guests, Pirate Bob could be seen signing autographs books and telling a joke or two!  Many of the guests would remember him and would make a point to visit him as they came to the parks each year.

Bob Carlos retired from Adventureland in 2011 after 20 years with the Walt Disney Company! After his daughter Tracey Carlos posted of her father’s passing on Facebook, one former visitor commented, “We would always go to see if Pirate Bob was there.”

Our condolences go out to Bob and Banos’ family, friends and fellow cast members.