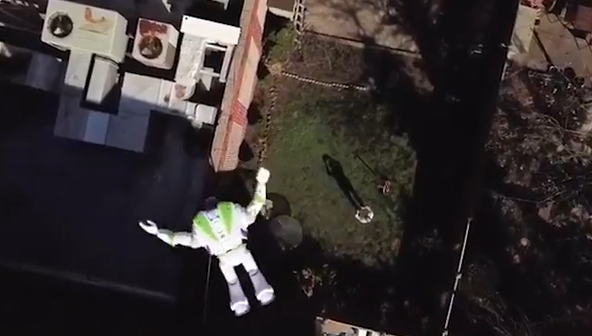 A Brooklyn dad is fighting back against the quarantine boredom, and he’s using his son’s Buzz Lightyear toy.

John Cirillo and his two-and-a-half-year-old son Cassius got the idea to attach his toy Buzz Lightyear to a drone and send him flying through Brooklyn- and beyond!

Cirillo says his son “loves making anything fly. When we showed him ‘Toy Story,’ he became obsessed with Buzz [Lightyear], so we ordered him a figure,” Cirillo tells Storyful.

“He runs around the house pretending to fly him all day long,” the dad adds. “Once I had the thought, it was a no-brainer.”

Many people have been coming up with fun ideas to beat the quarantine boredom. Actor and big Disney fan, Drake Bell, made his own version of the Haunted Mansion on TikTok. Yes, that’s the same Drake from Nickelodeon’s Drake and Josh. Take a look.

Drake is a California native and frequents Disneyland. In his video, he shows off some of his favorite Haunted Mansion memorabilia including a Hatbox ghost, full-length prints of the infamous stretching room portraits, and the weathered plaque that hangs at the attraction’s entrance. Pretty impressive!

What have you done at home to fight the quarantine boredom? Share in the comments below!