If you’ve been following along with MickeyBlog then you know that Disney made the announcement on Friday that both Walt Disney World and Disneyland Resorts would remain closed indefinitely. Despite the announcement, many avid park goers were optimistic that things would re-open at some point next month. However, now that looks increasingly unlikely.

According to various news reports coming in this evening (Sunday, March 29th) President Donald Trump has just extended the national social distancing guidelines to April 30th after suggesting that the death rate from COVID-19 is expected to peak in two weeks.

“Nothing would be worse than declaring victory before the victory has been won,” Trump said at an evening press briefing. “Therefore we will be extending our guidelines to April 30.”

Earlier in the day, White House health adviser Dr. Anthony Fauci said the country could see up to 200,000 deaths and millions of infections, though he cautioned that nothing is certain. 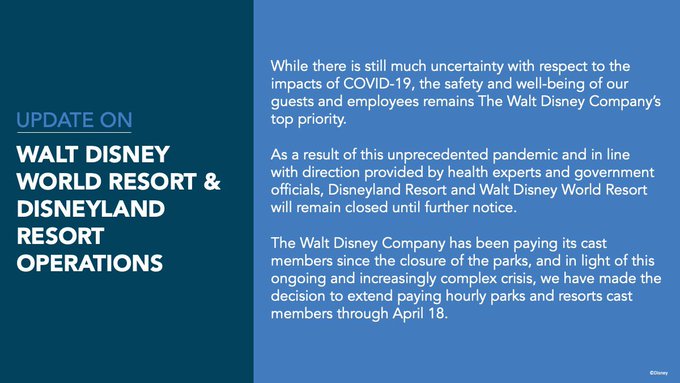 At the moment, Disney has suspended theme park bookings through June 1st in an abundance of caution.  This is a story that we’ll be following very closely here at MickeyBlog so continue to follow along for the latest news and updates.