Let’s All Go to Magic Kingdom in Walt Disney World!

Okay, Disney theme parks are still closed, and we’re still missing them dearly. So, let’s take this opportunity to enjoy a bit of escapism. Let’s head to the perfect Disney theme park in our mind, where admission is free, Dole Whips and turkey legs magically appear, and Minnie Mouse hangs out with us all day. Today, we’re visiting Magic Kingdom in Walt Disney World!

Somehow, we’re walking through the most trafficked theme park on the planet, yet the crowds are non-existent! We can take our time and do whatever we want to do. 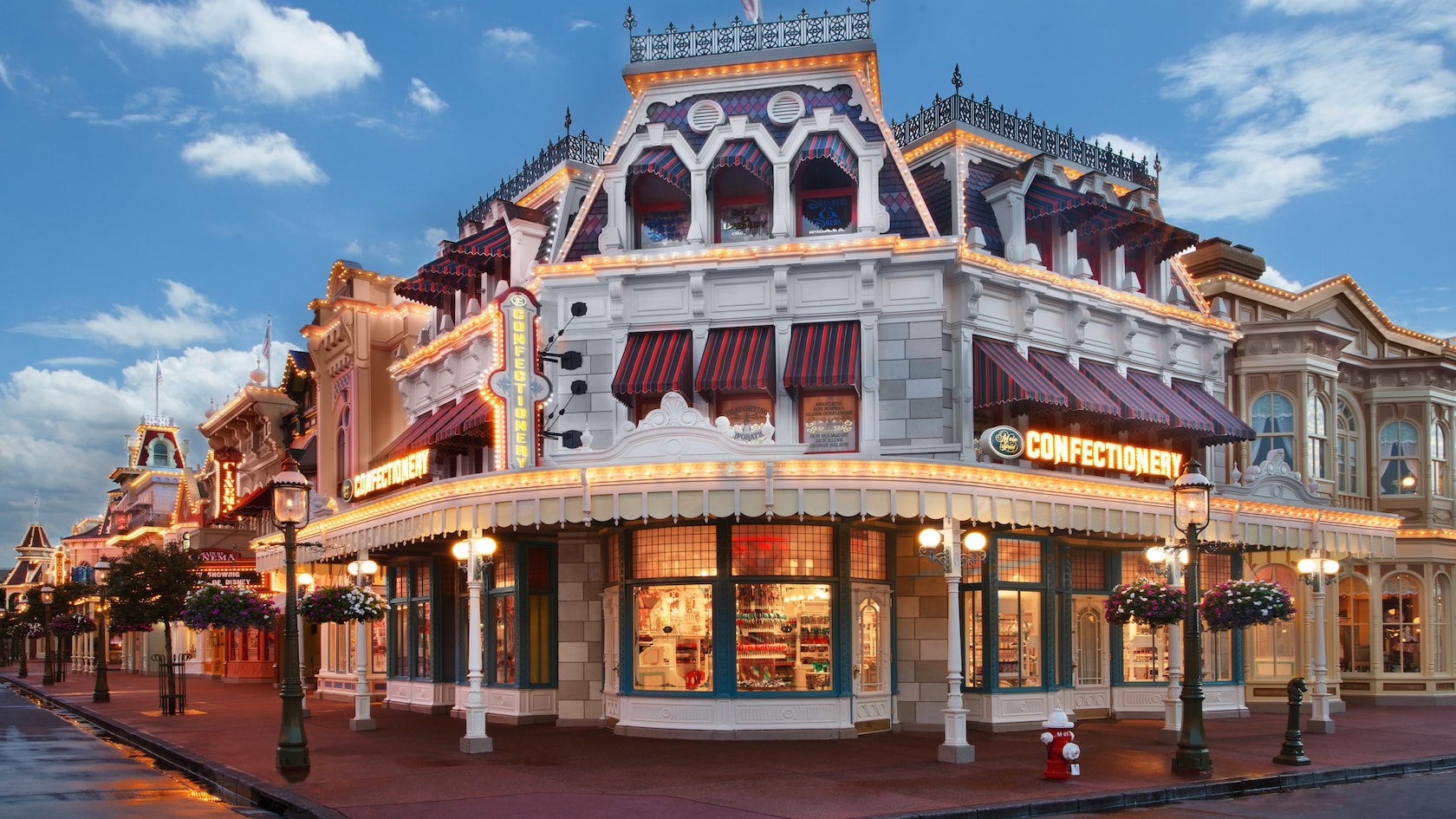 So, I say that we stop by Main Street Confectionary and grab some sort of morning pastry. Remember: calories don’t count when the food isn’t real!

Now then, we could take a lot of approaches to our visit. However, I’m a creature of habit. At Rope Drop, I always head to Seven Dwarfs Mine Train. So, let’s take a spin on the tilting ride carts and sing our favorite Seven Dwarfs song!

You know what? That was lovely…but I’d like to ride it at night, too. Let’s fast forward our watches until after dark.

From there, we might as well visit Hundred Acre Wood since we’re right there.

Wait a minute. When did The Many Adventures of Winnie the Pooh move in? I thought Mr. Toad lived there. Wait, he did! Remember?

While we’re in this area, we should ride Mad Tea Party. I promise that you won’t get sick this time!

Before we visit Tomorrowland, I’m not quite done in New Fantasyland, though. I want to do it ALL today!

Let’s ride Peter Pan’s Flight…but we should walk through the line this time to appreciate the Imagineering brilliance here.

Then, let’s stop at Mickey’s PhilharMagic and watch Donald Duck get stuck in the wall again.

I’m going to skip Princess Fairytale Hall for now, as we’ll catch up with Disney Princesses at lunch. Instead, let’s head over to Under the Sea: Journey of the Little Mermaid to watch Ursula get her long-overdue comeuppance.

Under the Sea – Journey of the Little Mermaid

True love has won yet again! I could still go for one retelling of an animated classic, though.

Did you get picked to participate in the show?

Whew. It feels like we’ve done a lot…and we haven’t even left New Fantasyland yet! Who’s up for a bite to eat? We shouldn’t settle today.

Let’s eat in the heart of Cinderella Castle! Time to head over to Cinderella’s Royal Table for some refined cuisine and a lot of Disney Princesses!

Spending the Afternoon in the World of Tomorrow

We’re heading over to Tomorrowland, and we might as well do it the fun way. Let’s take the Skyway!

While we’re there, we can drive:

Better yet, we can ride on the best transportation system that never became a thing!

We can even travel to outer space and back!

Have you ever wondered what Space Mountain looks like with the lights on? We can ask the cast members to show us that, too!

Space Mountain with the Lights On

Afterward, you can wipe the floor with me on Buzz Lightyear’s Space Ranger Spin. I’m terrible at it.

And before we leave Tomorrowland, we should re-live one of its most memorable experiences. Can you survive the ExtraTERRORestrial Alien Encounter?

After that, I totally understand if you need a quick laugh after that. So, here’s Monsters, Inc. Laugh Floor.

We’ve already accomplished more than anyone could possibly expect during a Magic Kingdom visit. We’re nowhere near finished, though! We’re going to crisscross the park to Adventureland and ride some of the classic Disney attractions we haven’t experienced yet!

We will start with Jungle Cruise, which I promise will NOT sink!

Then, we will sit a spell and enjoy the world’s first Audio-Animatronics on a theme park attraction. They’re at Walt Disney’s Enchanted Tiki Room!

Well, technically, those are at Disneyland, but you get the point. However, I just remembered that we forgot something! Let’s teleport back to Tomorrowland to check out Walt Disney’s Carousel of Progress, too!

Those attractions really do go hand in hand. I wish they weren’t on opposite ends of the park. Since they are, we’ll have to teleport back to Adventureland to hang out with Captain Jack Sparrow.

Here’s Pirates of the Caribbean!

If you’re a purist, you can watch the old version as well.

Afterward, I say that we mosey over to Frontierland, as walking just won’t do during the Old West era.

We will cover the Big Two, starting with Splash Mountain.

Then, you know what comes next! Yes, it’s Big Thunder Mountain Railroad. Who knows? Maybe you’ll pass a kidney stone!

Before we leave, we should take in another show.

I love the bawdy, downhome humor of Country Bears Jamboree.

Okay, we’ve done a lot today, but we still have a couple of attractions to experience. Before we do, let’s make a quick food run. You get the Dole Whip, and I’ll grab a turkey leg.

You know what. That’s not good enough. We should treat ourselves. How about Be Our Guest?

While we’re waiting for our food settle, let’s watch one last extremely patriotic show. Who’s up for Hall of Presidents?

While Magic Kingdom still has several rides left, let’s hone in on the classic that we haven’t done yet. Everyone hop on a Doom Buggy! It’s time for Haunted Mansion!

Now, let’s all grab a great spot for the fireworks and parades!

We will start in the afternoon with Festival of Fantasy:

Then, we’ll switch to fireworks. Don’t you love Happily Ever After?

Still, I will always have a soft spot for a different show. Let’s close our magical day with a trip down memory lane. Who’s up for Wishes?

Remember, everyone! Disney’s never closed in your heart. Simply fantasize about being at Magic Kingdom, and your wish will come truuuuuuuuuuuuuuuue!