Did you ever want to build a lifesize Star Wars droid?

Soon, thanks to LEGO, you and I will be able to go Ugnaught!

There’s no official mention of D-O on the LEGO website, as of yet.

Then, there are some new Mandalorian LEGO sets.

Fly to the outer reaches of the galaxy in The Mandalorian’s unique armored transport shuttle, the Razor Crest! Protect the Child by defeating the Imperial soldiers and explore the cargo hold for carbonite bounty, spring-loaded shooters, an escape pod, and other amenities. Available at LEGO.com and Amazon.com.

Or LEGO’s BrickHeadz line is introducing the dynamic duo of the Mandalorian and the Child. Create a hover-pram for the Child and adjust its ears for its emotions.

Your new favorites from the galaxy are finally here. #LEGOStarWars #Mandalorian #StarWars pic.twitter.com/hnKw5jGNUw

The Mandalorian & the Child will arrive in August and looks to be $19.99.

Inspire memories of epic Star Wars: The Mandalorian stories with this fun building toy for creative kids, featuring LEGO® BrickHeadz™ versions of The Mandalorian and the Child (75317). Fans will appreciate authentic details such as The Mandalorian’s signature weapons – a blaster rifle and a blaster pistol. The Child has adjustable ears to create happy and sad expressions, and it sits in a hoverpram ‘floating’ on 4 transparent LEGO elements.

And, perhaps the crown jewel of the Star Wars collection this year, check out The Razor Crest: 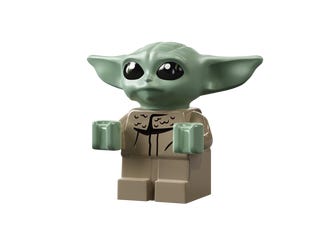 A challenging build for ages 10 and up, this 1,023-piece starship construction kit includes 5 collectible LEGO Star Wars characters, including new-for-August-2020 The Mandalorian and the Child LEGO minifigures. It’s great for role play and combines with other LEGO Star Wars sets for even more action…

This fun buildable toy includes 4 LEGO® minifigures: The Mandalorian, Greef Karga, Scout Trooper, and the Child, plus an IG-11 LEGO® figure, all with cool weapons to role-play exciting battles.

Oh! You Want Something Today?

But maybe you are excited to build something today!

We’re hearing this pack is already available (in LEGO stores, Walmart; however, I didn’t see it at Target).

Okay, so I am on my way to Walmart to pick up the Mando pack. Talk to you, soon….