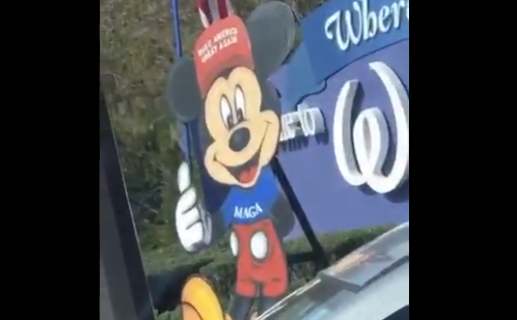 Some reports are coming in via Twitter that several of the Walt Disney World signs in Orlando, Florida are being altered or improperly used for political campaign advertising.

Here at MickeyBlog we aren’t sure how long these videos will remain up on Twitter but for now, you can take a look here:

As you can see from the video above, people can be seen adding 2020 re-election signage to the Walt Disney World display including a MAGA hat and t-shirt affixed to a Mickey Mouse.

Here’s another image of the signage from a slightly different entry point. If you click to expand the image you can see that the props have been moved to a different location near the McDonalds on Walt Disney World property.

It would seem that these locations were targeted due to the fact that it is Presidents Day. That being said, Disney World is very busy this weekend with holiday crowds so we can’t imagine that it will take Disney too long remove the signage or to prevent it from migrating around the vicinity.

Also, politics aside, it’s worth pointing out that altering or defacing Disney signage in any way is illegal.  Developments are coming in thick and fast on this one so we promise to keep you posted!