The Best Simpsons Episodes to Watch on Disney+ 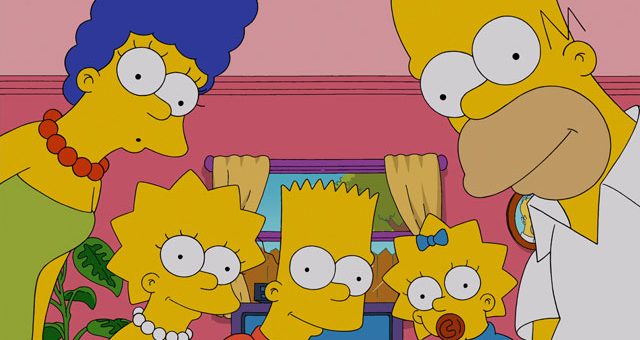 Since the inception of Disney+, The Simpsons has held the title of most popular television series. In the Now Trending section, it’s generally the top series and sometimes the number one overall form of content on the platform.

Sadly, many casual Simpsons fans are playing catchup, though. They stopped watching around season 10 and never looked back. Because of this choice, they’ve missed more than 400 episodes! If you fall into this category, you need to know which ones are worth your time. Here are the best 12 Simpsons episodes of Seasons 11-20.

Lisa Simpson’s hobbies frequently make for the best episodes. It’s always lovely to watch her be passionate about something, and this show hits a grand slam with its premise.

Lisa watches a romantic comedy about dancers and decides to train. Unfortunately, she encounters a Shirley Temple type named Little Vicki, who persuades Lisa to try tap dance instead. 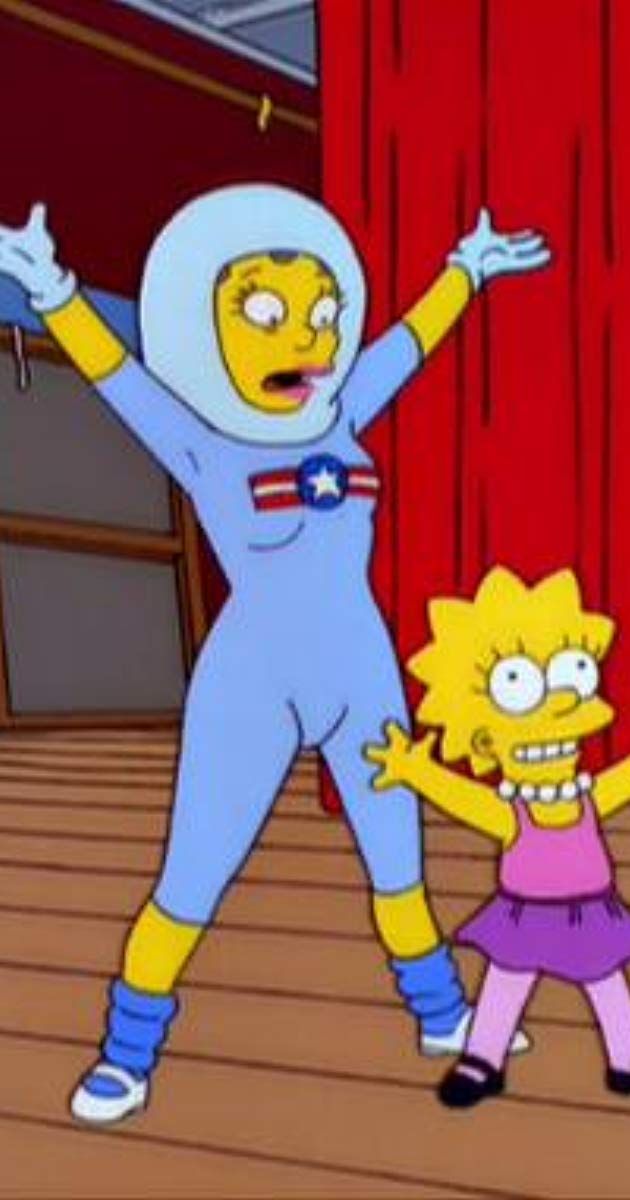 Best line: “You’ve just got to turn that frown upside-down! (Lisa smiles) That’s a smile, not an upside-down frown! Work on that, too!”

For a time, VH-1’s Behind the Music dominated cable television. Pop culture voyeurs adored its examinations of the real-life struggles of musical acts from the 1980s and 1990s. 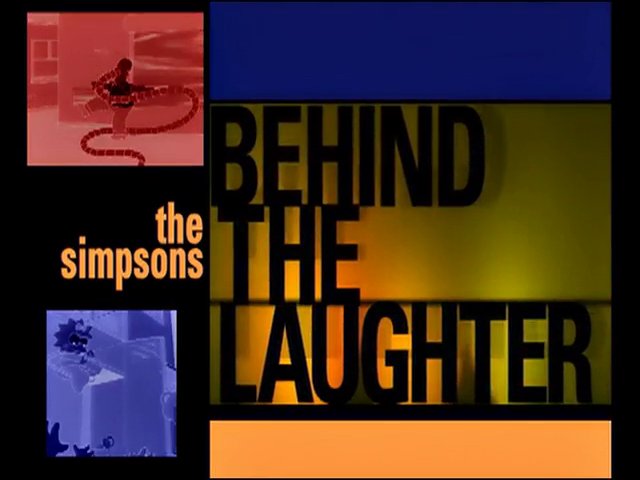 The Simpsons parodied the premise by telling a story about the family’s heyday as a television show and touring entertainment act. Behind the Music’s narrator, Jim Forbes, brings his gravely serious tone to the ridiculousness. Behind the Laughter stands as one of the show’s best send-ups ever, especially for fans of Behind the Music.

Out of all residents of Springfield, Krusty the Clown, the beloved children’s entertainer, somehow seems like the worst parental material. Insane Clown Poppy mines this premise for all its worth as a young girl named Sophie goes in search of her father.

When Krusty learns that he’s a daddy, he really, really tries to do right by the girl. But he’s Krusty the Clown. So, it doesn’t go well, especially when Fat Tony and the mafia get involved. 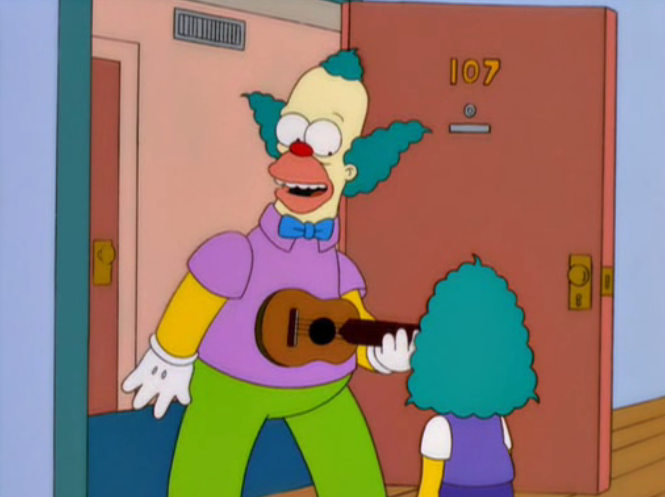 Best line: “All mom ever said was my father was some pathetic clown. So, I typed ‘pathetic clown’ into a search engine, and your name popped right up!”

One of my favorite jokes from Rock of Ages: The Musical is that the only fate worse than becoming a stripper is performing in a boy band. During the 1990s, these monstrosities roamed the Earth like the walking dead, infecting radio with their sexless, soulless sound. 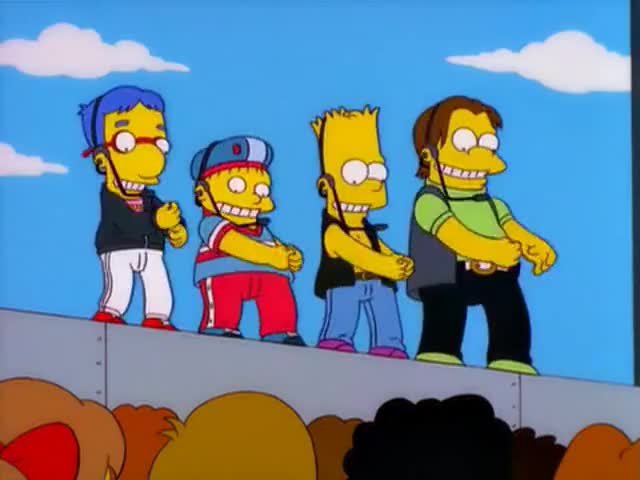 New Kids on the Blecch ridicules the idea as Nelson, Milhouse, Bart, and Ralph Wiggum form the Party Posse, the “greatest band since music’s birth.” Amazingly, the entire thing is a Navy plot! And the boys perform a series of songs that are actually voiced by N’Sync.

Homer’s worked many jobs over the past 31 seasons. This episode leans into the absurdity of it as one of Springfield’s frequent law-breakers suddenly becomes the law. Homer starts a security company that proves more effective than the police department.

The oddity of this episode is that Homer’s good at the job! For once, he never screws up, and as he later laments, he may get killed by Fat Tony because of it. In the end, Homer gets saved by the most terrifying person in Springfield, whose identity I won’t spoil here. 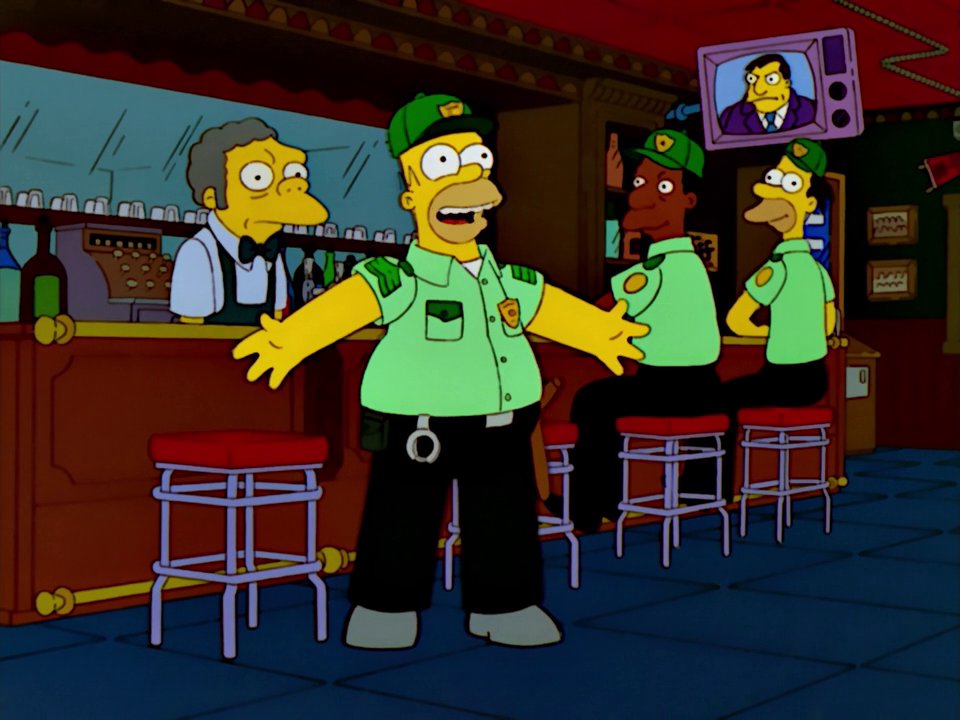 Everyone’s convinced that their political representatives are the worst ones in the world. And nobody is quite sure how/why celebrities have become influential political voices in society. This episode explores both premises when Krusty the Clown decides to run for Congress. 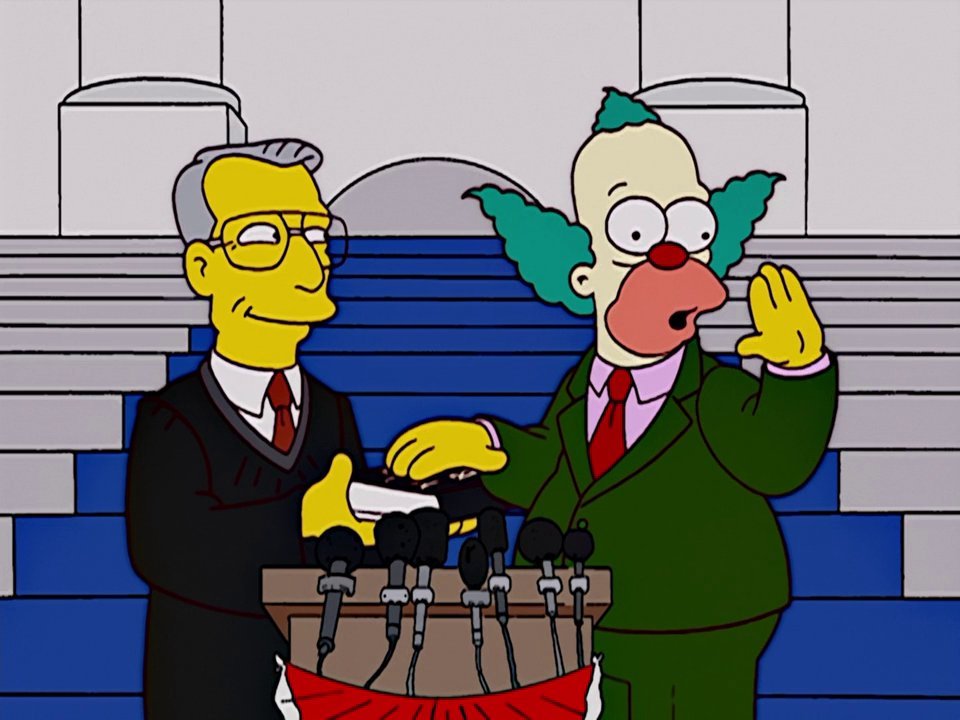 What’s his motivation? No, he’s not interested in making the world a better place. Instead, he wants to get the FCC off his back. Apparently, Krusty wants to swear more on his children’s television series. This episode is equal parts mega-cynical and laugh out loud hysterical.

Best line: “Why, this news makes my blood boil, my left arm feels numb, my mouth tastes of copper! Arrgggh!”

One of the most impressive stories ever comes at what’s currently the midway point of the series. Lisa Simpson grows frustrated when C. Montgomery Burns buys up all major media outlets.

The evil billionaire wants to control his press. Lisa ain’t having it, and so she starts her own paper, The Red Dress Press. It’s a powerful statement about the power of the people to control the medium. 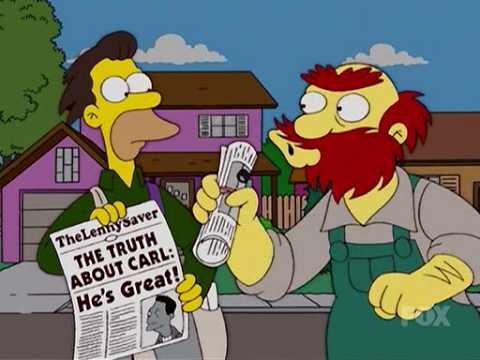 Best line: “Thank you, Blood and Tears. Sorry to hear about Sweat.”

What happens when Homer Simpson thinks that he’s received a message from God? That’s the premise here when the dumbest guy in town watches Left Below, a Left Behind parody.

Homer performs some calculations and determines that the Rapture is only days away. The entire citizenry of Springfield unexpectedly believes him after one of Homer’s wild predictions, the stars falling from the sky, occurs. Homer the prophet is an idea that the show has explored a few times, but this one is probably the funniest.

Best line: “It came to me in a religious vision. Or maybe it was a drunken haze. Or possibly an ice cream headache.”

The Simpsons are going to India! About once a season, the family takes a vacation, whether planned or not, to some exotic locale. In this episode, the entire Springfield Nuclear Plant gets laid off, except for one lucky person. 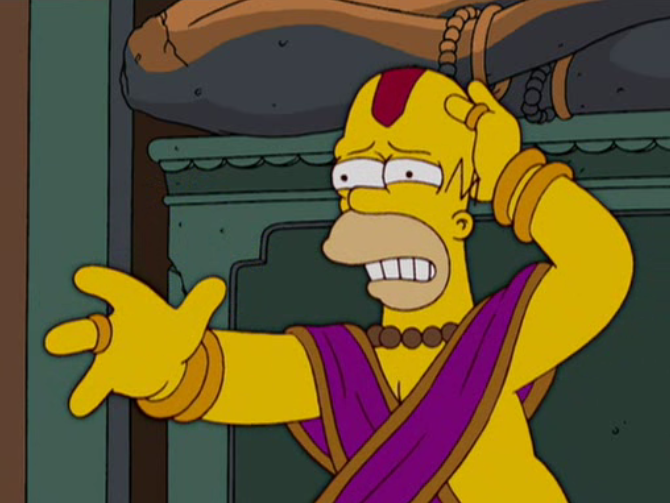 Homer survives the culling because that’s what he does. Once he gets to India, Homer discovers that his management style works well…but the real reason why you should watch is that Waylon Smithers gets to do a Bollywood dance in the end!

Holiday episodes are more than just an annual tradition on The Simpsons. I’ve listed no Treehouse of Horror episodes here since I presume you’ve seen those. Out of the Christmas episodes, one of them stands way above the rest.

In Kill Gil, the struggling salesman helps Lisa get the gift that she wants. However, the decision costs Gil his job. He winds up staying on the family’s couch throughout the holidays. 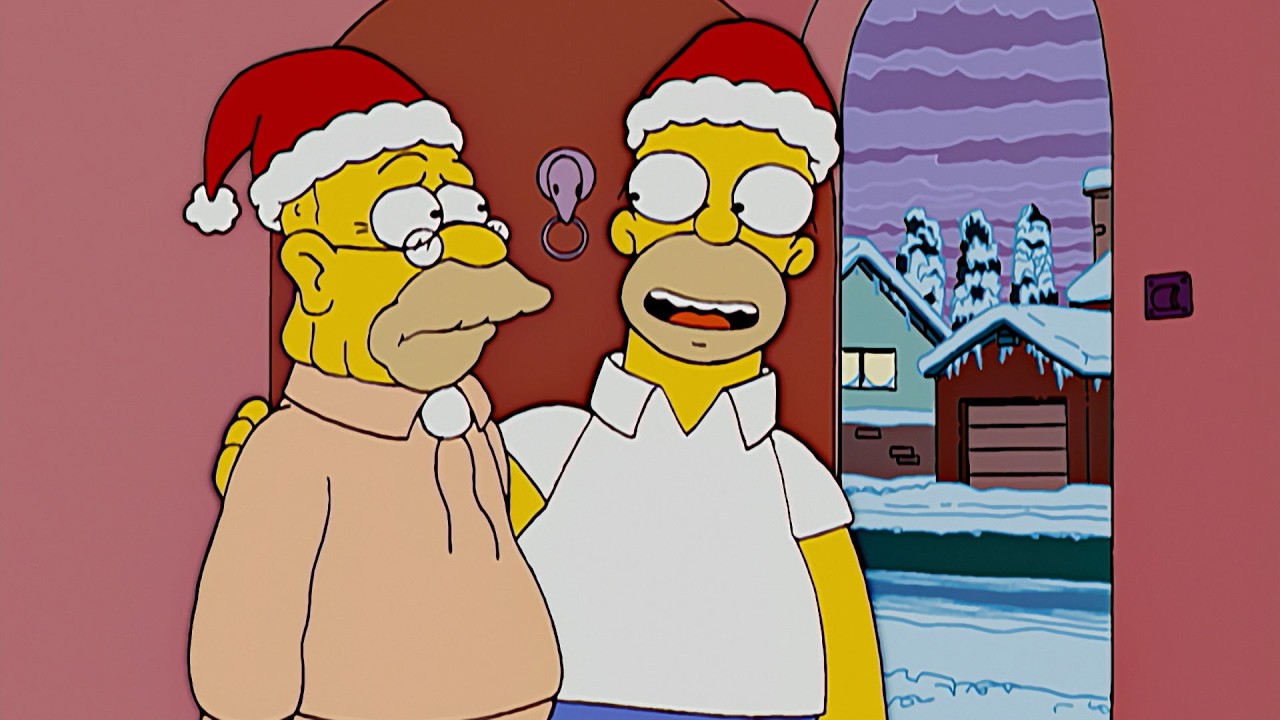 Despite his previous generosity, Gil gets on everyone’s nerves. But none of this really matters compared to the genius bit in the episode. Homer feuds with The Grumple, and it’s spectacular.

By this point, most people have played some sort of computer app on their phone/tablet. In Marge Gamer, our favorite housewife gets addicted to Earthland Realms, an MMORPG that seemingly everyone in Springfield plays.

The shock comes when Marge learns the identity of the evilest character in the game. You can probably guess who that is. The episode does a terrific job in mining the addictiveness of RPGs for laughs. 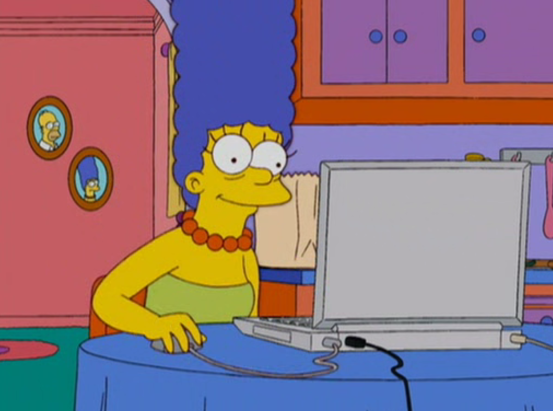 PS: Homer’s side quest in this episode is so funny that the show returns to it in season 25’s 16th episode, You Don’t Have to Live Like a Referee.

Best line: “I watched hours and hours of soccer. I almost saw a goal!” 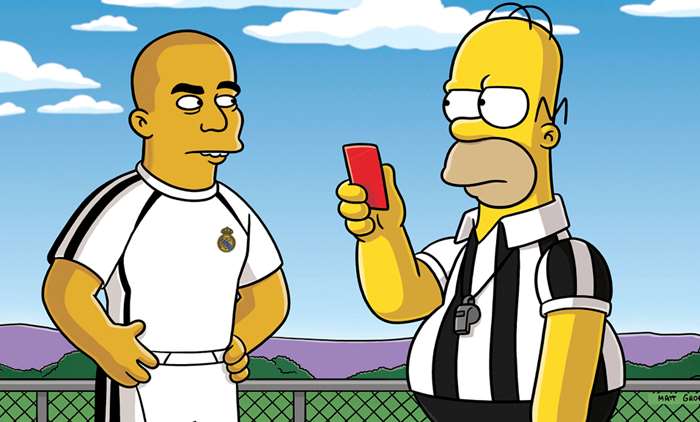 The Simpsons lampoons The Da Vinci Code in this episode, wherein a group of nuns kidnaps Maggie. They do it because she’s apparently the child of prophecy. Maggie can somehow lead the nuns to a gem that will turn the world into a perfect utopia.

The Simpsons want their baby back, though, and they don’t care whether it costs world peace to retrieve her. The show’s writers are clearly in their element here, as they harvest every potential gag from Dan Brown’s writings. And the payoff for this story will leave you in stitches.

Oh, and Disney wants to save you a lot of time. You can watch this video, which compiles their favorite Disney references over the past 30 years of The Simpsons.\