Those are the first words Anakin Skywalker spoke to Padme Amidala on Tatooine. However, if Baby Darth had met Angel Giuffria Annie wouldn’t have had to ask.

A staple follow on #StarWars Twitter, Angel Giuffria is a self-described #BionicActress. A congenital amputee, Giuffria is also one of the biggest, brightest shining lights on social media. And the multitalented media maven is someone to bear watching over the next few years.

She IS An Angel

Or, make that, watch in the next few minutes:

The Resistance needs heroes like Angel. She grew up watching Star Wars with her dad and brother, and as someone with congenital limb difference, felt that Luke Skywalker was one of the first positive examples of representation she saw. She loves the Star Wars universe because it always felt inclusive to her.

I can finally talk about one of the coolest days of my life! I got the amazing opportunity to experience #riseoftheresistance at #galaxysedge before opening with my fellow lightsaber wielding bionic partner in crime @bionicauthor. This experience was absolutely mind blowing and I still have a hard time articulating what it meant to me. My parents were cracking up watching how genuinely excited and in awe I obviously am throughout this piece. My mom maybe cried, but that’s just my mom I swear. I can’t say thank you enough to everyone who made it possible and if you’re interested in seeing the whole spot, the link is in my bio! ✨🦾😍🤘🏼 – Creative by @disneyyellowshoes Directed by @emilysheskin @byt.nyc AD: @groc257 @setjunky77 My amazing agents at @kmrtalent @leslierenee3 @kmrgail @lyndseystaib – Prosthesis: @armdynamics Lightsaber: @saber_forge – – – #ResistanceReady #StarWars #riseoftheresistance #lightsaber #amputee #limbdifference #representationmatters #disabilityinclusion #inclusion #ipreview via @preview.app

Last year Giuffria was profiled on Yahoo! Lifestyle after none other than Mark Hamill noted Angel’s fandom.

A photo featuring a public speaker and actress cosplaying as a Jedi from Star Wars is going viral, and even Luke Skywalker has taken notice.

Angel Giuffria, a “Bionic Actress,” shared a Thursday photo of herself cosplaying as Jedi Leia, complete with a lightsaber attachment for her bionic arm. The photo gained widespread attention online, including from actor Mark Hamill, who played Luke Skywalker in the film franchise.

I can’t even put into words how your response makes me feel. Thank you so much. For everything. For just being you; a supportive talented role model. Not giving up is the plan but on the hard days when it crosses my mind, I’ll remind myself that Luke/@HamillHimself said I can’t❤️

“I can’t say I wasn’t hoping he’d notice me when I tagged him in the post but when he actually did, I had to let it sink in,” Giuffria told Yahoo Lifestyle. “I found myself ‘happy crying’ in my hotel room at him being such a kind and supportive role model.”

Giuffria was born without her left arm below the elbow and has worn a prosthetic hand her entire life. And she has always wanted to cosplay as Jedi Leia, integrating a lightsaber arm.

With the help of her friend, Trace Wilson, who is also a congenital amputee, along with Saberforge and Touch Bionics by Ossur, Giuffria’s vision would become a reality.

Repping Rise of the Resistance

And now, thanks to “Star Wars: Rise of the Resistance“, Giuffria (currently recovering from surgery) has a chance to grace the screens of so, so many Star Wars fans. 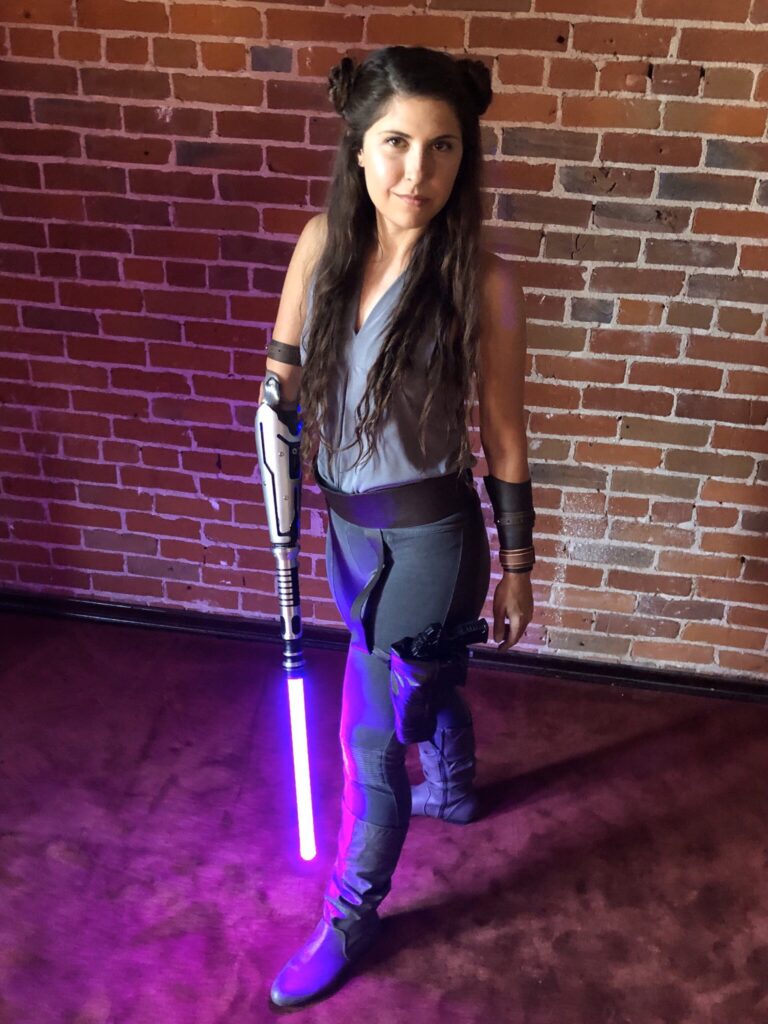 “Our world is filled with differences and the media is doing a disservice to everyone by not accurately representing our diverse and beautiful world,” Giuffria told Yahoo. “I love acting and I will fight for being ‘just an actress,’ but I am also an actress with a disability, and I think that’s so cool and wonderful.

I hope to possibly help anyone with differences to feel represented and tell stories that people haven’t yet been able to see!”

May The Force be with you, Angel! Here’s hoping you are up and at’em ASAP.

so far i’ve had a slimy neck massage (ultrasound), a long camera down my throat to check my vocal chords, & next up is the thyroidectomy.
About to head into surgery,
see y’all soon.