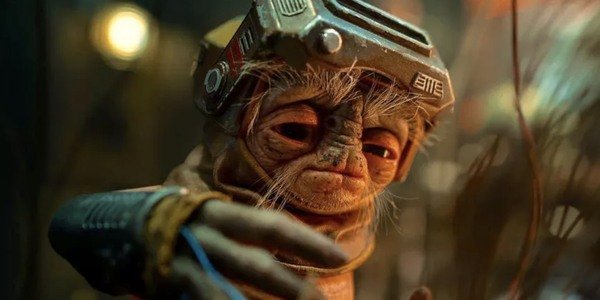 Though Baby Yoda has become a cultural phenomenon since the premiere of The Mandalorian last November, there’s a new Star Wars character hot on The Child’s heels! Since the Rise of Skywalker premiered over the holidays fans both young and old have been won over by a new character- Babu Frik. The fervour over this colorful Droid mechanic who plays an important role in the film has reached fever pitch with many (including actor Josh Gad) calling for a spinoff series focusing on the character.

This loveable Anzellan droidsmith is voiced by actress Shirley Henderson and has quickly found his way into our hearts and memes! This is leading many a fan to daydream about a possible future for the character:

I can’t wait for the Babu Frik spinoff series on Disney+.

The only Rise of Skywalker spinoff I want is Babu Frik’s Droid Garage. It’s a reality show where he spends the episode fixing up a droid or two while narrating everything he’s doing in just as little English as the film.

And here’s our favorite:

GIVE US A BABU FRIK AND BABY YODA BUDDY COP SPINOFF YOU COWARDS @Disney pic.twitter.com/H2iuYLflMA

With The Rise of Skywalker still making bank at the box office, its early days in terms of what the future may hold for this new character that has captured the hearts and imaginations of Star Wars fans! But we have a distinct feeling that we’ve not seen the last of Babu Frik!

Thinking about a visit to Disney in 2020 to check out Star Wars: Galaxy’s Edge? Getting started couldn’t be easier! Fill out our form below to get your FREE, no-obligation quote! Book before January 31, 2020 and I’ll even throw in a Disney gift card!