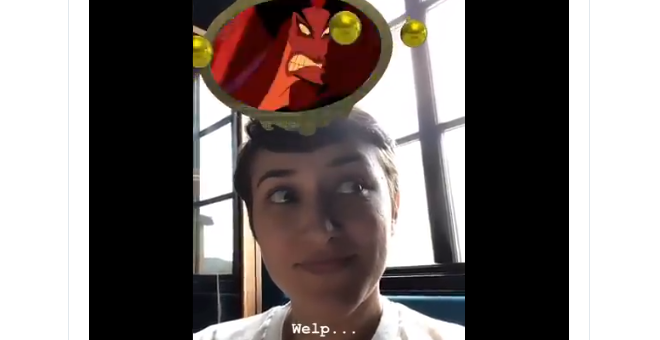 If you spent any time on Instagram over the holiday weekend then you know that a new Disney filter has gone viral! Created by user Arno Partissimo, the filter will show you what Disney character you most closely resemble.

The filter works by scanning a user’s face before landing on a Disney character.  Instagram is filled with images of users giving the character generator a go. In some instances, decisions seem to make sense, others have left users scratching their heads, and some have even branded the selections racist.  Videos of people reacting to their designated Disney characters are making the rounds on social media sites, like Twitter.

Watch what happens when Zelda Williams daughter of late comedian Robin Williams decides to give the filter a whirl.

As you know, Robin Williams originated the role of the Genie in Disney’s original animated version of Aladdin which is the character picked by Zelda when using the character generator. Though she takes it all in good fun, giving off a little laugh, it is actually quite touching!

Many users are happy with the selections:

Thought I’d try out the which Disney character are you filter pic.twitter.com/LbLKmSSPxJ

While others are admittedly a bit shocked:

That filter "which disney character are you?" said I was Quasimodo 💀

And some even questioned the selection process:

The which disney character filter on instagram is cyber bullying me pic.twitter.com/dMwLG2UhVO

Interested in finding out what Disney character you most closely resemble? You can find the Disney character filter by searching under the “Browse Effects” option listed among your face filters.  Also, keep following along with MickeyBlog for more fun Disney news and updates!