Guests Jump on Stage of Carousel of Progress and Cause Damage

Perhaps his lumbago was acting up. Maybe he had one too many cold sasparillas.  Either way, things got a bit out of hand at the Carousel of Progress Saturday night.

Two people jumped on stage during Act 1 on Walt Disney World’s Carousel of Progress. Stunned guests looked on as one guest was tackled by another guest on the attraction.

Here are some of the Tweets people shared after the incident occurred.

An incident occurred tonight on Act 1 between two people, damages to the show did occur.
It’s unknown to us at this time if Carousel of Progress will be operating tomorrow.

Scott Gustin took to Twitter to provide details of the incident on the beloved attraction.

Some info. about the Carousel of Progress incident earlier tonight:

Two guests jumped on stage around 6pm Saturday. One of the guests was "disoriented" and tried to jump through a stage window.

CMs handled situation well, ride evacuated, no injuries and no damage to ride.

Photo of the Carousel of Progress damage: butter churn was broken, rug got scooted around, and the muslin on the left has a hole in it. #DisTwitter

Here is video that user @BugSurgz posted on YouTube which shows exactly what happened.

While we’re not quite sure exactly why this happened, it certainly wasn’t good. Speculation is running rampant on the Twitterverse. 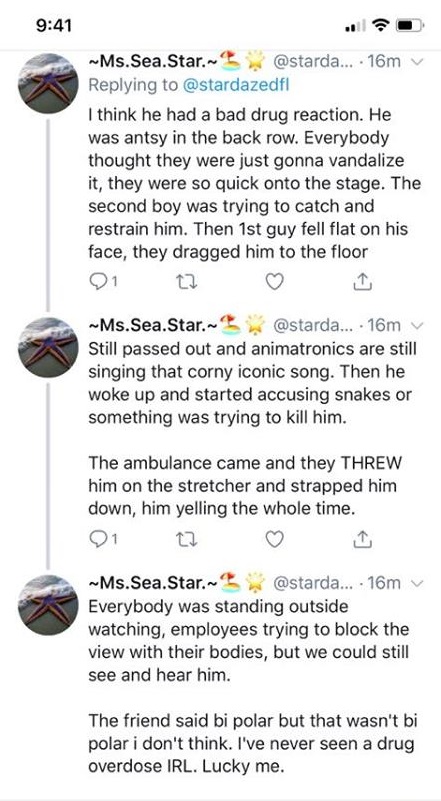 It appears now that Carousel of Progress is back up and running after being shut down after the incident.

Carousel of Progress is still operational tonight even after the earlier stupidity #CarouselOfProgress #DisTwitter https://t.co/TrqFnt5B0P

Stay tuned to MickeyBlog.com for additional updates as they come in! There’s a great big beautiful tomorrow!