Star Wars: Galaxy’s Edge opened at Disneyland on May 31, 2019. Just over four months later, we have enough information to draw some conclusions about Disney’s most ambitious themed land ever. Here’s everything we’ve learned from four months of Star Wars Land.

How great is Star Wars: Galaxy’s Edge? I’ve watched guests wander the streets of Black Spire Outpost as if they’ve gained admittance to The Good Place. In fact, for some people, Star Wars Land IS The Good Place. 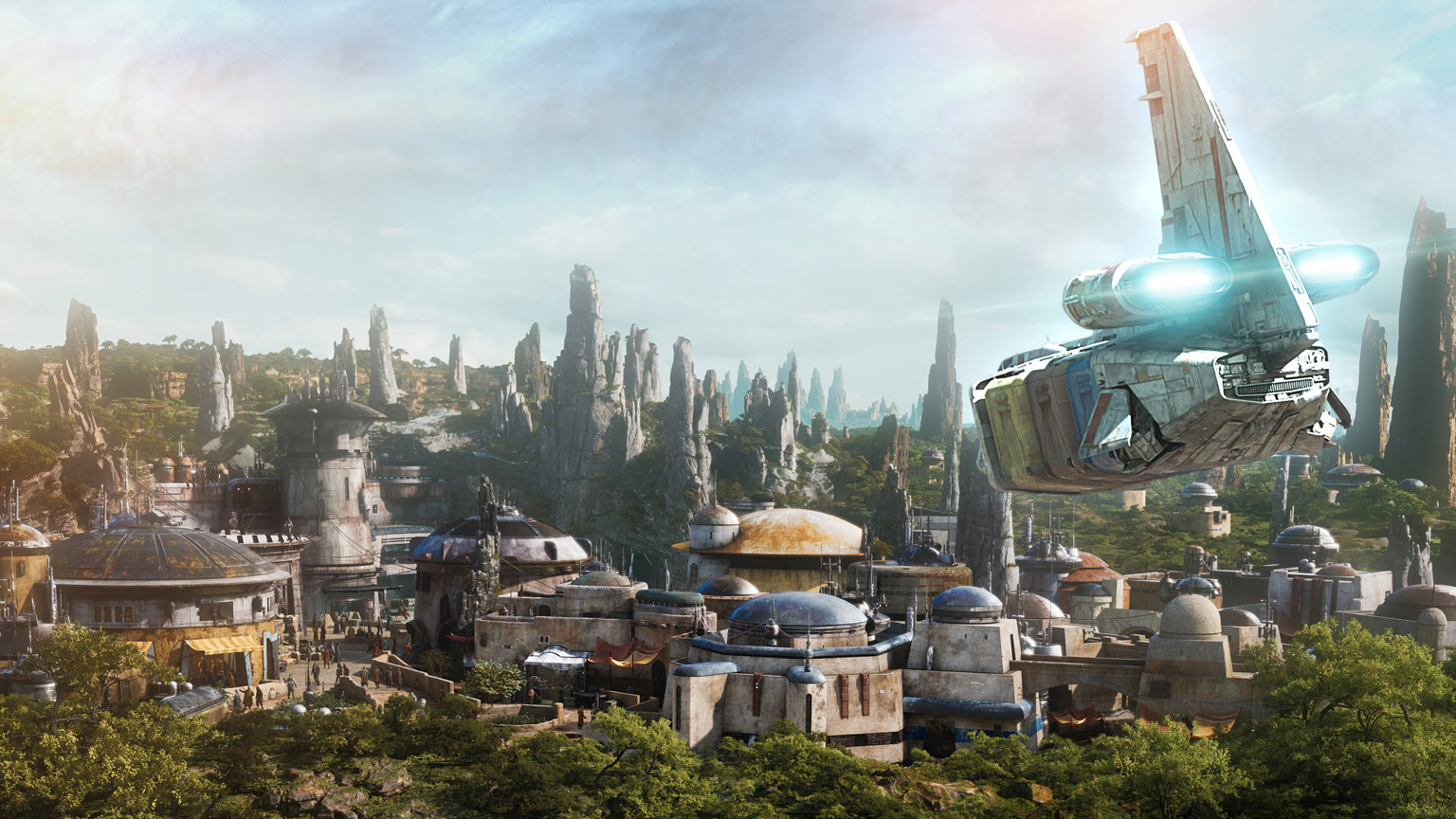 The authentic touches and degree of immersion stagger first-time visitors, leaving them in a daze. Some folks are even reduced to tears. The experience is that moving to some.

Imagineers have built a believable alien world at the Happiest Place on Earth. The bit of civilization here is called Black Spire Outpost, the most popular settlement on the planet, Batuu. Every aspect of this themed land has a purpose and tells a story. 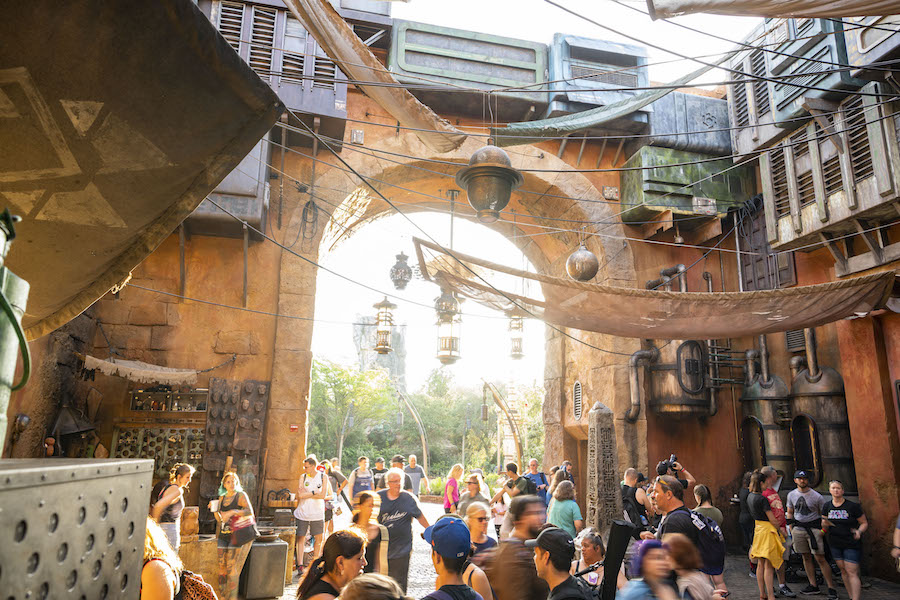 You’ll find twin encampments on the sides of the outpost. On one end is the forest area where The Resistance has taken up residence. On the other side is the place where The First Order recently expanded its presence. Black Spire Outpost sits in the middle of this explosive landscape.

During a Galaxy’s Edge visit, you’ll appreciate the smallest details, such as bullet holes on the walls. This place survived more than one air assault and has the scars to prove it. As you wander the land, you’ll forget that you’re at Disneyland because the immersion is so effective. Instead, you’ll believe that you’re shopping at the bazaars of an alien civilization. 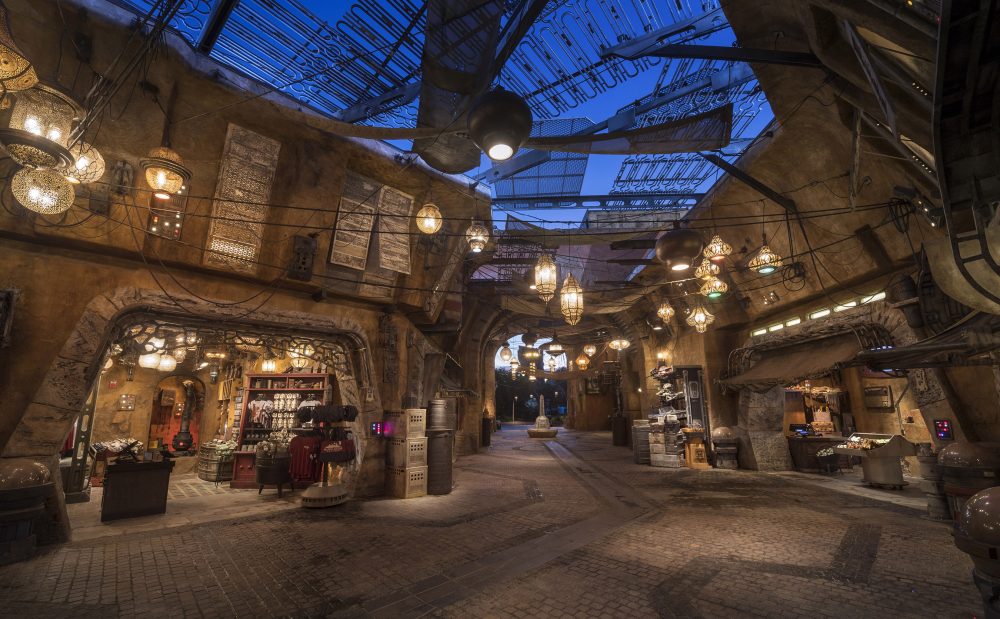 Disney seemingly mastered realism at Pandora: The World of Avatar. However, Imagineers have somehow outdone themselves with Star Wars Land. It’s the ultimate in theme park escapism.

The Specialty Stores Are Popular 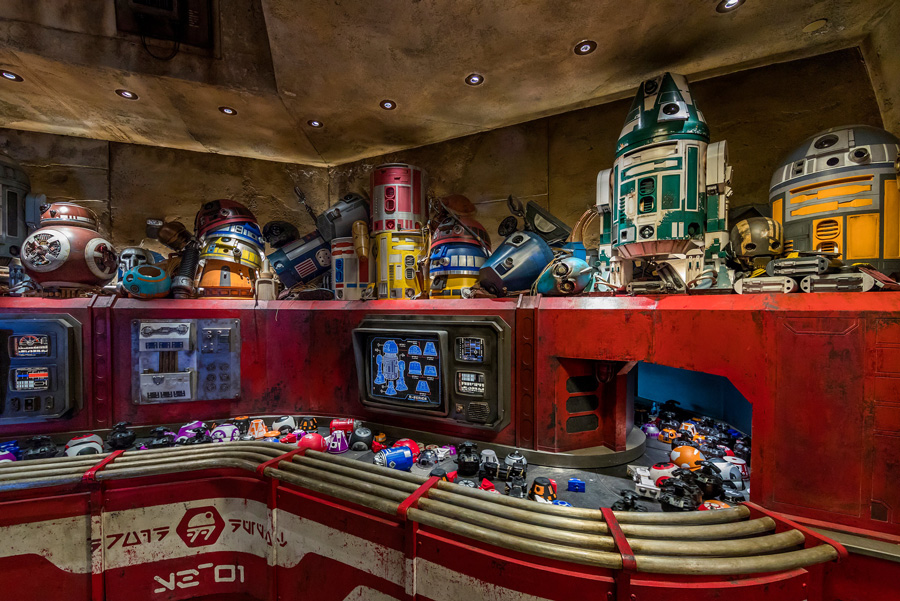 Galaxy’s Edge is home to four such locations. When you plan a visit here, please understand that one attraction, one bar, and two stores will have the most significant crowds. The attraction is obviously Millennium Falcon: Smugglers Run, which we’ll discuss in the next section. You’re going to ride this when you visit the land. It’s automatic. The other three experiences could work differently.

Oga’s Cantina, Savi’s Workshop, and the Droid Depot are the places to be on Batuu. You should understand that none of them is cheap, though. Droid Depot is where you can either purchase a pre-made droid or construct your own. The latter option costs $100, but you have complete control in deciding the parts. It’s a rare form of personalization that’s unprecedented at a theme park. 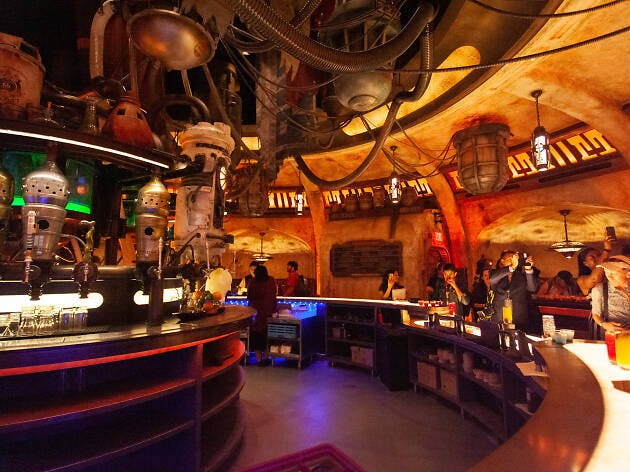 Interestingly, you have the same ability at Savi’s Workshop. This presentation is more lavish. You’ll enter a special building where a Jedi master will train you in how to wield The Force.

This session takes about 20 minutes, and you’ll spend part of it picking out the pieces for your very own lightsaber at a cost of $200. Both the droid and the lightsaber are singularly unique since the potential combinations are in the millions. They’re not cheap, but they are cool. 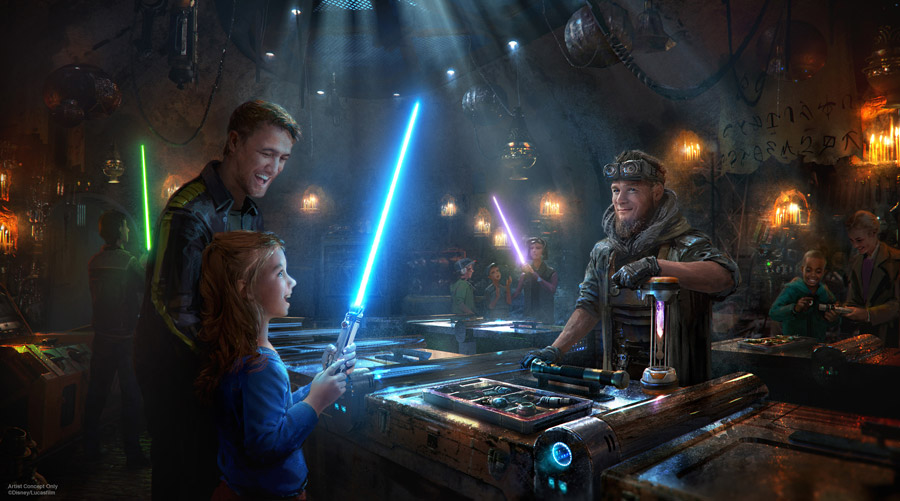 And Everyone Loves the Intergalactic Bar

The other point-of-interest with sustained popularity is Oga’s Cantina. This bar recreates a famous scene from Star Wars. It’s when Luke Skywalker meets Han Solo and Chewbacca for the first time. In the background, an alien musical act plays a memorable tune as other aliens interact.

This scene is one of the seminal ones from the 1970s, and Oga’s Cantina celebrates it. The bar provides earworm-y music and alien grub plus a lot of strong drinks. 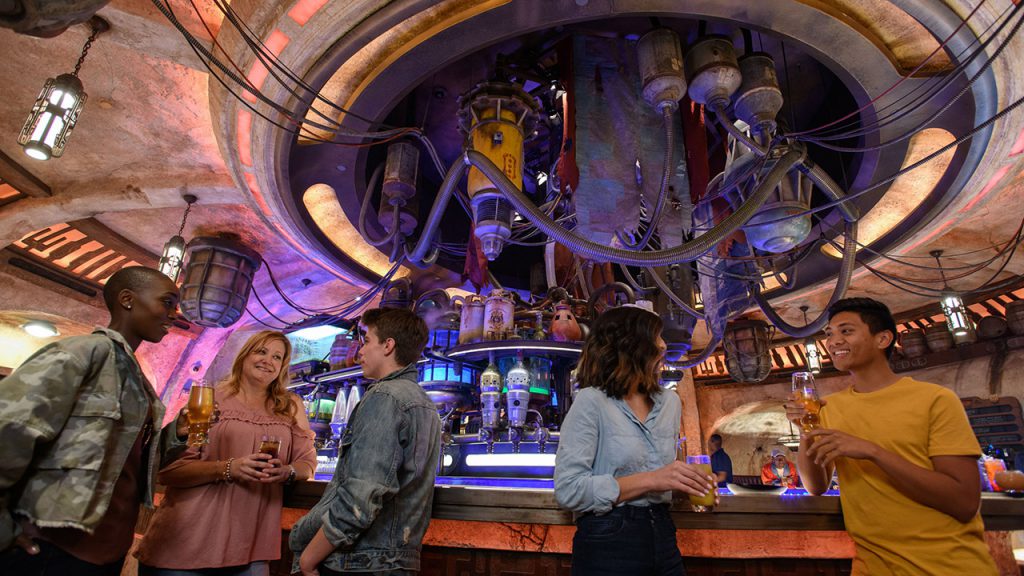 Our old friend, R3X from Star Tours, has thankfully switched jobs and become the DJ here. Guests love to listen to his work while they drink alcoholic and nonalcoholic beverages alike. The crowds here have been so crazy that Disney requires reservations in advance. Remember to get one if you want to visit.

When Disney announced that Star Wars: Rise of the Resistance wouldn’t open on time, some people freaked out. Park insiders weren’t worried, though. They knew that they had an attraction that could anchor any themed land. 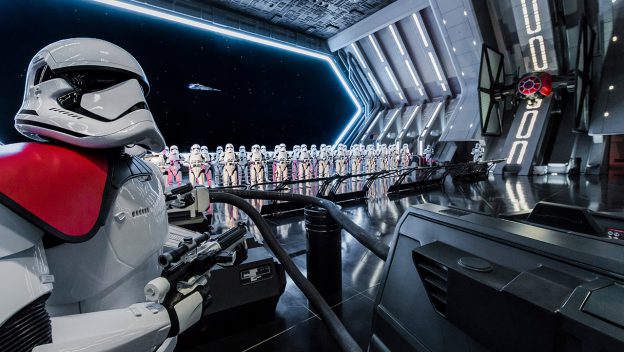 Millennium Falcon: Smugglers Run marries some of the ideas from Soarin’, Avatar Flight of Passage, and Star Tours. Excitingly, the sum is greater than the parts. It’s an interactive motion simulation attraction that varies based on performance. So, the ride works on two levels.

At its core, Smugglers Run allows you to live out your dream of piloting the Millennium Falcon. You’re one of six guests who enter the cockpit and operate the ship. At the risk of mixing sci-fi staples, it’s like Star Trek in that you and your friends take the bridge of the vessel. And its success or failure is up to you. 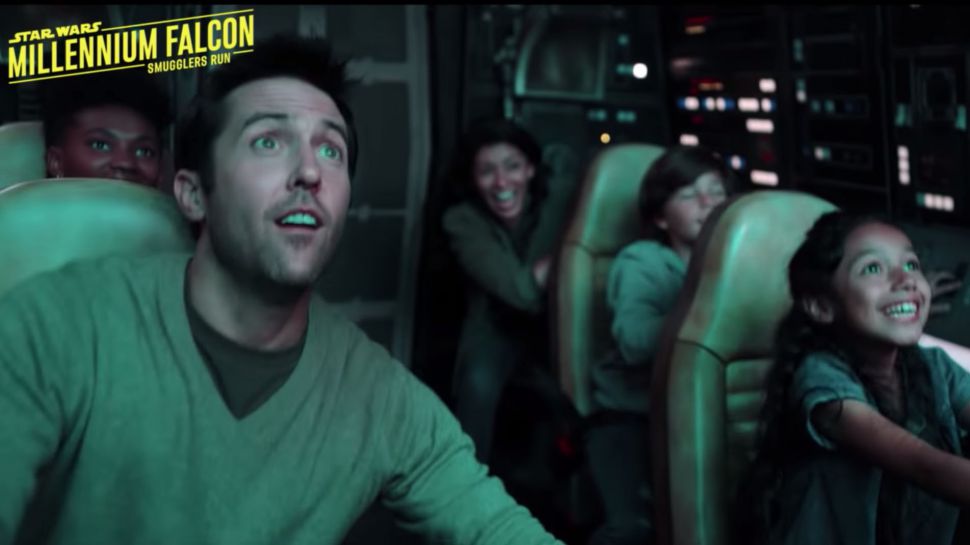 The erratic nature of Smugglers Run is the second way that it works. Your performance matters. When your crew excels, you’ll experience more of the attraction. For this reason, you’ll adore the repeat value of the ride. You may need to visit for years to master the Millennium Falcon. That kind of lasting appeal will sustain the attraction’s greatness for many years to come.

The Food Isn’t for Everyone

Okay, this topic has become divisive in Disney circles. The food on Batuu is decidedly alien. Imagineers wanted to maintain the level of immersion everywhere at Star Wars land. Yes, that includes the cuisine. 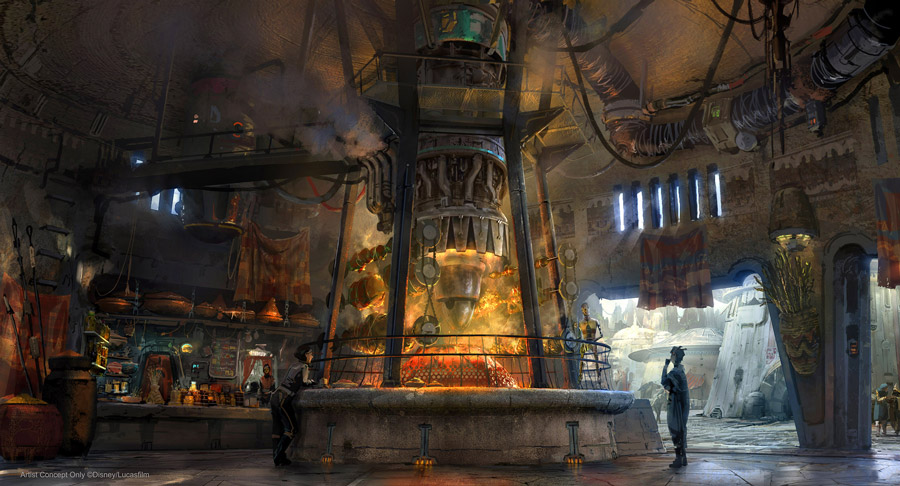 You don’t eat Earth food at Black Spire Outpost. On the contrary, you dine on animals and plants indigenous to Batuu. Anyone who wants a cheeseburger is out of luck. Sadly, for all of its many wonders, this planet lacks cheese or cows.

When you grab a meal at Galaxy’s Edge, you’re accepting that you’ll live dangerously with your ordering. You’re trying adventurous recipes the likes of which you’d never find at Cracker Barrel. For a lot of guests, especially foodies, this aspect is appealing. To those with more selective palates, it’s problematic. 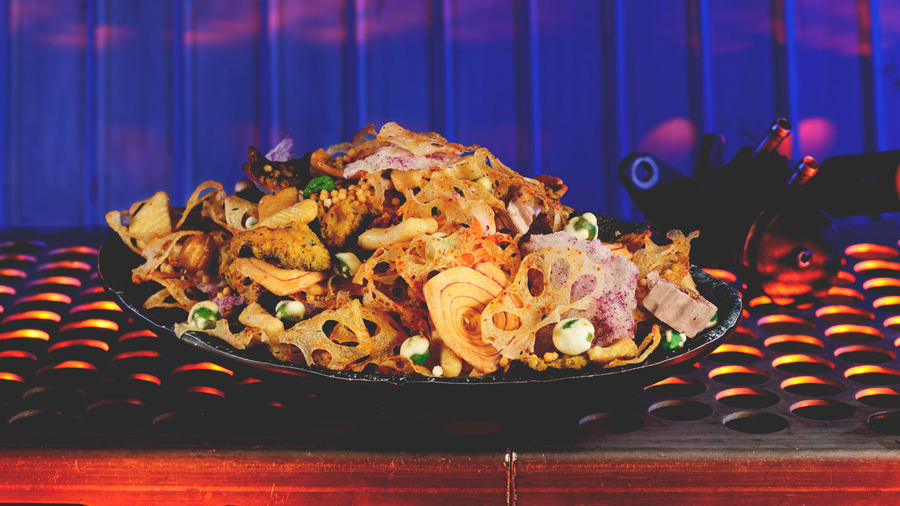 Personally, I think the problem gets overstated. Anyone who wants standard theme park entrees can walk to ABC Commissary or BaseLine Tap House.

The Crowds Will Surprise You

I’ve saved the most shocking and controversial aspects of Star Wars Land for the end. The open secret, one acknowledged by Disney’s upper management, suggests that crowds at Black Spire Outpost aren’t significant. 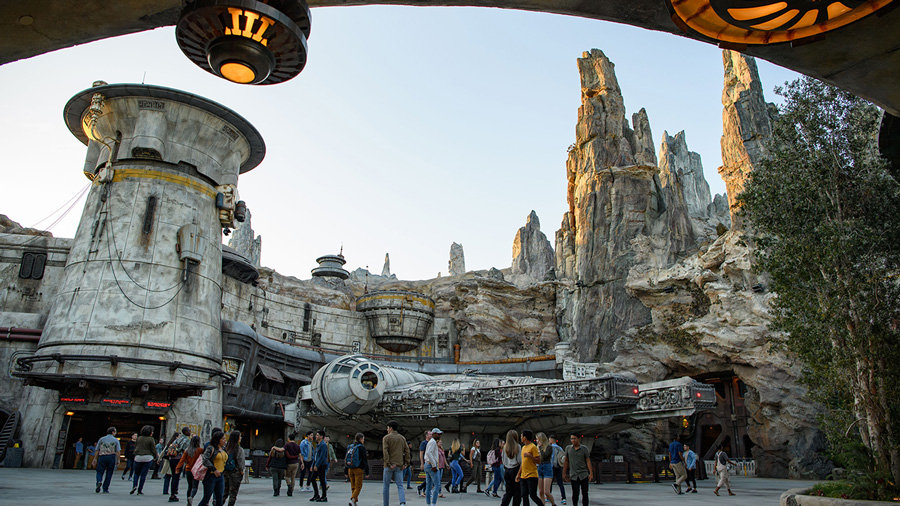 Last year, I compiled a roundtable of Disney experts. The subject of projected Star Wars Land crowds was something they discussed. To an individual, they emphatically believed that Disneyland would seem mobbed for months, if not years afterward.

I later spoke on this subject with many others involved in Disney’s various cottage industries plus some financial experts. Literally no one would argue against massive crowds at Batuu. 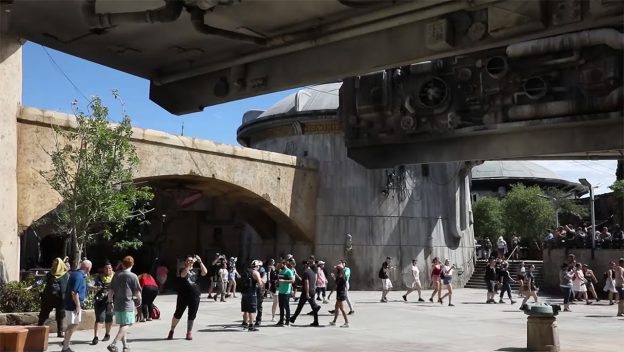 Somehow, that hasn’t happened. On the contrary, Disney’s suffered through several almost apologetic media cycles wherein they’ve explained how that’s by design. The company increased several standard theme park costs as a tactic to discourage everyone from visiting immediately.

The strategy worked too well. Now that we’re well past its opening month, prices have stabilized, but crowds have remained modest. Even now, you can safely plan a trip to Disneyland, knowing that you’ll enjoy a delightful vacation without competing against a slew of ravenous Star Wars fans. Disney has the crowds squarely under control. 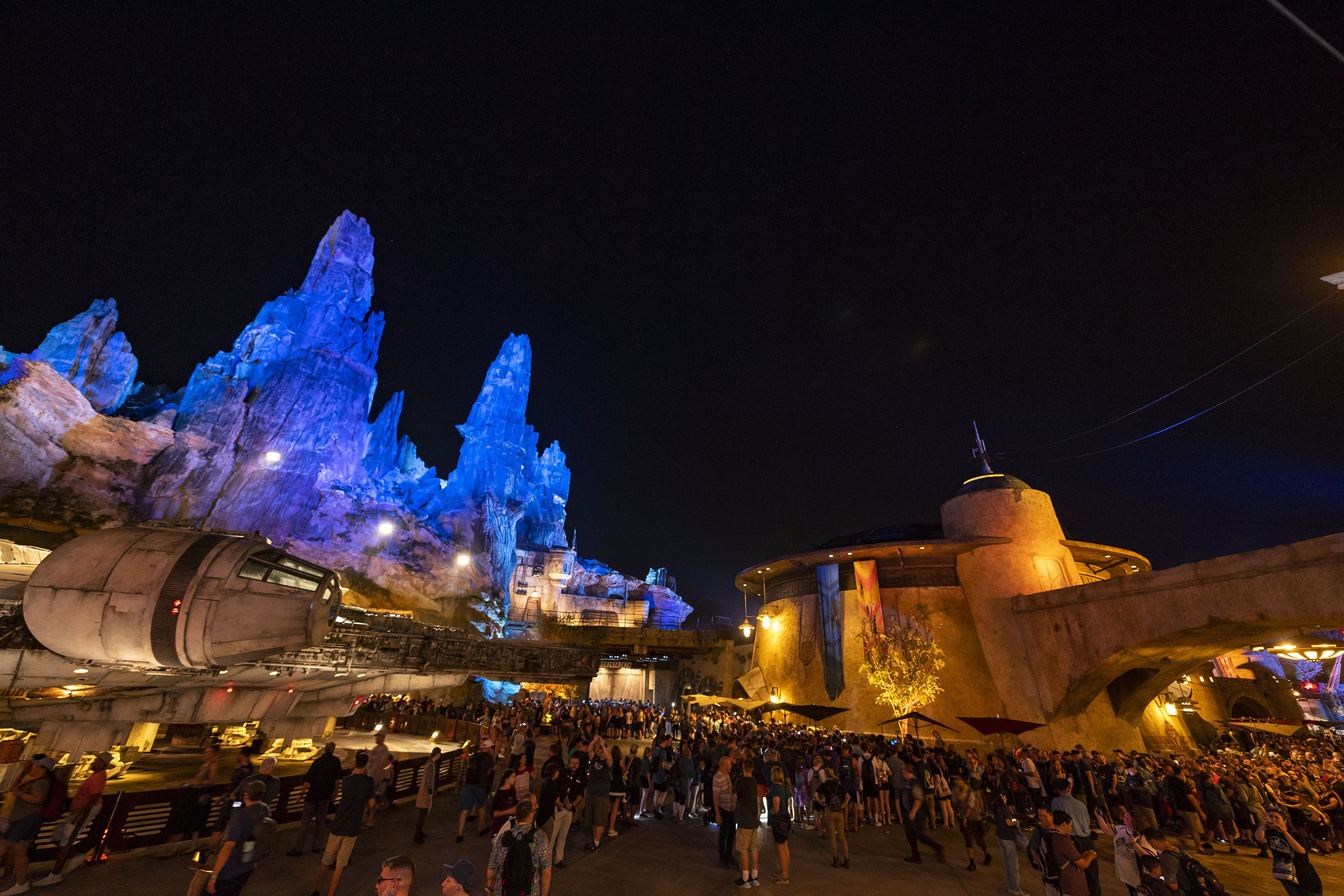 When you’re at Galaxy’s Edge, you will have your choice of any number of splendid entertainment options. And you won’t face an endless horde of people to experience them. For this reason, it’s the perfect time to plan a vacation to the Happiest Place on Earth to live out your Star Wars fantasies. Contact an agent at MickeyTravels to find the ideal time to visit. Nobody knows Star Wars Land better than them, and their services are free to you!