Earlier this year we told you about Disney’s Designer Ear Collection. The idea is that each month a new designer, brand or celebrity would release an exclusive limited-edition set of Mickey Ears! So far we’ve seen incredible contributions from the likes of Alex and Ani, Betsey Johnson, and more.   This month, we’re excited to share a look at ears that are a showstopping as the supermodel that came up with them – the Designer Mickey Ears by Heidi Klum.

Available beginning on Saturday, September 28th, Klum will release her own design of limited-release Minnie Mouse ears at Disneyland Resort. The headband will be available at Disneyland, Disney World and on shopDisney and are some of the sparkliest ears we’ve seen as of yet!

“Bedazzling the most famous ears in the world is like a dream come true for me. I am still pinching myself,”  said Heidi Klum. “To all Mickey and Minnie fans–I hope you love wearing them as much as I do.” 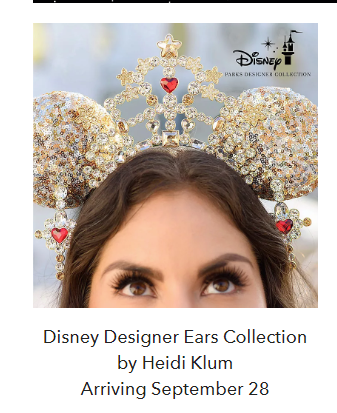 And bedazzled they are. Retailing for $600, the ears will feature over 150 Swarovski crystals and will come in at 1/2 a pound.  They are part of a limited-release so pick yours up while supplies last. You can check them out at the following locations:

To officially launch her new design, Heidi Klum will also be visiting Disneyland Resort tomorrow for a special appearance at The Disney Dress Show in Downtown Disney from 2pm – 4pm.