Truth. Ad Astra was not on my radar until very, very recently.

And, coming off his stellar acting in Once Upon A Time In Hollywood, Brad Pitt’s new astronaut thriller will — this week — rocket me to a theater during what should be a severe lull in the Disney schedule.

And, thanks to 82% on the ‘ol Tomatometer, I am sure to have some company when I sit down — popcorn in hand — hoping for something that moves me as much as Christopher Nolan’s Interstellar or Stanley Kubrick’s 2001: A Space Odyssey. From the reviews I’ve seen, that comparison is apt for Ad Astra.

The autumn movie season has a history of hosting impressive, thought-based science fiction movies. To a list that includes Gravity, Interstellar, Arrival, and The Martian, add Ad Astra, a film that uses space exploration as a means to look inward at the essence of humanity.

This isn’t the sort of motion picture that will energize those who associate sci-fi with space battles, phaser blasts, and alien invasions. It demands patience and attention. One can sense an attempt by filmmaker James Gray to tap into the vein mined by Stanley Kubrick in his classic 2001: A Space Odyssey. Of recent films, Christopher Nolan’s Interstellar is the best comparison. Ad Astra isn’t quite as strong but it’s in the same ballpark. James Berardinelli, ReelViews

Brad Pitt, fresh off his turn in Once Upon a Time…in Hollywood, joins Matthew McConaughey, George Clooney, and Matt Damon as matinee idols-turned-space farers. Pitt’s capabilities as an actor have never been in doubt and, given a project of this nature that relies strongly on his performance (none of the supporting actors, including Tommy Lee Jones, Donald Sutherland, and Ruth Negga, has more than a handful of scenes), he provides viewers with another reason to remember that he’s more than a pretty face. 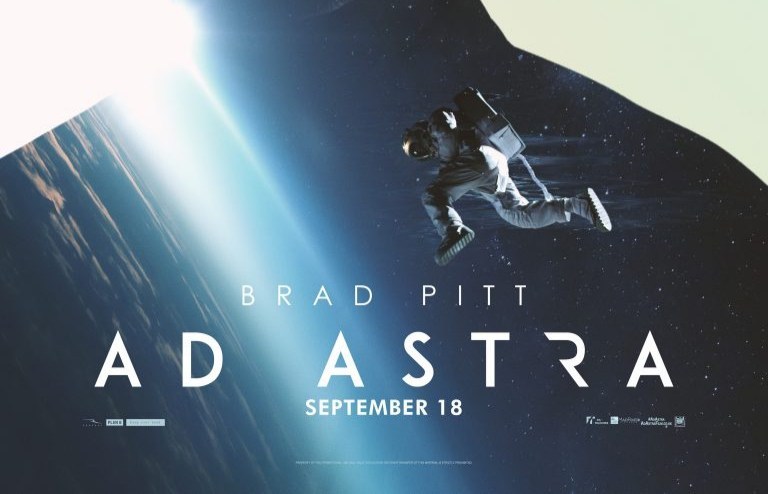 In English, “Ad Astra” means “to the stars,” but it’s precisely the film’s earthbound emotional truths that give it heft, meaning and grandeur. After Brad Pitt’s mellow, deceptively simple supporting performance in “Once Upon a Time in Hollywood,” this far more subtle and technically challenging turn reminds viewers yet again that a movie star who started as a pretty face and morphed into a thoughtful and daring producer has been a superb actor all along.

In a mesmerizing, minimalist performance, Pitt forms the gravitational center of a film that takes its place in the firmament of science fiction films by fearlessly quoting classics of the genre (as well as those outside it). The net effect is that “Ad Astra” feels both familiar and confidently of itself, all the more boldly affecting by being unafraid to acknowledge the forebears it explicitly invokes. Ann Hornaday, Washington Post

Fans of “First Man” will appreciate “Ad Astra’s” rattling opening sequence, when Space Command Maj. Roy McBride (Pitt) hurtles through near-space while building the world’s largest antenna on Earth. Anyone familiar with Joseph Conrad’s “Heart of Darkness” and Francis Ford Coppola’s “Apocalypse Now” will recognize the artistic DNA of Roy’s journey when he is assigned to travel to Neptune to retrieve a rogue astronaut (Tommy Lee Jones), who just happens to be his father. Admirers of such mournful futuristic meditations as “Gravity,” “Arrival” and “Solaris” will understand Roy’s somber reflections on grief and loss as he encounters feelings he has successfully compartmentalized for most of his life.

A car chase on the moon. Now, that’s something I haven’t seen before. Warmest congratulations to “Ad Astra,” therefore, for presenting a fresh spectacle to tired eyes. The cars in question are skeletal buggies, upgraded from the lunar rovers that the folks on the last three Apollo missions drove around, just for the hell of it. (And for the science of it, too. Honestly.) But the chase is a chase. We join a small convoy of rovers, one of them bearing an important passenger, Major Roy McBride (Brad Pitt). Merrily they roll along, across a bone-white prairie of nothing much. Suddenly, other buggies veer into view, intent on pillage, and theft.

Space pirates! Bring ’em on! There is a crash, an exchange of fire, and the alarming sight of McBride’s rover slewing over the lip of a crater. And the best thing about the scene? It’s practically noiseless. We might as well be watching a silent movie. One spaceman shooting another, it turns out, makes the same sound that your vacuum cleaner makes when it tries to swallow the rug. Anthony Lane, The New Yoker

“Ad Astra” is directed by James Gray. So tight was his staging of a car chase, through torrents of blinding rain, in “We Own the Night” (2007) that the only way to top it, I suspect, was to go off-planet. From “Little Odessa” (1994) to “The Lost City of Z” (2016), Gray has been brewing his particular blend of action and introspection. His characters tend to lose themselves in physical conflict or tests of endurance, only to draw back and lose themselves in themselves. McBride, in the latest film, is a case in point. In a breathless early sequence, he is seen toiling on the outside of the International Space Antenna, which resembles a giant stick insect suspended in the upper atmosphere; without warning, he is knocked off by a power surge and tumbles in free-fall toward terra firma. Elsewhere, though, he shows an aptitude for sitting still, staring shyly downward, and murmuring, “I will not rely on anyone or anything.” Brad Pitt fans, high on the bonhomie that he radiates in “Once Upon a Time . . . in Hollywood,” may well be flummoxed by this dual approach, and tempted to ask, What are you, dude, a rocket jock or a recluse?

Now, not all the reviews are stellar. Rafer Guzman of Newsday wrote, “Ad Astra may reach for the stars, but its own gravitas pulls it down.”

Fair enough, but have you looked at what’s available in the cineplex at the moment? I am thrilled to see if Ad Astra achieves liftoff. Check back for my review later this week. 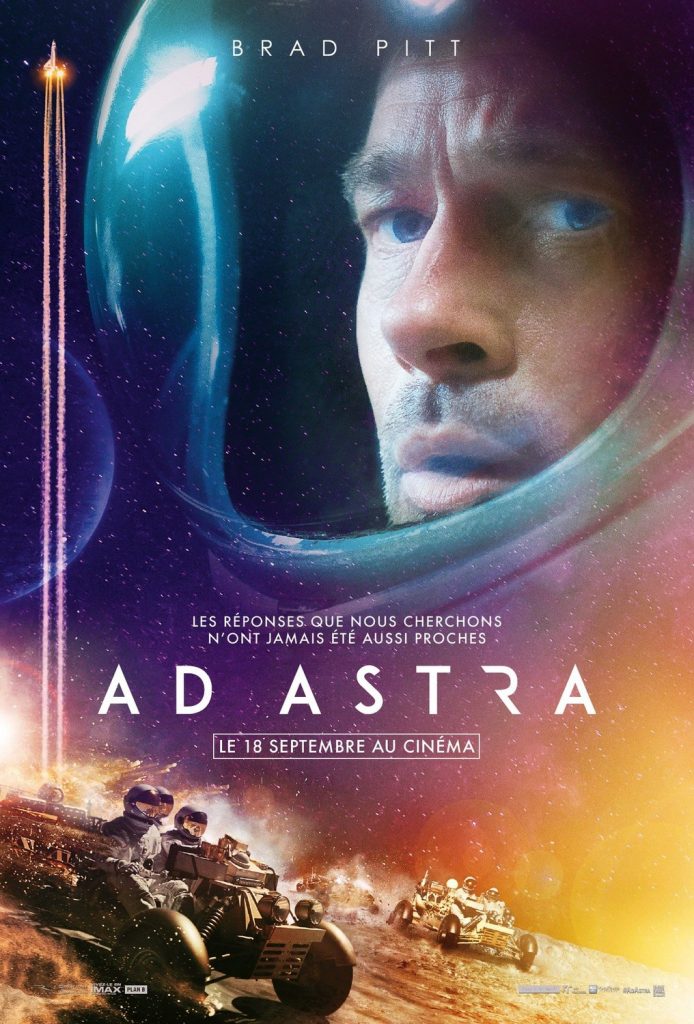