For decades, the Star Wars Holiday Special — which aired November 17, 1978 —  has held an open joke status among Star Wars fans. 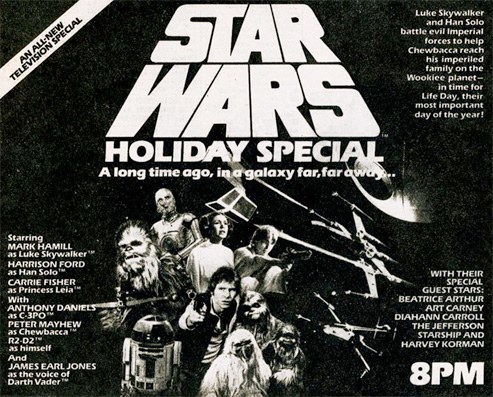 But George Lucas famously hates the Star Wars Holiday Special. He told StaticMultiMedia, “The special from 1978 really didn’t have much to do with us, you know. I can’t remember what network it was on, but it was a thing that they did. We kind of let them do it. It was done by… I can’t even remember who the group was, but they were variety TV guys. We let them use the characters and stuff and that probably wasn’t the smartest thing to do, but you learn from those experiences.”

Well, maybe not everyone learns from “those experiences.” Word is, that Jon Favreau (The Mandalorian, Solo: A Star Wars Story, Star Wars: The Clone Wars) wants to reboot the first-ever Star Wars spin-off; a television show, no less.

The Star Wars franchise is beloved among fans across the world. With multiple films, animated series, novels, comic books, video games, board games, collectibles, and action figures released over the last 40 years, there is a lot to love when it comes to the galaxy far, far away. But while one particular TV special lives on in infamy among fans, there are some who hold it in high esteem; we’re talking, of course, about the Star Wars Holiday Special. And if The Mandalorian showrunner Jon Favreau had his way, he’d get the chance to remake it.

While speaking with Entertainment Tonight at the Saturn Awards this weekend, Favreau explained that he wants Disney+ to let him tackle that oft maligned entry in the Star Wars franchise.

“I would love to do someday, maybe on Disney+, we’ll do a Holiday Special too. Wouldn’t that be wonderful?” Favreau said. “I gotta pitch that to them. We’ll see. If you wanna see a Holiday Special, let Disney+ know!”

IDK. I think I have a better idea: Reboot Mark Hamill’s appearance on The Muppet Show:

You heard it here first.