Star Wars: The Rise Of Skywalker – What’s With C3PO’s Eyes?

For such a quick clip, there’s been a whole lot of reaction to “D23’s Special Look At Star Wars: The Rise Of Skywalker.”

And yes, Rey’s apparent Dark Side turn has many fans wondering what the heck is happening with the Sequel Trilogy’s hero. However, the short segment showing C3PO’s eyes glowing red sent fans to speculate.

In case you haven’t seen it, here’s the clip:

Over at WeGotThisCovered.com, Christian Bone broke down the moment with a tongue in cheek tone:

The new Star Wars: The Rise of Skywalker trailer shown at D23 was released online today, and fans went crazy over the final scene which apparently reveals Rey going to the Dark Side. But another good guy is seemingly breaking bad in Episode IX, too, as one-shot showcases C-3PO with red eyes. Seeing as red is a color associated with the Sith, like Rey’s new double-edged lightsaber, we’re left to assume that the fussy, comical droid is set to be possessed by evil.

In the absence of any official clues as to what’s going on here, SW fans have shared their theories on social media – some more serious than others. For instance, what if Threepio’s not possessed and it just turns out that he’s been on the Dark Side all this time?

He even had a red arm back in The Force Awakens. The clues have been there all along, people. And we thought Jar-Jar Binks was the one we couldn’t trust.

Now, even though Mr. Bone is laughing along with many of us, it’s not as if red eyes don’t mean anything for droids in Star Wars.

In fact, one of the most terrible entities in Star Wars canon is an “evil” protocol droid named “Triple Zero.” That robot is most often found in Marvel Star Wars Doctor Aphra comic. 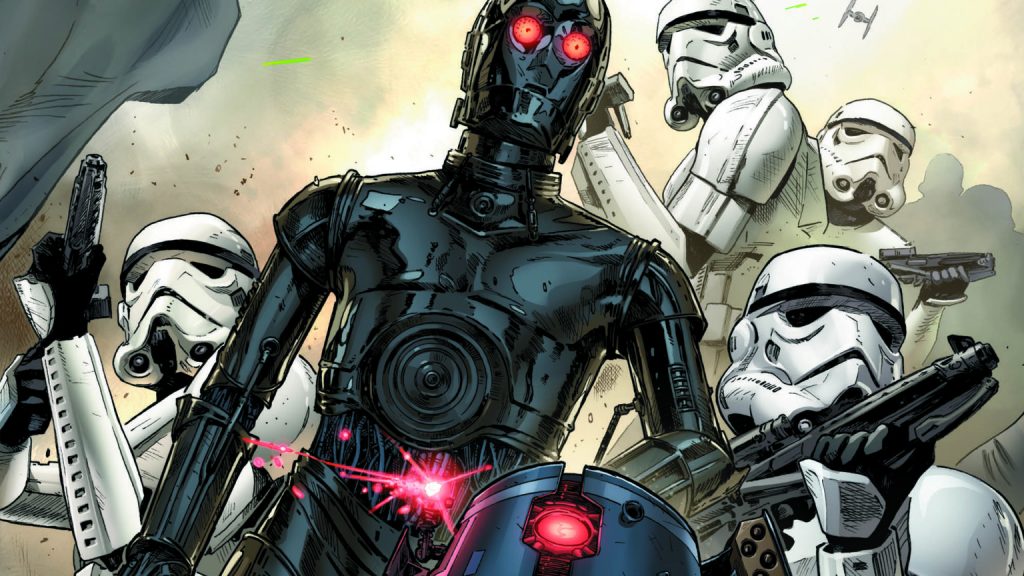 Scouring the internet, there are a few other theories. My first thought was that C3PO is plugged into a targeting computer. But it’s all just guessing at this point.

The bottom line? I can’t wait for December!

What are your thoughts about this scene in the trailer? Let us know in the comments.