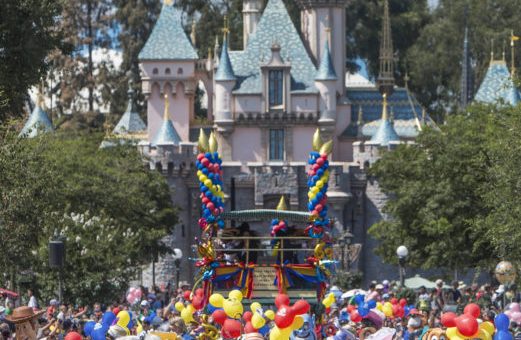 “To all who come to this happy place, welcome!” Can you believe that tomorrow marks 64 years since Disneyland Park opened its gates? When Walt Disney came up with his dream it was for a place where families could play together. Today it has grown to become multiple, world-class resorts where families and friends enjoy vacations around the globe. Crazy! It’s in this spirit that Disneyland Park continues to touch more lives than ever with its largest expansion ever, Star Wars: Galaxy’s Edge.

With imagination and innovation, the single park in Anaheim has expanded to become the Disneyland Resort, with two renowned theme parks, nearly 100 exciting attractions, three hotels and the shopping, dining and entertainment area known as Downtown Disney District.

Disneyland will commemorate its role as the original Disney theme park Wednesday, July 17, with festivities that include the “Happiest March on Earth” down Main Street, U.S.A. Mickey Mouse and Minnie Mouse will make a special appearance along with beloved Disney characters.

The July 17 festivities are only part of the fun this summer. For a limited time, guests may see Mickey Mouse and his friends join the Disneyland Band for performances of “Mickey and Friends Band-Tastic Cavalcade” at Disneyland. This delightful procession will run twice daily, from July 18 through Aug. 1, featuring live music and a host of favorite Disney characters.

Beginning Aug. 2, the beloved “Main Street Electrical Parade” returns to Disneyland for a limited-time, bringing guests of multiple generations a sense of wonder, joy and – for some – warm nostalgia. This popular nighttime parade will travel down Main Street, U.S.A., each night through Sept. 30.

Guests will also enjoy the ninth and newest land at Disneyland, Star Wars: Galaxy’s Edge. Guests may live their own Star Wars adventure as they are transported to a galaxy far, far away, on the remote planet of Batuu. Guests will sample galactic food and beverages, explore an intriguing collection of merchant shops and take the controls of the most famous ship in the galaxy aboard Millennium Falcon: Smugglers Run.

For a limited time, Disney California Adventure is celebrating the beloved characters and music of Disney’s “The Lion King” with an imaginative new adaptation of this timeless story, presented as a highly-theatrical outdoor musical production entitled, “Tale of the Lion King.” The show features a cast of performers who form an ensemble called the Storytellers of the Pride Lands. This traveling troupe specializes in retelling revered stories in their own contemporary style, weaving their tale through language, song and dance.

Pixar Pier, the whimsical land where stories and characters from Pixar films come to life, celebrated its first anniversary in June. Inside Out Emotional Whirlwind, a new attraction on the Pier, is inspired by the Disney and Pixar film, “Inside Out.” Guests step into the world of Riley’s Emotions – Joy, Sadness, Fear, Disgust and Anger – and board one of eight Memory Movers for a sense-ational spin. Guests at the Pier are also enjoying the rootin’ tootin’ fun of  Jessie’s Critter Carousel, and encountering characters such as BoPeep and Woody.

The aerial adventure Soarin’ Over California has returned for a limited time, through Aug. 31. This virtual tour celebrates the beauty and wonder of the Golden State. Guests are raised high into the air and surrounded by an immersive, 80-foot projection dome to simulate the graceful motion of flight, while their senses are teased with iconic scenes and scents found throughout California.

A Place Where Dreams Come True

The popularity of Disneyland through the past 64 years celebrates Walt Disney’s dream of a place where family members of all ages can have fun together in a safe, clean atmosphere that emphasizes imagination and extraordinary guest service. Since 1955, dignitaries, heads of state, celebrities and more than 800 million guests have passed through its gates.

As part of the tribute to opening day, a recording of Walt Disney’s speech will be played again on July 17, 2019: “To all who come to this happy place, welcome!  Disneyland is your land. Here, age relives fond memories of the past, and here youth may savor the challenge and promise of the future. Disneyland is dedicated to the ideals, the dreams, and the hard facts that have created America, with the hope that it will be a source of joy and inspiration to all the world.”

With that goal, Disneyland transformed the amusement industry. It delivered an entirely new concept in family entertainment: a “theme park” where rides, shows and characters become part of a total storytelling environment. Creativity, technology and innovation continue to bring stories to life, while fulfilling Walt’s promise that “Disneyland will never be completed … as long as there is imagination left in the world.”