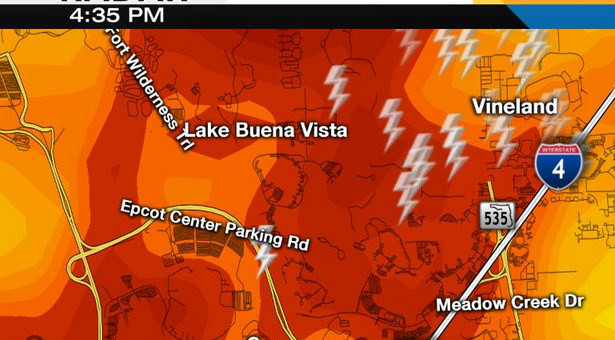 A Monday afternoon storm in the vicinity of Walt Disney World caused a “power glitch”  that shut down several attractions throughout the resort.

Disney World is getting rocked right now. A Significant Weather Advisory is in effect there until 5 P.M. This storm has Pea Sized Hail, Winds higher than 40 MPH, Heavy Rain, and Lots of Lightning. #Disney pic.twitter.com/pcXj6F5JYe

The power loss was confirmed by a late Twitter interaction:

Due to the recent storm in the area, we experienced a power glitch and are in the process of reopening our attractions. We appreciate your patience. Thank you!

Many in the park were affected:

God rain really ruins everything. I was going to see an Indiana Jones show at Disney World Hollywood Studios, but the rain made it so I could only see the first scene. I also had a Fastpass booked for Toy Story Mania but that is closed, I’m assuming because of the weather. Ugh.

And that includes our own Greg Antonelle, who captured the storm (as well as a mid-ride shutdown and walk off of the TTA Peoplemover into the backstage of Magic Kingdom) on Facebook live (around 50:00 – some glitchiness in the feed):

UPDATE [7:30 PM]: Greg reports that he was just on “Pirates of the Caribbean.” However, “Haunted Mansion” and “The Hall of Presidents” remain closed.

If we hear anything else, we’ll update!