Toy Story 4 made its big debut over the weekend with overwhelming praise from both the fans and the critics. But it’s not just the characters that stole the show. The sets built by the Pixar team were just as dynamic as the toys they supported. One of the biggest changes for this film was that the aspect ratio increased from it’s series predecessors. Previously fans expereinced the Toy Story franchise with the aspect ratio of 1.85:1. Toy Story 4 created a larger depth of field with an aspect ratio of 2.39:1. “It’s a wide-screen format that gives us a different look for the film. We want to give the audience a more cinematic experience,” director of photography Patrick Lin explains. “Having little toys in this format makes them feel even more lost, which fits the story.”

“These sets are characters in their own right,” sets shading lead Ling Tu says. “They interact with the main characters to help draw the story forward. If you take away the detail, you will feel that a little bit of something is lost.” 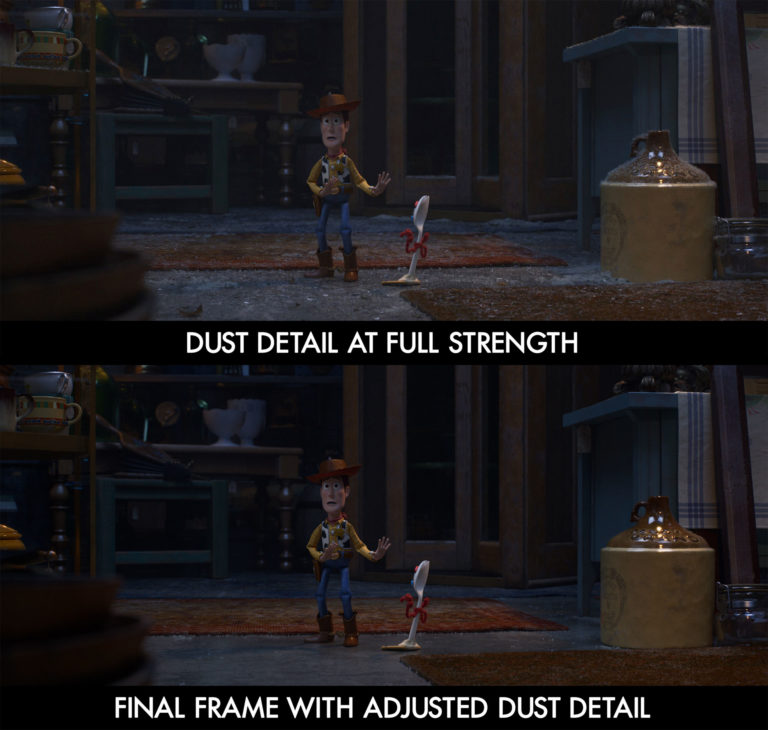 Toy Story 4 opens with a steadfast Bo Beep (voice of Annie Potts) leading a rescue mission in the midst of a rainstorm: One of their own has been left out in the rain and the toys are determined to save the day. It’s a feat of animation, particularly for those who had worked on Toy Story (1995) and didn’t have the tools to create a similar effect for a scene involving Woody (voice of Tom Hanks) and Buzz Lightyear (voice of Disney Legend Tim Allen).

“We couldn’t do rain interacting with characters or rain interacting with a set,” global technology supervisor Bill Reeves says. “We had to make some design choices: What could we do within the context of the tools we had?” The team devised an “elegant” solution, production designer Bob Pauley says. By painting rain clouds in the sky and making the street appear wet, it sold the effect. While rain didn’t touch anything, Pauley notes, there was a “beautiful effect on the window.”

What a difference 24 years makes. Toy Story 4’s prologue required a downpour to stage the drama for the toy’s rescue—and Bo’s eventual departure. The team dedicated considerable resour­c­es to develop the technology behind the realistic rainfall that appears now onscreen. “It’s critical to show the lengths the toys go to,” Pauley emphasizes.

Later in the film, Woody finds himself in an antiques mall. This location happens to be the most elaborate set in Pixar’s history. “To a toy, an antiques mall feels like a city, so we built an antiques mall that was 8,000 square feet with more than 10,000 items for sale,” sets supervisor Thomas Jordan says. “All of the items are arranged by theme. There are rugs, which indicate where customers will be walking around so the toys know to avoid being seen, and lots of places for them to hide.”

Because a single prop can take hours to weeks to create, fans might spot Easter eggs—like the throne from Brave, a scream canister from Monsters, Inc. and the Eiffel Tower from Ratatouille—sprinkled throughout the mall. In addition to visiting nearby stores, sets technical director Rosie Cole relied on memories of her family’s antiques mall to ensure the props felt genuine, meaning the objects had defects like chips, rust and scratches.

To bring some reality to the highly stylized Toy Story world, Pauley says, “We’ve added more complexity, more richness, to give you a sense of place and atmosphere.” To achieve that, Reeves explains, “We added dust particulate in the air… which led to visually pleasing bokeh effects.” Dust, in fact, is one of the elements the team is most proud to feature in Toy Story 4. “This was a detail that was initially saved for specific scenes,” Tu says, “but it was so successful in enriching every environment that we ended up putting it all over the entire antiques store.”

Because toys are the driving force of the story, the audience is literally seeing things unfold from their perspective—in this case, two inches from the floor. “We use these details to draw you into the character’s point of view,” Tu explains. “Since sets don’t talk, they don’t have an opportunity to tell you their story, so we use visual language to give them a voice of their own.”

The team starts off with a clean set. “Then, we throw a layer of dust on all the objects themselves and add some dust bunnies, miscellaneous debris, hair and fur,” Tu says, adding that software can add or diminish the amount of dust in a given area with a few simple clicks. Says sets supervisor Stephen Karski, “It’s something you might not notice unless it was missing.” 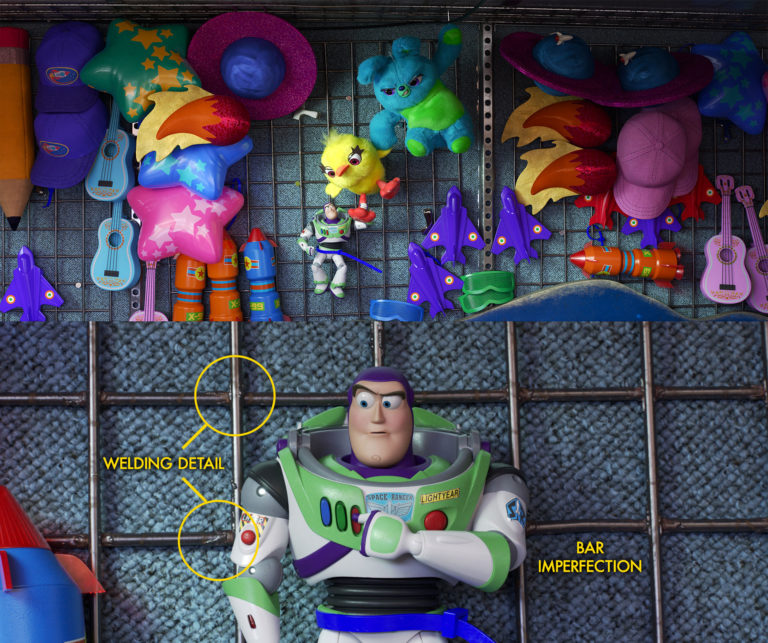 Toy Story 4 also features cobwebs—a lot of cobwebs. Jordan describes how one animator wrote a program simulating an A.I. spider building cobwebs: “He guided the spiders to where he wanted them to build cobwebs, and they’d do the job for us. And when you see those cobwebs overlaid on the rest of the scene, it gives the audience the sense that this place has been here for a while.” Without that program, animators would have had to make the webs one strand at a time, which would have taken several months. “You have to tell the spider where the connection points of the cobweb should go,” Jordan says, “but then it does the rest.”

While these details may be subtle, they make a world of difference in creating a sense of believability. That being said, Pauley notes, “All these skills and tools are there in service of the story. If we don’t have a great story to tell, all the tools in the world aren’t going to help you.”