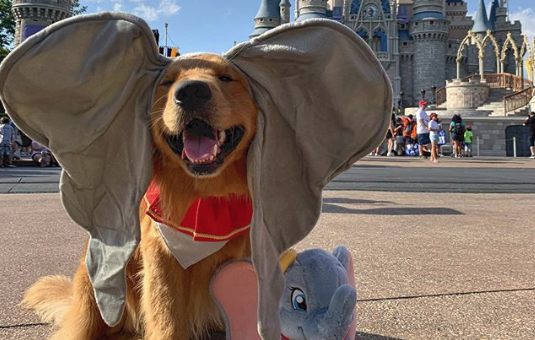 Move over Pluto- Meet Henry! This adorable service dog was recently featured in an article by ABC news who fell in love with this 2-year-old Golden Retriever after following along with his Disney trip via an Instagram account set up by his handler Jessica Paulsen

This playful pup has been having some Disney bucket list moments including having a Starbucks at the Magic Kingdom:

And here is Henry posing with his owner and Kevin from the much-loved Pixar film Up.

“We were interviewed by Good Morning America, oh yes we were.” They covered our recent adventure to Disney World and we’re so excited to share it with you. This was Henry’s second time meeting Kevin and he loved every minute of it.

Henry’s handler, Jessica, hails from Nashville, Tennessee and has postural orthostatic tachycardia syndrome, aka POTS, a condition that affects circulation and can lead to an increased heart rate, lightheadedness and fainting. Henry helps Paulsen when there’s a drop in her blood pressure. He is also trained to alert others if she begins to faint.  Paulsen started posting photos fo Henry on Instagram back in 2017 and the account now has nearly 65, 000 followerss.  Jessica and Henry also recently appeared on “Good Morning America” to share their adventures with viewers!

Sometimes it’s easy to get caught up in your dogs job. We forget that even though they’re with you 24/7 that doesn’t mean they’re WITH you 24/7. Think about how your human relationships would struggle if all you did was sit together in silence, sure you’re together but relationships aren’t that simple. It’s the same with your working dog. Things can become mundane, a trip to the grocery store, the doctor, school and back again. You’re relationship can become stagnant and you can begin to miss the personality of the animal that is right by your side. I can tell when this is happening with Henry because he begins to task more slowly, his ears will lay down and back instead of their regular position, all things someone else wouldn’t notice. This is when I know I need to invigorate our relationship and our training. What I’ll often do is take him to the park to train but we’ll switch up our reward. We’ll play games that incorporate his tasks at a faster and more exciting pace. He can be clumsy and rambunctious and the goal is just to have fun together. He’ll be rewarded with treats, toys or a wrestling match (which he always wins). When he gets bored of retrieval we’ll switch into searching and then recalls, I let him lead. When we first faced this I wasn’t sure what to do or what was wrong. No one talks about this part of having a service dog. It’ll be different for every team but working through it is one of the most rewarding parts of being a TEAM.

This was their sixth trip to Walt Disney World, and it’s actually good training for Henry as it helps him learn how to look after his handler in big crowds! And what do Paulsen and Henry think of all of the attention?  Paulsen says that she strives to show all facets of Henry’s life to raise awareness about service dogs and to eliminate misconceptions people have about the use of service animals.

But that’s not all!  Earlier this week, another service dog created a bit of buzz online when she paid a visit to Hollywood Studios at Walt Disney World! Meet Sparrow!  This beautiful golden retriever resides in the United Kingdom and is training to be a service dog. Her owners also run an Instagram account tracking her progress! They recently took Sparrow on a trip to Florida and paid a visit to Star Wars Launch Bay where this loveable pup and Chewbacca became fast friends:

A special meet and greet was arranged between Sparrow and Chewie in a private area. Here she was able to mingle with this famous Wookie! But that isn’t the only character Sparrow was smitten with. Based on a recent article in the NY Post, we’re told that this canine companion also got to meet Jessie from Toy Story and they also became fast friends!

Even though people are becoming increasingly skeptical about the role service dogs play, Paulsen gives us an important reminder that the work they do is important. An owner may not always look sick but that doesn’t mean that there isn’t an underlying condition making being able to bring a service dog into the parks invaluable. We hope you’ll give a big shout out to any service dogs you see during your next Walt Disney World visit.

Thinking about a visit to Walt Disney World? Getting started is easy! Simply fill out our form below to get your own FREE, no-obligation quote from MickeyTravels.