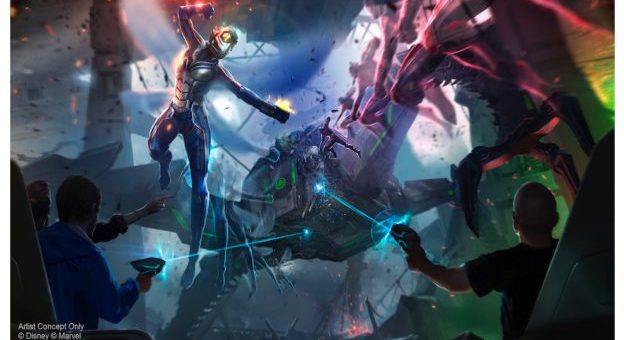 Have you seen “Avengers: Endgame?” After taking in over $2 billion worldwide, chances are likely that you have! Even though this might be the final chapter at the movies, the Avengers are setting up headquarters all over the world at the following Disney Parks:

Recruitment is scheduled to begin next year at Disney California Adventure Park but check out everything that is known so far as you prepare to suit up alongside the Avengers!

Even though recruitment at Disney California Adventure Park in Disneyland isn’t beginning until 2020, you can still get in your Avengers fix at a Disney Park now if you are up for a trip to Hong Kong Disneyland! A few months ago, the interactive Ant-Man and The Wasp: Nano Battle! made its much-anticipated debut. This new rides marks the second Marvel-themed attraction at the Park and is the first to feature a female Super Hero as the lead character. The first Marvel attraction to open at Hong Kong Disneyland was the Iron Man Experience and is part of the continued development of an ultimate hub for Super Hero action in the region as part of Hong Kong Disneyland’s multi-year expansion.

And, not to be forgotten, there’s already a Marvel-themed attraction here stateside. If you haven’t checked out hugely popular Guardians of the Galaxy – Mission: BREAKOUT! at Disney California Adventure park, you are missing out!

What Avengers/Marvel attraction are you most excited about coming to Disney Parks? Let us know in the comments below!

Let’s start planning your visit to Walt Disney World or Disneyland! Fill out the form below or send an email to Holly@MickeyTravels.com for a FREE, no-obligation quote.  As an agent with MickeyTravels (a Platinum Earmarked Agency), I will be on hand to help you with everything from finding your perfect package to nabbing those hard-to-get dining and FastPass reservations. I work with all Disney Destinations. Best of all, my services are absolutely FREE. Get in touch via email at Holly@MickeyTravels.com or calling 954.401.9577. Also, make sure to CLICK HERE to follow along with my Facebook page for all things Disney and giveaways!