Do you spend lots of time at the pool during your vacation? If so, you and I are kindred spirits! I love luxuriating in the warm glow of the Florida sun while I listen to some music. At Walt Disney World, I generally spend several hours a trip hanging out at the pool. Over time, I’ve discovered a few of my favorite places to eat and drink during my swimming sessions. Here are the eight best pool bars at Walt Disney World.

One of the unwritten rules at Disney is that you get more when you pay more. This trend is reflected in the list of best pool bars. They get better as the resorts grow in tier. Still, a couple of Value Tier resorts have fantastic pool bars.

Disney’s Pop Century Resort has a 1970s section has colors that would seem right at home on The Brady Bunch, a reference that dates me but makes the point. Petals is the grooviest pool bar at Walt Disney World. Unlike the other places here, it doesn’t serve food, though. All you’ll find are colorful drinks like the Lava Lamp, the Hulu Hoop, and the Lizard Byte. But it’s a great, underrated spot that’s rarely crowded except for the nearby Ping-Pong table.

Admittedly, this one is kind of a cheat. It’s not right by the bar, but it’s part of the recent expansion at Wilderness Lodge. It’s a few hundred feet away from the pool. You’ll want to walk here, though. This place has become one of the best hangouts at Walt Disney World. The lake view and rustic setting relax guests, while the hidden dropdown walls provide a safety throw against inclement weather. 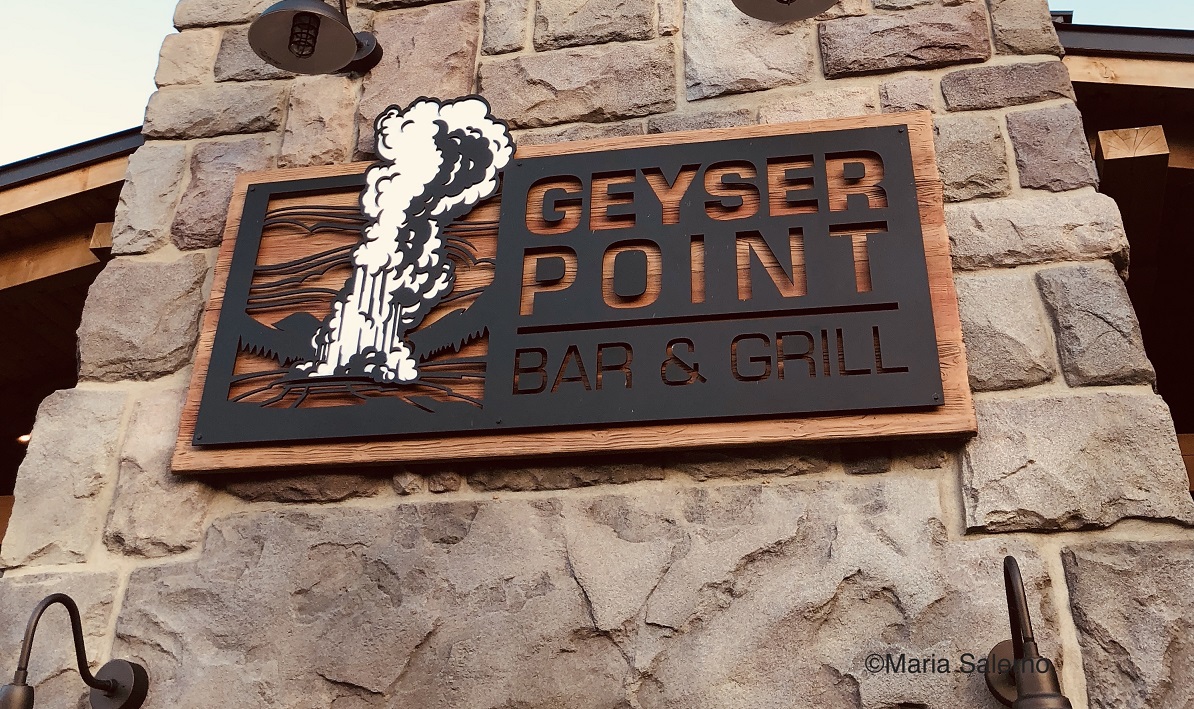 The cuisine here is shockingly advanced for a bar & grill. Does your local joint serve a bison burger? The answer is yes only for residents of the Pacific Northwest. Seriously, out of all the menus listed here, Geyser Point dominates the competition. The only reason why it’s not listed in first place is because it’s really not a pool bar, just one in the general vicinity of a pool.

God bless this hut and all who drink within the hut.

Uzima Springs is a crazy pool due to the sheer volume of kids who play here. Seriously, you’d be hard-pressed to name another spot at Disney that’s more congested during the afternoon. Children love this place, which explains why a pool bar is necessary. 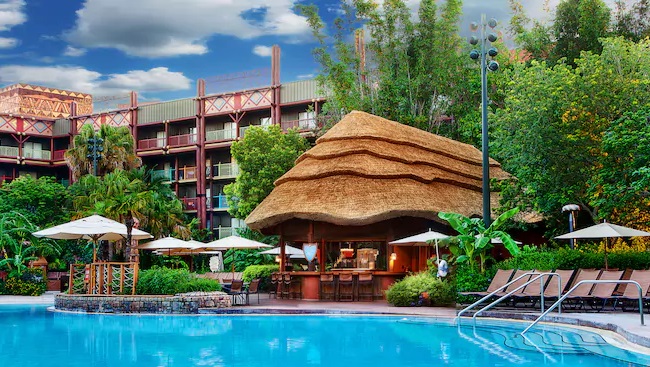 Parents are in luck, though. The African beer is exceptional, and the menu is somewhat ambitious. You can order a turkey and avocado club when you’re not in the mood for a burger or pizza. This place even serves smoothies for the more health-conscious among us.

5. The Drop Off Pool Bar – Disney’s Art of Animation Resort

The Drop Off is one of my favorite spots at Disney. There’s just something about it that seems sunnier. For whatever reason, I’ve had better luck with the weather here than anywhere else. Plus, the aquatic theme sets the mood well. 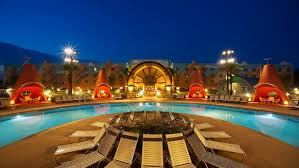 Technically, this place has food, although we’re talking packages of Lays potato chips rather than filling cuisine. You won’t care because of the drinks, though. The Big Blue Ocean is kind of a legend at Disney. It’s a combo of rum and vodka that finishes sweet and includes a souvenir glow cube. The Captain’s Pineapple also has a reputation as a kind of Dole Whip with a kick. I’d recommend the Frozen Jack and Coke, too, but I’m an Icee addict.

First of all, how could anyone not love this name? The theme of this resort is New Orleans, and the most recognized of all American parties is Mardi Gras. The cheeky name notwithstanding, I’d still vote for Mardi Grogs as one of the finest Disney pool bars. It has the perfect combination of food, drinks, and setting. 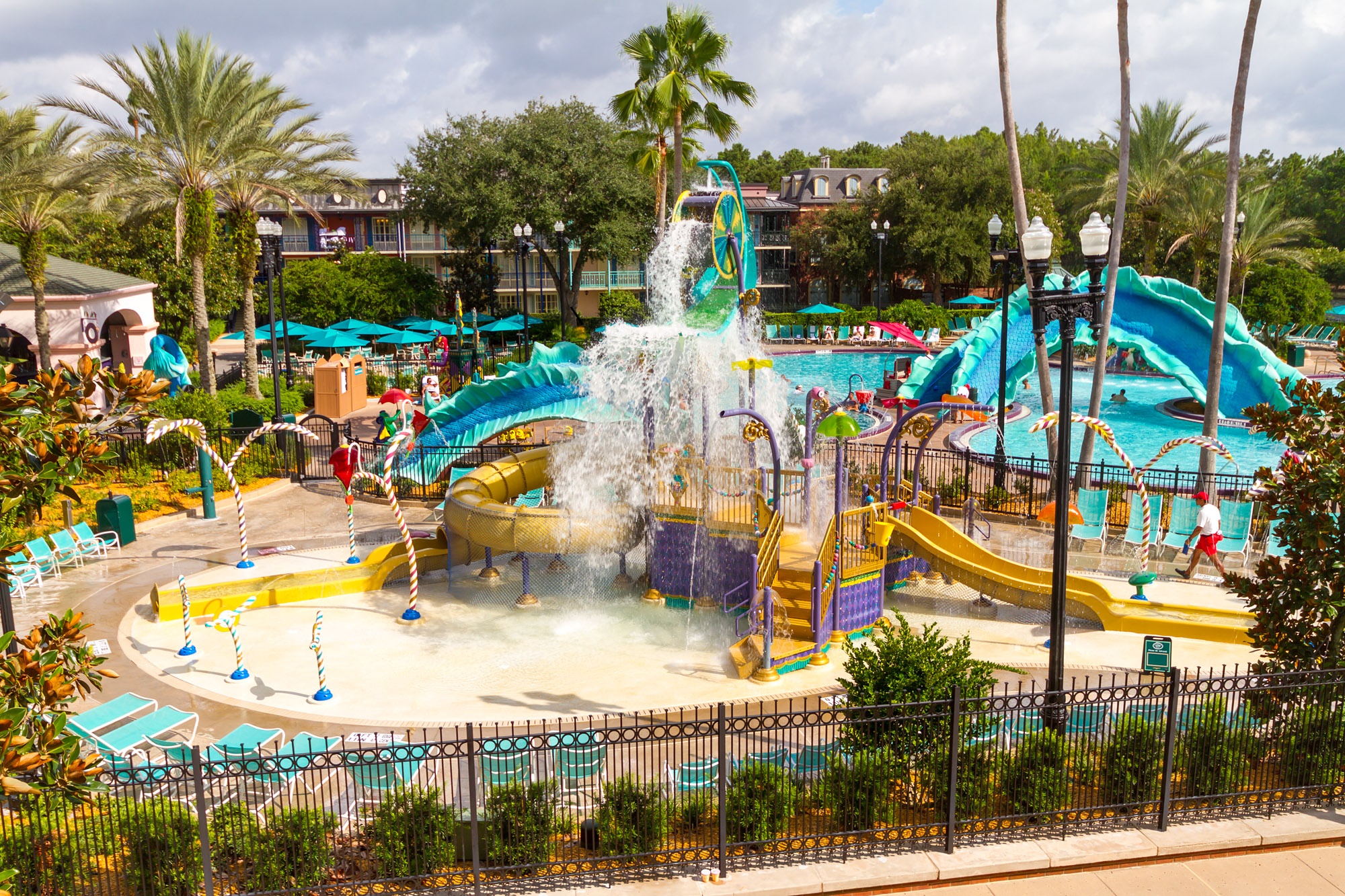 The backdrop is the Doubloon Lagoon, a pool with a sea serpent for a slide and King Neptune overseeing the festivities. When you sit at the pool bar, you can’t see any of it, which is why I recommend your choosing a table instead. Grab your food at Mardi Grogs and then sit somewhere that provides a line of sight to the bar and the pool. You want bar view for the two televisions here that show sporting events.

As for the drinks, this is New Orleans or at least a reasonable facsimile. It’s a whiskey joint with sandwiches on the side. 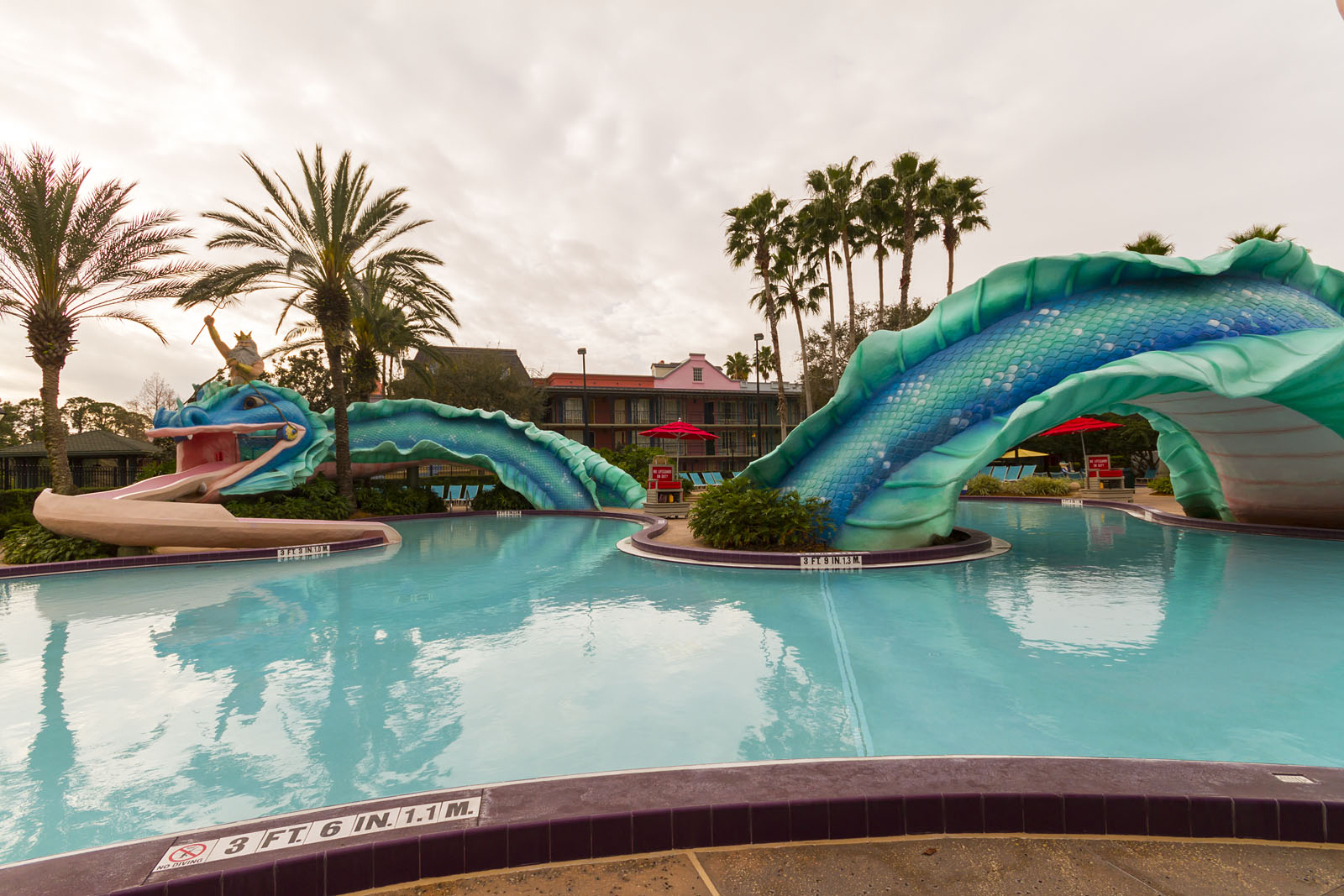 I love the sign here. I accept that this isn’t a huge deal to most people, but it sets the mood for me when I eat at Beaches. Admittedly, I don’t do this often.

The opportunity cost aspect of the Grand Floridian comes into play. Eating here means that you don’t eat at the Grand Floridian Café or 1900 Park Fare or…well, you get the point. When you want a quick bite as you play in the sun, however, this place is tough to beat. 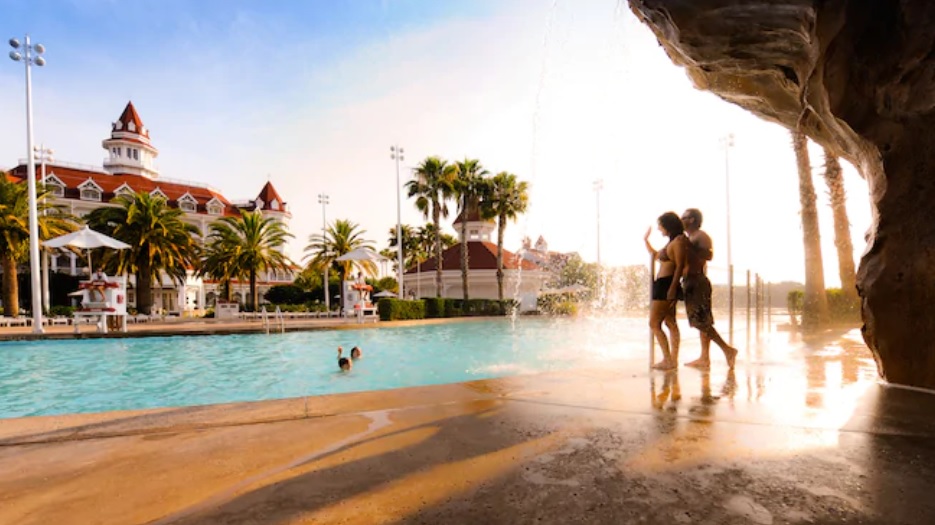 The menu here shares some ingredients with the other places I just mentioned, only it’s much cheaper. The Lobster Sliders and Grilled Portobello Sandwich are dishes that would thrill you on any date night in your hometown. The fact that they’re available only a few feet away from the zero-entry pool is an embarrassment of riches for guests staying at the Grand Floridian. Oh, and the wines here are perfect for sipping by the pool.

Since this resort is usually my home base during at least part of my Disney trips, I’ve spent a great deal of time here. What always shocks me about Oasis is the depth of the menu. For a place that’s only open a few hours a day, it’s got a stunning number of entrees.

Seriously, there are a few Table Service restaurants with fewer options. You can eat calamari, fish tacos, an avocado wrap, or sashimi here. Since four different Polynesian buildings surround the quiet pool, you can use Oasis as a perfect pick-up stop on your way in or out of the resort.

The drinks here will bring a smile to the face of any true fan of Polynesian. To the average Disney guest, the Pago Pago Painkiller is just rum with some fruit juices. Those of us who request this building know better. Similarly, the Lava Flow jokingly refers to the main pool here, the one nicknamed the Lava Pool. 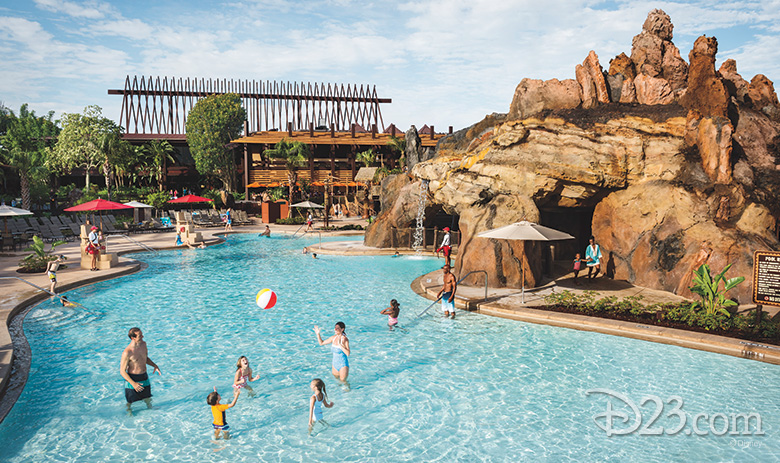 Of course, for guests who want a drink at the Polynesian, Trader Sam’s Grog Grotto is the place to go. The pool bar is plan B, but plan A is soooo much better. I use the Oasis for food and then head to the Great Ceremonial House for drinks. Seriously, I’m like 70 percent sure I could live at the Polynesian.

I love this place so much that as I talk about it, I wonder why I dine at Beaches and Cream so often. I’d be just as happy eating here. The burgers are nothing special, but the pulled pork sandwich is heavenly. And the turkey salad here is so strong that they added Hurricane Hanna’s to the name of it to define it as the entrée of choice. 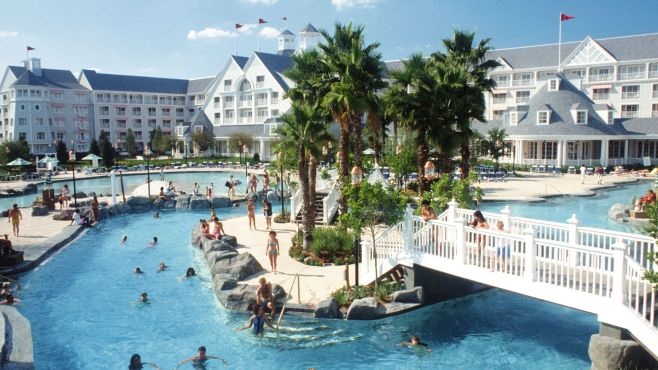 Since people spend more time at Stormalong Bay than most pools, this place has a broader menu of food and drinks plus a lot of snack options. You can even get a Mickey Mouse Ice Cream Bar. Out of the drinks, the Category 5 is the showstopper for me. It’s got some strong rum, enough to impress even hardcore pirates. The Storm Chaser is a bit sweeter but almost as strong.

What’s my favorite thing about Hurricane Hanna’s? It’s got nothing to do with the anything on the menu. This place has televisions that are visible from the pool. When I’m swimming or rafting along the lazy river, I can occasionally get a score from the game. It’s like a special gift from Beach Club to me. 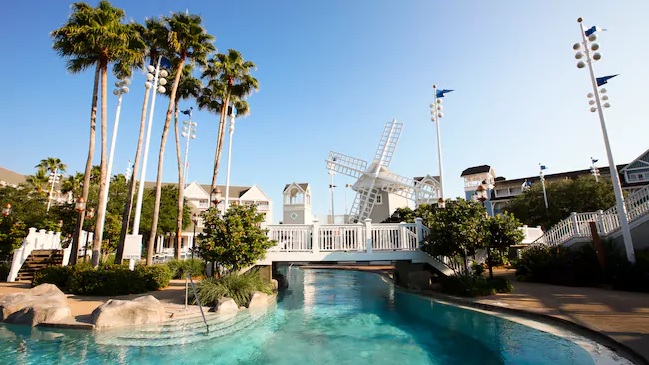