The Simon Wiesenthal Center gave this prestigious award to Iger in recognition of his longstanding support for the Center and its educational arm, the Museum of Tolerance. It was also in recognition for his ongoing commitment to cultural diversity, social responsibility and philanthropy. These commitments have helped guide him as a leader in the entertainment industry.

“Diversity has always been one of our nation’s greatest strengths, and that includes diversity of thought,” said Iger, as he accepted the award, acknowledging “respectful disagreement” as a vital part of a healthy democracy. “We have to redouble our efforts to promote tolerance and, more importantly, we have to do a better job at practicing it. We need to lead by example, so the generations that follow can see the power of tolerance in action and understand that it’s our saving grace and the hope of humanity.” 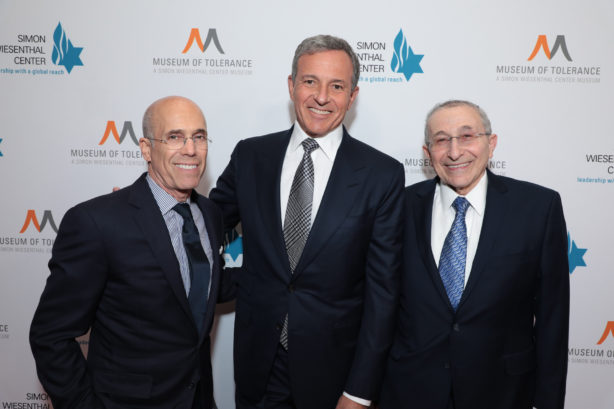 The Simon Wiesenthal Center is one of the largest international Jewish human rights organizations. It has more than 400,000 member families in the United States. The Center’s main focus is to research the Holocaust and hatred in a historic and contemporary context. It is also an accredited NGO at international agencies. This includes the United Nations, UNESCO, OSCE, and Organization of American States (OAS). It also includes the Council of Europe and the Latin American Parliament (Parlatino). The Center engages hundreds of thousands of children and adults annually at the Museum of Tolerance in Los Angeles. The Center designed the interactive exhibits, special events and customized programs to provide a deeper understanding of the Holocaust. It also examines all forms of prejudice and discrimination in our world today.

The Simon Wiesenthal Center honored Iger alongside Holocaust resistance hero Kurt Kleinman, Immigrant rights activist Florence Phillips and the courageous rabbi of Pittsburgh’s Tree of Life synagogue, Jeffrey Myers. Myers saved numerous lives during the terrorist attack on the synagogue in October 2018. He sheltered those around him and placing the safety of his congregation ahead of his own. The three received the Simon Wiesenthal Center Medals of Valor. This is an award that the organization bestows upon individuals who exemplify outstanding attributes of personal heroism.

Bob Iger encouraged a shared responsibility to promote inclusivity and renounce and reject hatred in all forms. He said, “We can take our cues from the fine work of the Simon Wiesenthal Center, which never wavers in its commitment to change the world for the better and meets ally and adversary alike with strength, resolve and integrity. We can also take inspiration from the heroes here tonight, whose lives and achievements prove that each one of us has the ability and the obligation to be part of the solution.”