Next month kicks off some great lineups on Freeform which includes saying goodbye to some and hello to others! Fans will enjoy seeing the Season Finale of “Good Trouble” and also the Season Premieres of “Marvel’s Coak & Dagger” and “The Bold Type”. Let’s take a look…

April 8 (8:00-9:01 p.m. EDT) – Episode #3017 – “Heavenly Fire”
Simon and Izzy team up on a secret mission to figure out what the Clave is hiding. Meanwhile, Clary is conflicted about Jonathan as the Shadowhunters try to get answers.

April 15 (8:00-9:01 p.m. EDT) – Episode #3018 – “The Beast Within”
A demon outbreak in New York City on Halloween becomes a top priority at the Institute, but as the Shadowhunters hunt the demons, Jace becomes more worried about Clary. Meanwhile, Alec has to juggle the outbreak with his deep concern about Magnus’ depression.

April 22 (8:00-9:01 p.m. EDT) – Episode #3019 – “Aku Cinta Kamu”
To try and save Clary from Jonathan, Jace goes undercover. Back at the Institute, Isabelle, Simon and Luke race to find a way to finally destroy Clary’s bond with Jonathan. With time running out, can Isabelle create the solution before Jace’s cover is blown?

April 29 (8:00-9:01 p.m. EDT) – Episode #3020 – “City of Glass”
Alec, Jace and Isabelle make a plan to finally get Clary back and stop Jonathan—much to Luke’s and Simon’s chagrin. Meanwhile, an emotionally raw Magnus struggles to deal with his father’s reappearance and Maia must make a tough decision that could affect the rest of her life. 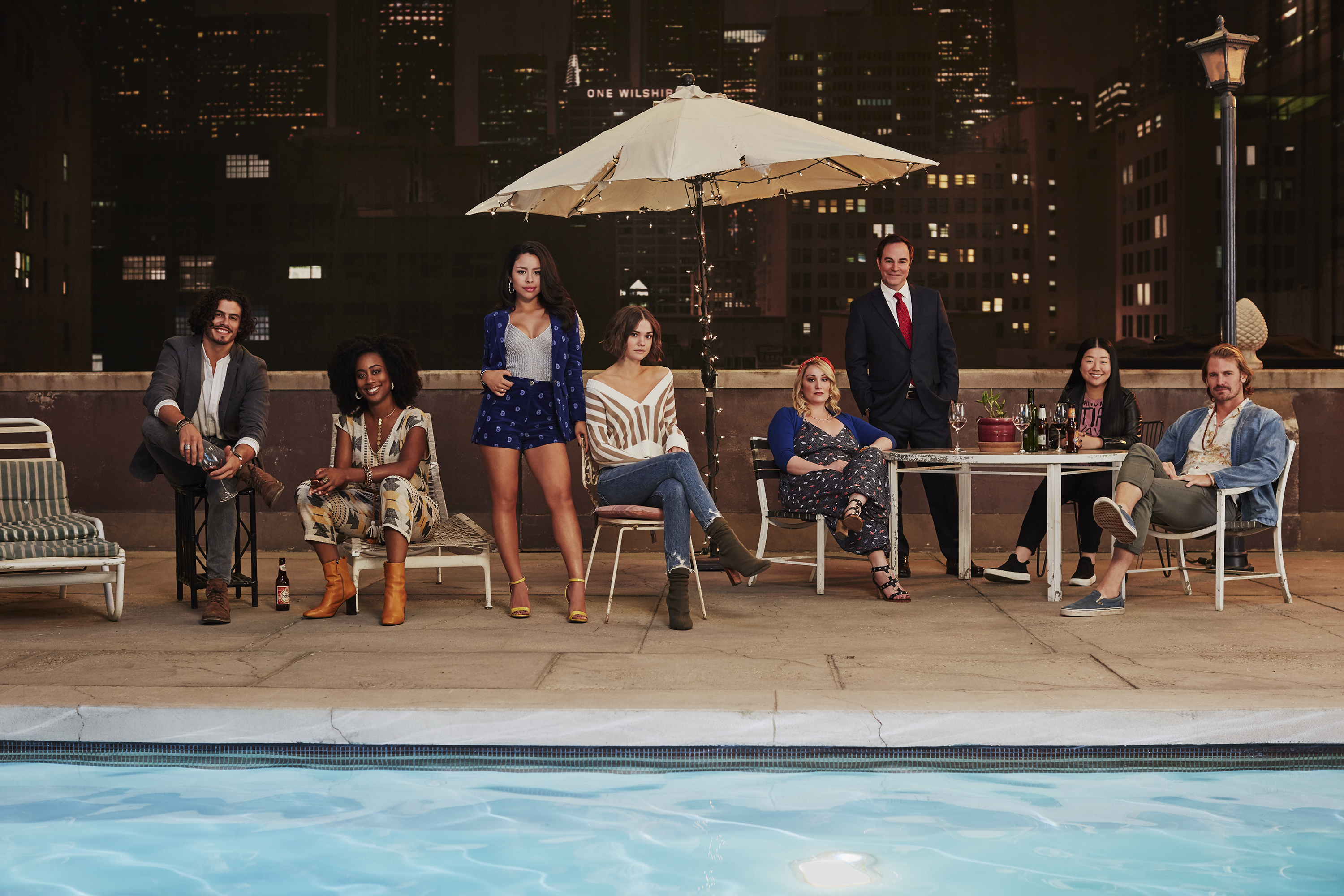 April 2 (8:00-9:00 P.M. EDT) – Episode #1013 – “Vitamin C”
Jamal’s trial begins, along with the Black Lives Matter protest Malika has organized, leaving Callie in a difficult position knowing she has information that could help Jamal’s lawyers. Mariana gets some new information about the salaries at Spekulate from an unlikely ally, forcing her to make a decision about whether or not to release the spreadsheet outlining the pay gap. Meanwhile, Sumi’s wedding day is here, and it’s time for Alice to face her emotions head-on. 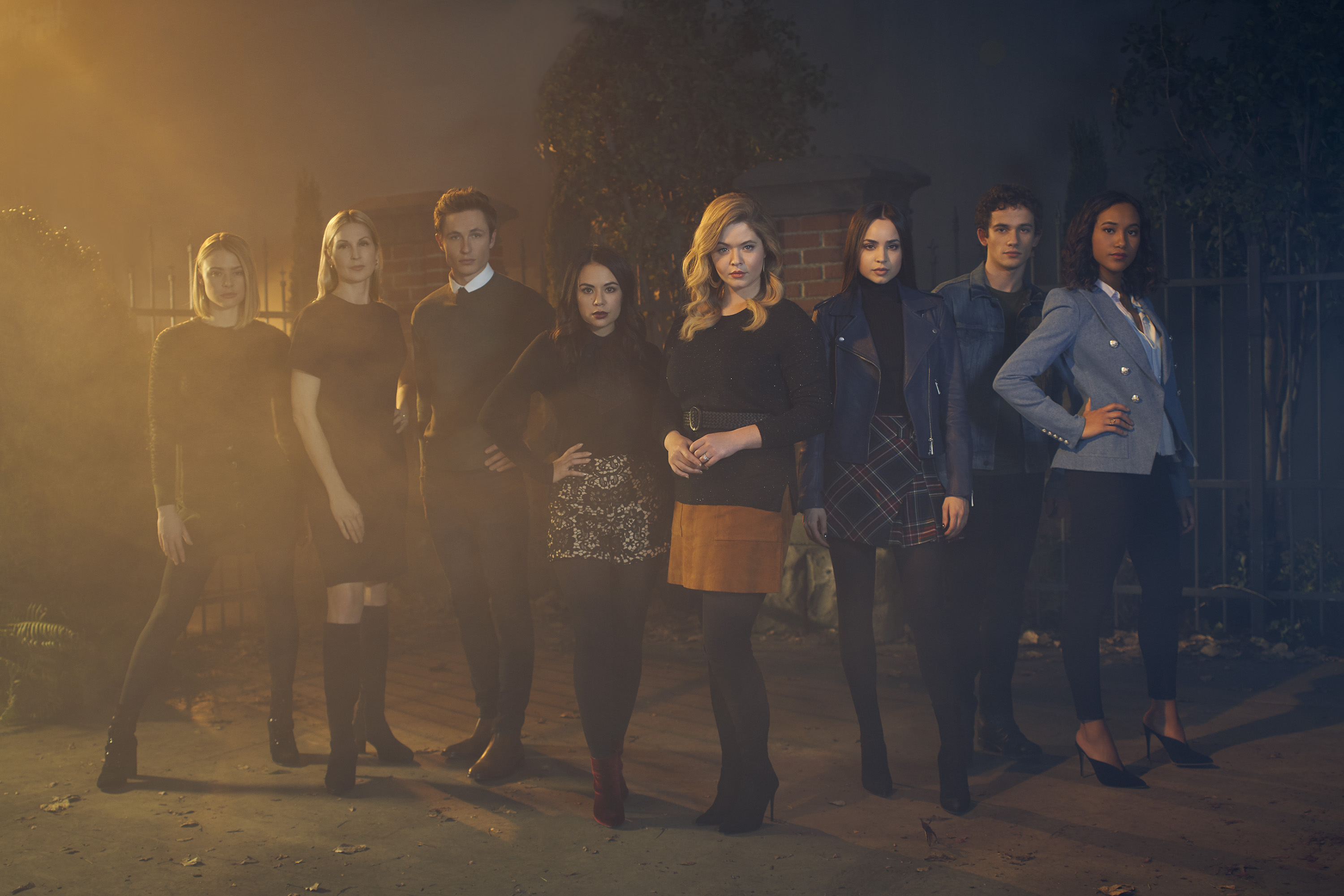 April 3 (8:00-9:01 P.M. EDT) – Episode #1003 – “…If One of Them is Dead”
The Perfectionists kick their investigating into high gear when they identify a possible suspect in Nolan’s murder. Alison begins to look into the circumstances surrounding the mysterious suicide of Taylor Hotchkiss. And seeing the Perfectionists juggle sleuthing with their intense academic demands, Alison decides to use her past in Rosewood as a way to mentor them through their current situation.

April 10 (8:00-9:01 P.M. EDT) – Episode #1004 – “The Ghost Sonata”
Alison hunts for Taylor, thinking she may be alive and in hiding. Caitlin, Ava and Dylan realize their newfound true friendship is threatened by still buried secrets and debate coming clean to each other. And the Perfectionists try to tighten a noose around their number one suspect.

April 17 (8:00-9:01 P.M. EDT) – Episode #1005 – “The Patchwork Girl”
Mona communicates with a mysterious stranger who promises insights into Nolan’s murder. Dylan struggles to concentrate on an important audition while being distracted by Dana Booker’s investigation. And the Perfectionists plan to clear their names ends in tragedy.

April 24 (8:00-9:01 P.M. EDT) – Episode #1006 – “Lost and Found”
When Alison brings Mona into her investigation of Taylor, Mona makes a surprising discovery. While preparing for the campus fashion show, Ava comes into contact with Zach, a fellow student with an unexpected connection to her past. And the Perfectionists struggle to recover from recent events. 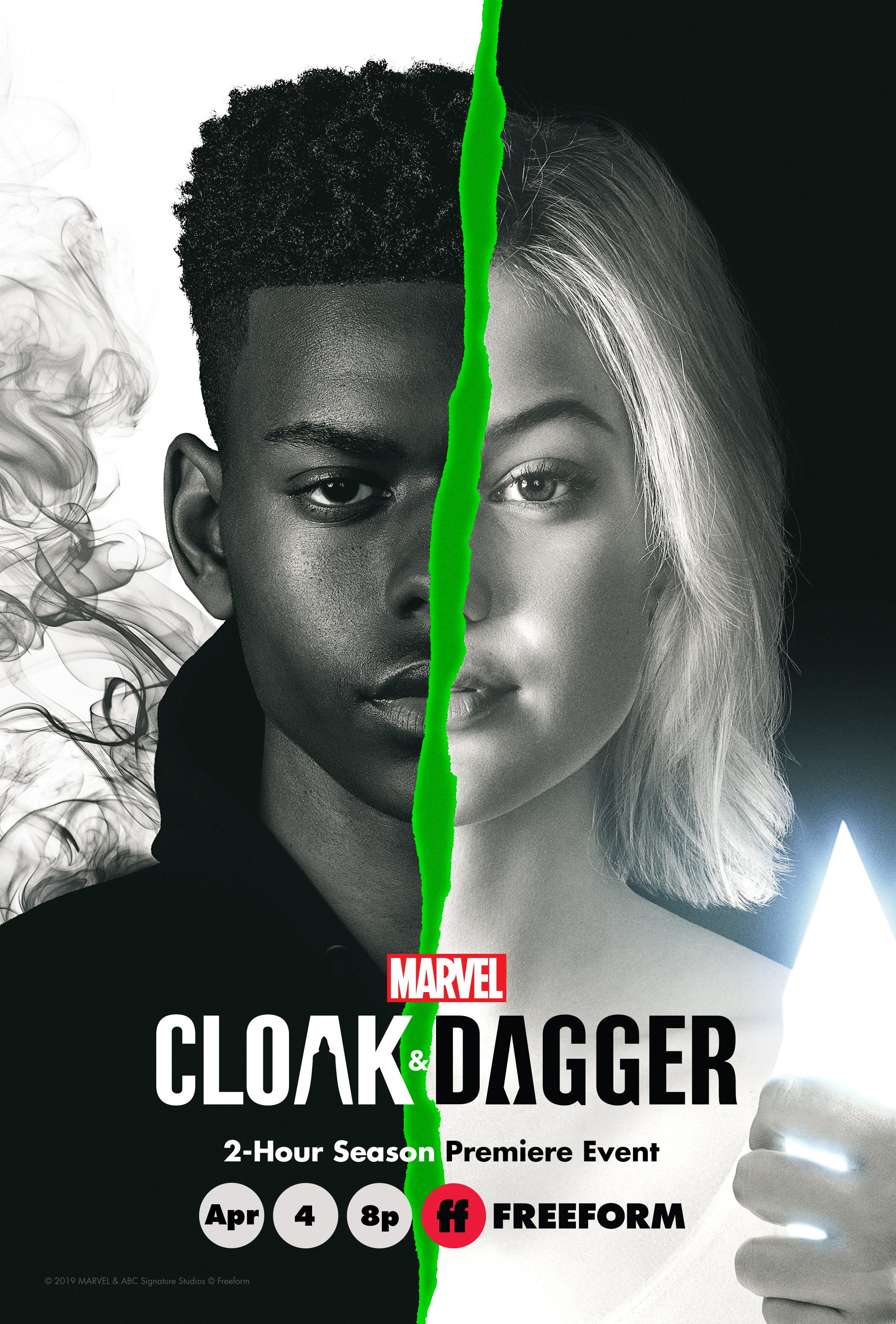 April 4 (8:00-9:01 p.m. EDT) – Episode #2001 – “Restless Energy”
Now living very different lives, Tyrone and Tandy try to stay under the wire while still honing their powers. After coming to terms with their destiny, the two now find it difficult to just stand by and do nothing while bad things continue to happen throughout the city. Meanwhile, Brigid is struggling with her recovery.

April 4 (9:01-10:02 p.m. EDT) – Episode #2002 – “White Lines”
Desperate to help, but only finding they cause more problems than solving them, Tyrone and Tandy continue to struggle with their situation. What is the point of having superpowers if you only seem to make things worse?

April 11 (8:00-9:01 p.m. EDT) – Episode #2003 – “Shadow Selves”
After learning about a group of young girls who have gone missing, Tandy and Tyrone look to see if they can find out what has happened to them. As they get further into their investigation, they realize someone else is trying to rescue the girls too, but in her own vigilante justice type of way. Meanwhile, Mina may have discovered a side effect to the big Roxxon leak.

April 18 (8:00-9:01 p.m. EDT) – Episode #2004 – “Rabbit Hold”
Still on her quest to find out more about the sex trafficking ring, Tandy takes a dangerous trip to find Mayhem, who may have the answers she is looking for. Meanwhile, Tyrone’s past actions catch up to him and put Adina in harm’s way.

April 25 (8:00-9:01 p.m. EDT) – Episode #2005 – “Alignment Chart”
Tyrone is faced with a hard decision when presented with an opportunity to clear his name from an unlikely source. Meanwhile, Tandy is letting her anger get the best of her as she becomes frustrated with a possible dead end to her investigation into the sex trafficking ring. 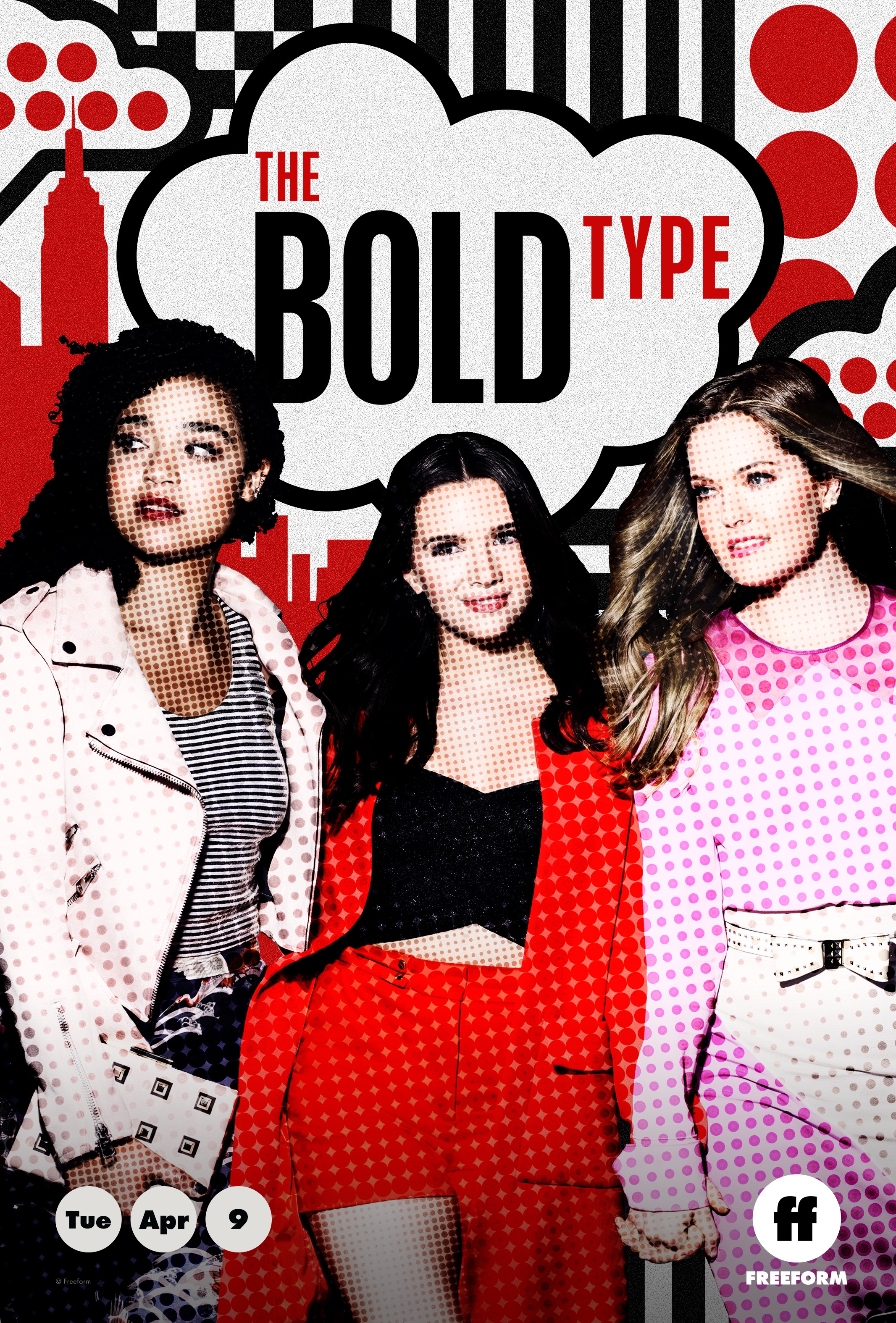 April 9 (8:00-9:01 P.M. EDT) – Episode #3001 – “The New Normal”
Picking up right after the heartbreak, romances and uncertainties from the season two finale in Paris, Jane, Kat and Sutton are back in New York City and dealing with the aftermath of some major decisions. Scarlet Magazine brings in Patrick Duchand to run the digital branch, effectively knocking Jacqueline down to only running the print magazine. Meanwhile, Jane has picked her guy but is frustrated that a man is put in charge of a women’s magazine. Kat struggles to keep up happy appearances on social media and as a speaker at the Scarlet Summit while secretly suffering heartache. Sutton and Richard enjoy their romance in the limelight and discuss moving in together.

April 16 (8:00-9:01 P.M. EDT) – Episode #3002 – “Plus It Up”
Jane begins her fertility treatments in preparation for freezing her eggs and is assigned an article to write about her experience, but with a very personal twist. Kat learns that a prominent lesbian bar is being closed down and replaced with condos and decides to throw a Queer Prom to fundraise its rescue. Sutton moves in with Richard but struggles to accept his help when Oliver’s mysterious absences force her to put in more hours at work.

April 23 (8:00-9:01 P.M. EDT) – Episode #3003 – “Stroke of Genius”
With Jane’s egg extraction on the horizon, she and her boyfriend can’t wait to have sex again and she challenges herself to be less “vanilla” and more “rocky road” in the bedroom. Alex examines his dating life in a piece for Scarlet digital when he realizes he was the subject behind a #MeToo story. Fed up after realizing that her councilman doesn’t have his city’s best interests at heart, Kat decides to channel her passion by volunteering for his opposition. Sutton considers a career shift into fashion design but debates how to break the news to Oliver.

April 30 (8:00-9:01 P.M. EDT) – Episode #3004 – “The Deep End”
Jane stumbles on the scoop of a lifetime, but Jacqueline turns down the pitch when her impending 10th-anniversary gala and continued power-struggles with Patrick force her to contemplate her future with Scarlet. Sutton preps a design seminar application for Oliver’s recommendation, but he remains distracted by things in his personal life. Kat decides to run for City Council but reconsiders when she learns what the opposition might spin about her past.

Which one are you most excited to see?