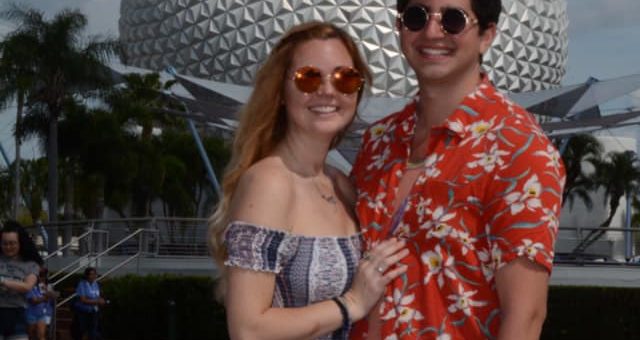 As I was scrolling through one of my several Disney-themed Facebook Groups this past Friday, I came upon an interesting post. A young lady was visiting Epcot with her boyfriend, enjoying the Flower & Garden Festival when they were separated. So, in 2019, you might be thinking, just give him a call on his cell phone and meet up. Well, unfortunately, his cell phone had died so there was no contacting him that way. Thinking she was out of luck, Brittany Blake, had an idea. Why not post to the Annual Passholders – Walt Disney World Resort Facebook Group and put to use the largest social media network on the planet!

Weird post but lost my boyfriend in Epcot today and haven’t been able to find him for hours because his phone is dead. If anyone sees him can they tell him to meet us at the Mexican pavilion?
PS- I’m the one who’s nervous here because I hate being alone lmao. He’s prob off drinking ?? 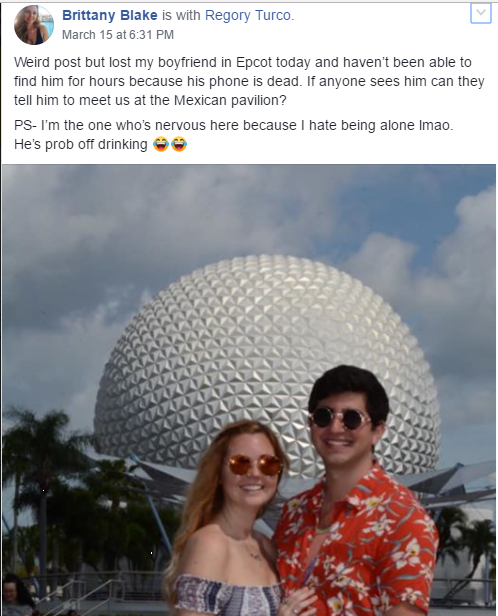 That’s when the fun started! Being a tight-knit group of Disney Annual Passholders, they all got together to help Blake find her long, lost boyfriend, Regory Turco. A total of 1.5 thousand comments were made on Blake’s most with most being helpful and some getting a good laugh in. Members suggested places to look for him including the gift shops, napping on Spaceship Earth, counting pastries at Joeffrey’s, and heading to the Magic Kingdom on the Monorail.

I am happy to report that after the extensive search the story of the story lost boyfriend in Epcot turns ends “Magically Ever After”, Blake found Turco! He was waiting in line for the Frozen ride! Blake once again posted in the Facebook Group:

Update on my boyfriend: Found on the frozen ride. He was drinking all day while looking for me ???? Btw: thanks for everyone’s nice comments!! ?

I am so glad this story of the lost boyfriend in Epcot has a happy ending for all in involved! Next time, Turco needs to invest in a Fuel Rod so his phone won’t ever die though!

Let’s start planning your Walt Disney World vacation! Fill out the form below or send an email to Holly@MickeyTravels.com for a FREE, no-obligation quote. As an agent with MickeyTravels (a Platinum Earmarked Agency), I will be on hand to help you with everything from finding your perfect package to nabbing those hard-to-get dining and FastPass reservations. I work with all Disney Destinations. Best of all, my services are absolutely FREE. Get in touch via email at Holly@MickeyTravels.com or calling 954.401.9577. Also, make sure to CLICK HERE to follow along with my Facebook page for all things Disney and giveaways!