It’s time to “get’cha, get’cha head in the game”! The highly anticipated, innovative and re-invented “High School Musical: The Musical: The Series”  is now officially in production in Salt Lake City, Utah. The 10-episode series picks up nearly 15 years after the original movie aired at the real-life location where it all began: East High. It follows a group of students as they countdown to the opening night of their school’s first-ever production of “High School Musical.”

Showmances blossom; friendships are tested while new ones are made; rivalries flare and lives are changed forever as these young people discover the transformative power that only a high school drama club can provide. Brand-new songs and acoustic “rehearsal room” reinterpretations of songs from the original “High School Musical” provide the soundtrack for an unlikely group of theater kids who learn “we’re all in this together” when it comes to pulling off an against-all-odds opening night.

“The challenge we handed the creative team was Herculean. How do you recapture the joy and the magic of the original ‘High School Musical’ movie … and simultaneously reimagine it completely?” said Gary Marsh, president and chief creative officer, Disney Channels Worldwide. “That’s like trying to solve a Rubik’s Cube blindfolded. And Tim and Oliver—and this amazingly talented and diverse cast and crew—have done exactly that!”

“We are truly excited about this extremely talented cast and the fresh and contemporary take on this globally-beloved franchise,” said Agnes Chu, senior vice president of content, Disney+. “From the music and dance to the characters and hilarious meta references, there is something here for fans of the originals, as well as people who are new to East High. It’s going to be an unforgettable viewing experience for Disney+ subscribers.” 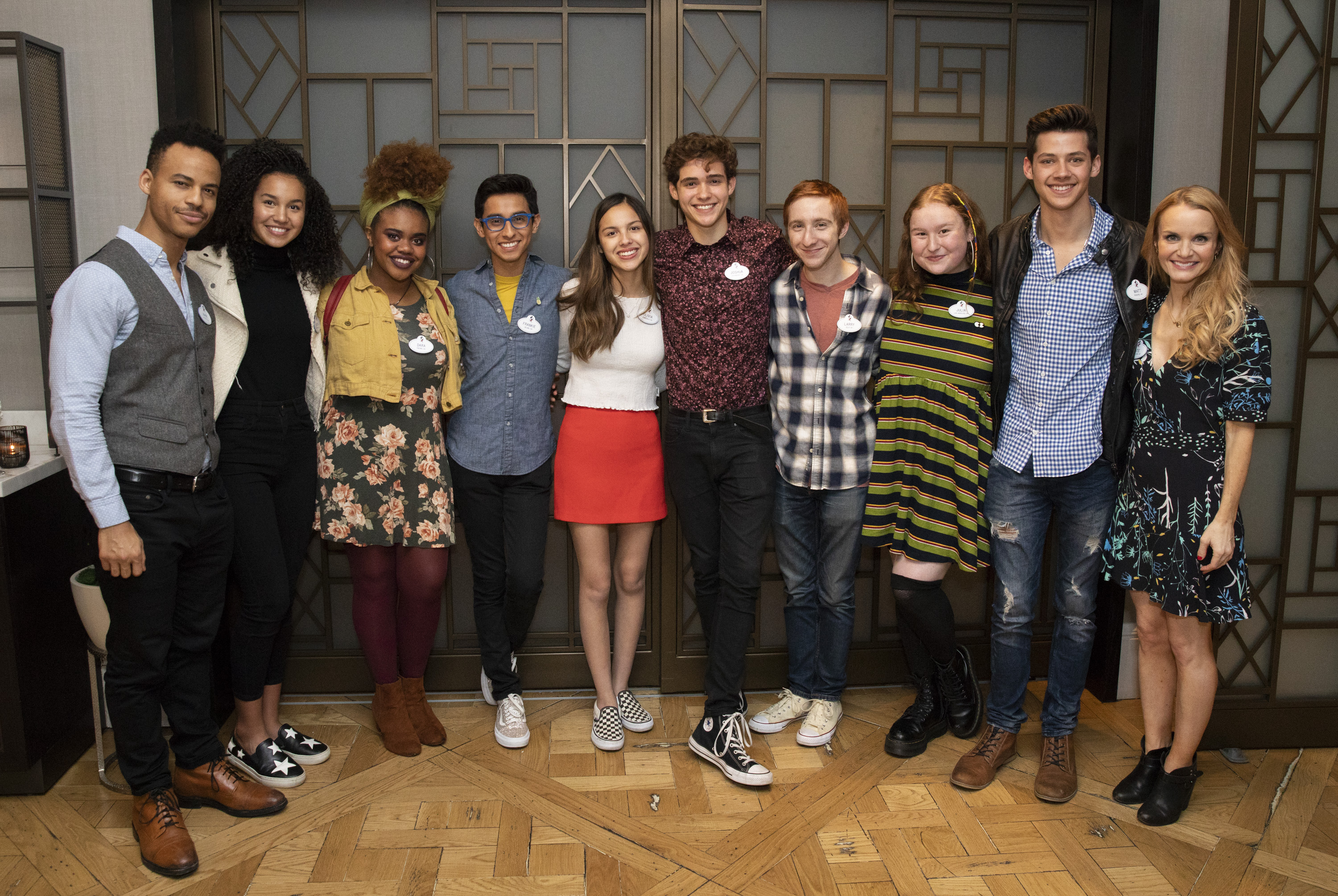 Basset is an 18-year-old actor and songwriter from Oceanside, California and had a recurring role on Disney Channel’s “Stuck in the Middle.” He recently guest starred on “Dirty John” and can currently be seen in a recurring role on ABC’s “Grey’s Anatomy.” Bassett plays Ricky, a sarcastic yet charismatic skate rat and high school junior. He launches a bold plan to prove himself to his ex-girlfriend Nini. He auditions to star opposite her in the school’s first-ever production of “High School Musical: the Musical.”

Born and raised in Temecula, California, Rodrigo has been singing, playing music and acting since she was age six. She also just starred in Disney Channel’s “Bizaardvark”. In “High School Musical: The Musical,” Rodrigo plays Nini, just returned from summer theater camp. It was during camp that she found her voice, her confidence, and her new boyfriend. Fiercely loyal to her two moms, Nini is a star. If only she can just believe in herself long enough to stay put in the spotlight.

A stage, film and television actress, Reinders was a series regular on ABC’s “Work It” and Lifetime’s “Sherri”. She guest starred on ABC’s “Modern Family” and “Ugly Betty.” Her theatre roles include Broadway productions of “Meteor Shower,” “Something Rotten!,” “Wicked,” Sam Mendes’ revival of “Gypsy” and “Beautiful, the Carole King Musical”. Her “High School Musical: The Musical” character, Miss Jenn, is the school’s new high-energy, low-reality drama teacher, who believes musicals can save lives. She may suffer from serious imposter syndrome, but she would do anything for her students, even if it means fudging a few credits on her C.V.

Born and raised in Scottsdale, Arizona, Wylie has a starring role in Disney Channel’s critically acclaimed series “Andi Mack,” and most recently made her musical debut with “Side by Side,” part of the “Marvel Rising: Chasing Ghosts” special. She is recording her debut single, which should be out in late 2019. Wylie is also the voice of Riri Williams in the “Marvel Rising: Heart of Iron” animation series and just made her big screen debut with a leading title in Marvista’s “Back of the Net.” Her character, Gina, is a recent transfer student and a diehard theater kid with as many skeletons in the closet as she has credits on her résumé. She is both ambitious and entitled, and dead set on showing Miss Jenn that she made a huge mistake in casting her as the understudy.

Born in Rogers, Arkansas, Cornett had a recurring role on “Bella and The Bulldogs” and guest starred on ABC’s “The Middle,” “Southland” and “Criminal Minds,” among others. He will play E.J., Nini’s new love interest and the supremely confident son of two corporate lawyers, who secretly battle the pressures of living up to his picture-perfect Instagram account. Co-captain of the water polo team, senior class treasurer, and trust fund baby … it’s not a good idea to cross E.J. if you get something he wants—like the lead in the musical.

Los Angeles-born and Baltimore-raised, Reneé has entertainment in her genes. Since the age of 11, Reneé has studied at her and her mom’s performing arts studio, “Encouraging Youth to Dream”. She recently starred as Savannah in Disney Channel’s Original Movie “Freaky Friday.” She also has guest starred on ABC’s “The Kids Are Alright”. Recently she has landed the recurring role of Stunts on the hit ABC show “black-ish.” Reneé plays the role of Kourtney, Nini’s ride-or-die best friend who’s obsessed with makeup tutorials and feminism in equal measure. Kourtney works on the costume crew of “High School Musical,” pulling together runway-ready fashion on a high school budget.

Los Angeles native Julia Lester has been working professionally since the age of five. Some of her television credits include recurring roles on the comedies “Mom,” “Prince of Peoria” and “Mr. Student Body President”. She has performed in dozens of local and regional musical productions including “Carrie: The Musical” and “Next to Normal”. Lester plays E.J.’s cousin Ashlyn, an “old soul” who worships Sara Bareilles and is an aspiring songwriter on the sly.

Rodriguez has worked in television and film for the last four years and can be seen in the guest-starring role of Eduardo on ABC’s “Modern Family”. In “High School Musical: The Musical,” Rodriguez plays Carlos, captain of the color guard and the student choreographer for the show. Carlos thinks of Miss Jenn as a peer. He eats lunch in her office, has been drinking espresso since the 3rd grade and already has his Tony Awards® speech memorized.

Born and raised in Long Island, New York, Saperstein acted opposite Kiernan Shipka in the film “Fan Girl”. He will also guest star in an upcoming episode of BET’s “The First Wives Club”. A skater boy through and through, Big Red is the spiritual cousin of both Bill and Ted. He’s always fuzzy and he’s been sleep-deprived since preschool. Big Red is weirdly devastated by Ricky and Nini’s breakup. His surest role is as their wisecracking third wheel.

A Louisiana native and an alumna of the ABC Diversity Showcase, St. Cyr’s credits include the film “Marshall,” opposite Chadwick Boseman and Jussie Smollett, and the critically acclaimed “Doomsday”. He also guest starred on “Chicago P.D.” and “After After Party”. In “High School Musical: The Musical,” St. Cyr plays Mr. Mazzara, East High’s somewhat robotic S.T.E.M. teacher. His belief in preparing students for the future often leads him to butt heads with Miss Jenn, who would rather sing about life than live in the real world.