The Amazing Stories Of The 2019 Walt Disney World Marathon Weekend

The 26th annual Walt Disney World Marathon Weekend kicks off in just a few days and there are so many exciting things to talk about. Presented by Cigna this event ranks among the nation’s most popular destination races, growing from 8,200 runners in 1994 to more than 100,000 athletes and spectators expected this year. Among them are thousands of runners participating on behalf of a cause, as a triumph over adversity, or simply as a celebration.

After Ron Wertley of Tampa, Fla., participated in the 48.6-mile Dopey Challenge in the 2018 Walt Disney World Marathon Weekend, a trip to the doctor revealed he had acute lymphoblastic leukemia (A.L.L.), a very aggressive form of cancer. The doctors gave him a 40% chance of survival. He began an extremely grueling and aggressive chemotherapy regimen shortly afterwards. After months of fighting the illness and many rounds of chemo, Wertley went into remission in July and he was cleared to run the Dopey Challenge again this week, despite having to continue monthly preventative chemo treatments. Unfortunately, in late December, the cancer returned. Wertley is determined to still do the Dopey before starting the aggressive chemo treatments again. They will begin with a 30-day hospital stay after the races this week.

Deb Armstrong of Colorado used to run races on behalf of Leukemia & Lymphoma Society (LLS) to raise money for cancer patients. But now the tables have turned. It’s now Armstrong who finds herself needing support after being diagnosed with cancer in late 2017. After spending all of 2018 undergoing chemo, the same people she ran with to help cancer patients have now banded together to help her, pooling their personal money together to send Armstrong back to the Walt Disney World Marathon because she couldn’t afford it on her own because of her medical bills.

Eric Donahoe of Indianapolis, Ind. has experienced many challenges throughout his military career and at home in his personal life. In 2006, his wife and fellow veteran miscarried at seven months pregnant. This is while he was deployed as a scout sniper in Iraq. In 2009, after returning to Iraq, he was hit by a roadside bomb and sustained head and neck injuries. The doctors then diagnosed Donahoe with traumatic brain issues.

The military medically retired Donahoe in 2009, but he struggled to adjust to life back at home. His wife miscarried several more times. The doctors then also diagnosed her with cancer. He also lost two friends from his military service to suicide. He began to have dark thoughts of his own, but reached out to veterans programs and sought out counseling. Donahoe ultimately got into running as a means to cope with life’s challenges. He is participating in the Walt Disney World 5K to continue his journey towards good health. 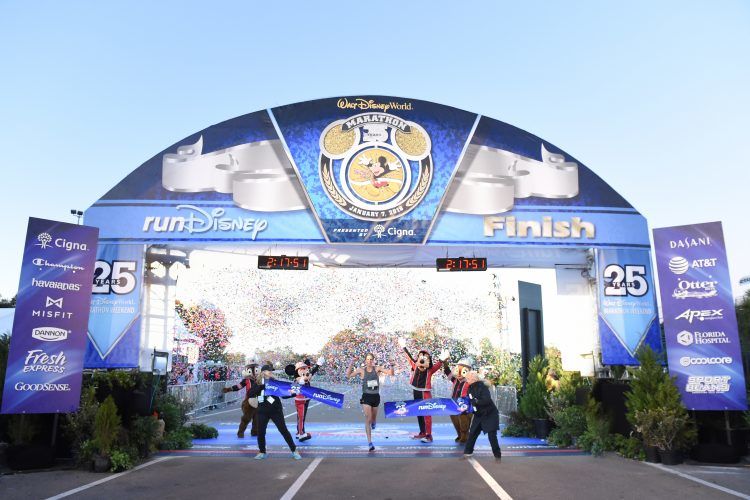 Arlen Martinez’ son was born with serious medical issues, having been diagnosed with Amniotic band syndrome. He was born without a left thumb or radial bone, a clubbed left hand and a cleft palette. The doctors diagnosed Martinez with cancer shortly after her son’s birth. The Miami, Fla. mother underwent a spinal cord surgery as part of her treatment. The doctors told her that she may never walk again. Martinez defied her diagnosis, and is participating in the Walt Disney World 5K as a triumph over her own medical challenges, as well as her son’s.

Motivated by the deaths of her family members, Winston Salem woman embarks on crusade to save the lives of her fellow church members

When she was 7-years-old, Ja’Net Adams of Winston Salem, N.C., lost her father to a heart attack. She also lost her aunt and uncle to heart disease. As an adult, Adams has launched a program at her church to help her fellow church members avoid the same fate. The program focuses on better eating habits, increased exercise and weight loss. To date, she has significantly helped several church members avoid heart disease and, perhaps, saved their lives. Adams is running in the Walt Disney World 5K to raise awareness for the prevention of heart disease and other ailments.

St. Louis teen participating in Walt Disney World 5K after asthma nearly plunged him into a life of inactivity, bullying and low self-esteem

Jeremiah Boothe of St. Louis, Mo. was born with severe asthma and had been unable to do any sort of physical activity. He struggled to even walk up one flight of steps, leading to him being ostracized and teased at school. But through a new asthma management program, he is now able to do physical activity. Boothe is even on the football team! He is running in the Walt Disney World 5K – his first-ever 5K race – as a triumph over his asthma.