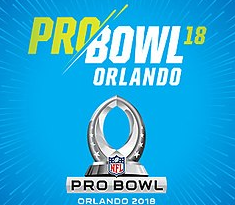 The NFL announced that the Pro Bowl presented by Verizon is returning to Orlando for the third straight year, which means the Pro Bowl Week activities will primarily be held at ESPN Wide World of Sports Complex again.

The sports complex at Walt Disney World Resort will once again be football headquarters during the NFL’s All-Star game week, serving at the host site for AFC and NFC team practices, the Pro Bowl Skills Showdown, the NFL Flag Championships powered by USA Football and more.

The Pro Bowl practices will involve 88 of the NFL’s All-Stars – 44 from the AFC and 44 from the NFC – as determined by a consensus of votes by fans, players and coaches. Both teams will once again be led by offensive and defensive NFL Legends who will serve as captains representing each conference.

One of NFL Pro Bowl Week’s most interesting and most anticipated events is the Pro Bowl Skills Showdown – a series of unique competitions where AFC All-Stars and their NFC counterparts compete against each other. Key Pro Bowl Skills Showdown competitions include Dodge Ball, Kick, Tac Toe, best hands challenge, precision passing and the drone drop – a bonus event where one player from each team will attempt to catch footballs dropped from drones from increasing heights above the field. The player who records the highest catch total wins money for the charity of his choice.

Another popular event during NFL Pro Bowl Week is the NFL Flag Championships powered by USA Football. For the second straight year, sixty-four teams – eight regional champions in four divisions plus 32 at-large teams – will compete in the tournament. NFL Pro Bowl Legends will serve as guest coaches, encouraging the teams as they compete for the national championship.