The Best Star Wars Books for Every Age

A long time ago in a galaxy far, far away…a Princess named Leia became one of the first strong and fearless female characters I knew. I can remember staring at my family’s’ living room TV through my adolescent eyes, cheering loudly every time she held a gun to a bad guy. And even louder when her unapologetic tongue put Han in his rightful place. And I couldn’t get enough.

Now as an adult, I’ve seen every Star Wars film so many times that I can practically quote the original 6 films from opening crawl to end credits! I still watch the films regularly, but my interest in the incredible world George Lucas created became so intense that I wanted- no, I needed- other ways to enter that far-off galaxy…so I turned to a medium that has never steered my wrong- books! So parents of toddlers, teens, and adult readers alike, listen up: these are the best Star Wars books for every age group! 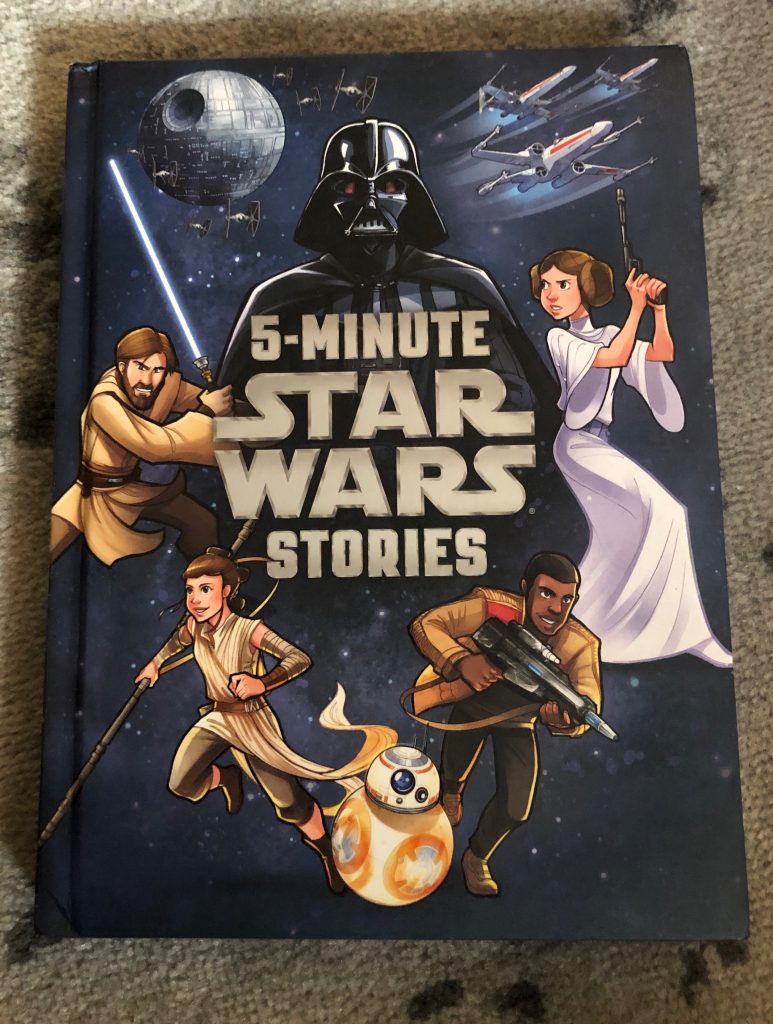 I’m so grateful that my parents took the time to read to me when I was a baby. Unlike most of my friends though, my Star Wars fandom was not passed down to me from my parents, I had to arrive at it all on my own. 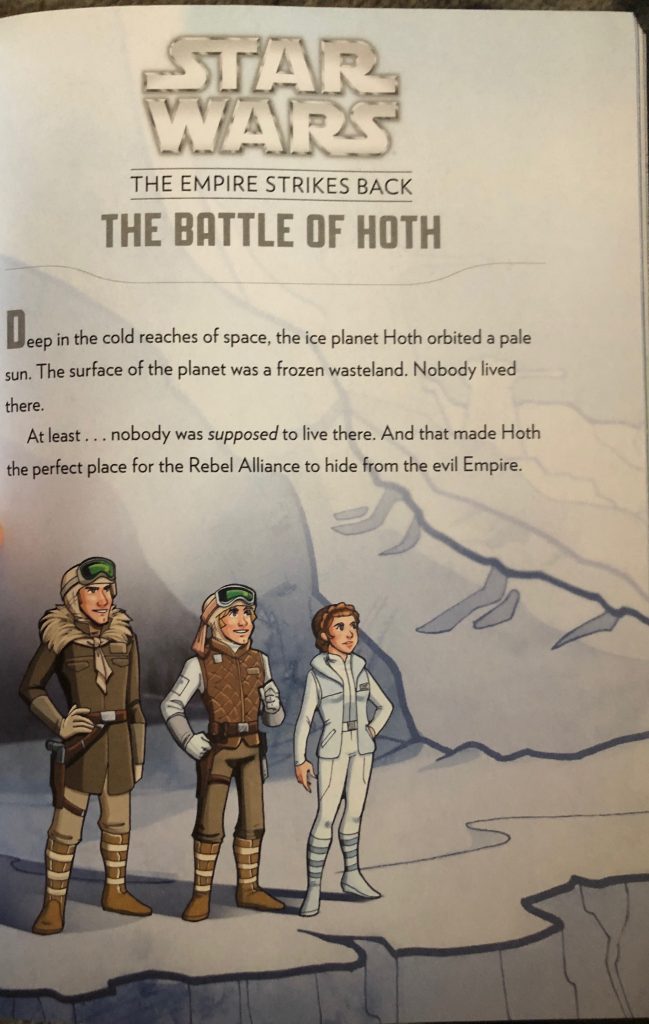 If my parents were fans of the saga though, I KNOW this would have been a go-to bedtime staple! With vibrant illustrations and streamlined stories, this hard cover book will supply many, many story times with epic space battles and memorable characters.

From New York Times bestselling author Tony Diterlizzi and illustrations by Academy Award winner Ralph McQuarrie, this one is about as timeless as they get. The illustrations cover each and every page so that the text had to be literally fitted around them. That makes this book a great one for reading aloud sitting next to your youngster- they won’t want to miss one single illustration…and neither will you! 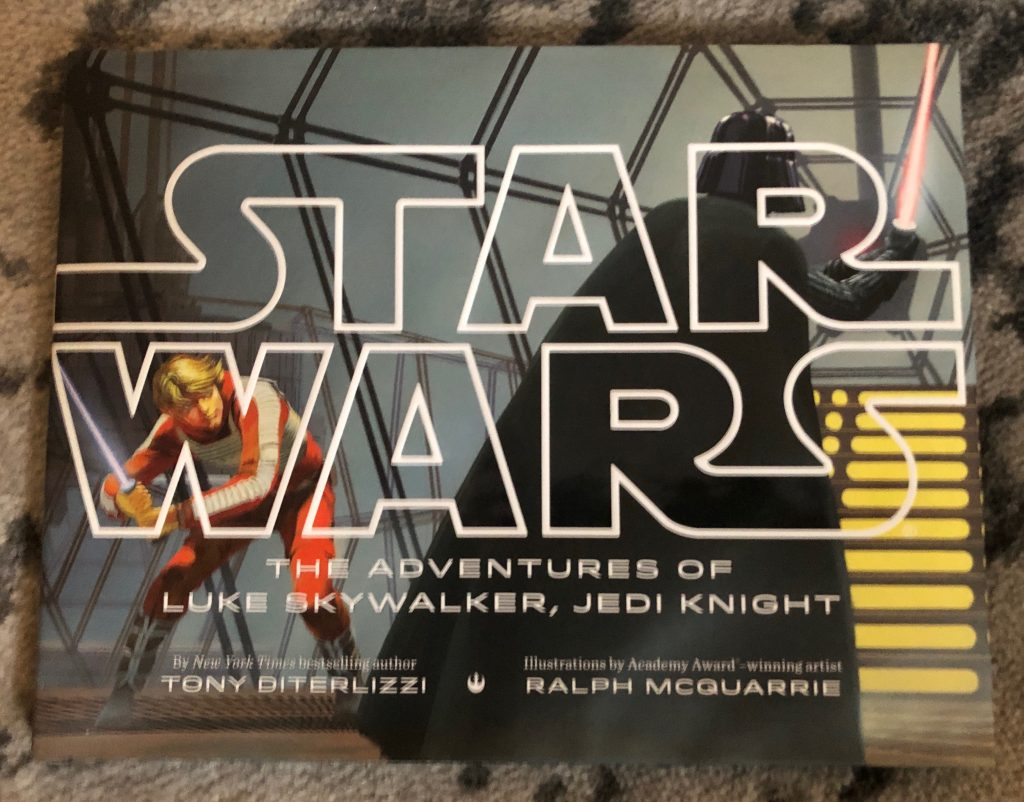 “Star Wars Revenge of the Sith”

It’s true that the book is always better than the film, but what about what about the cases when the film came first? Based on the story in the third film, Star Wars Revenge of the Sith (by Matthew Stover) is a great example of a book surpassing a film! Those prequel trilogy films have some really cool action sequences going for them, but the bad CGI (sorry George but it’s true) and the mediocre acting are a huge turn off now that I’m grown. 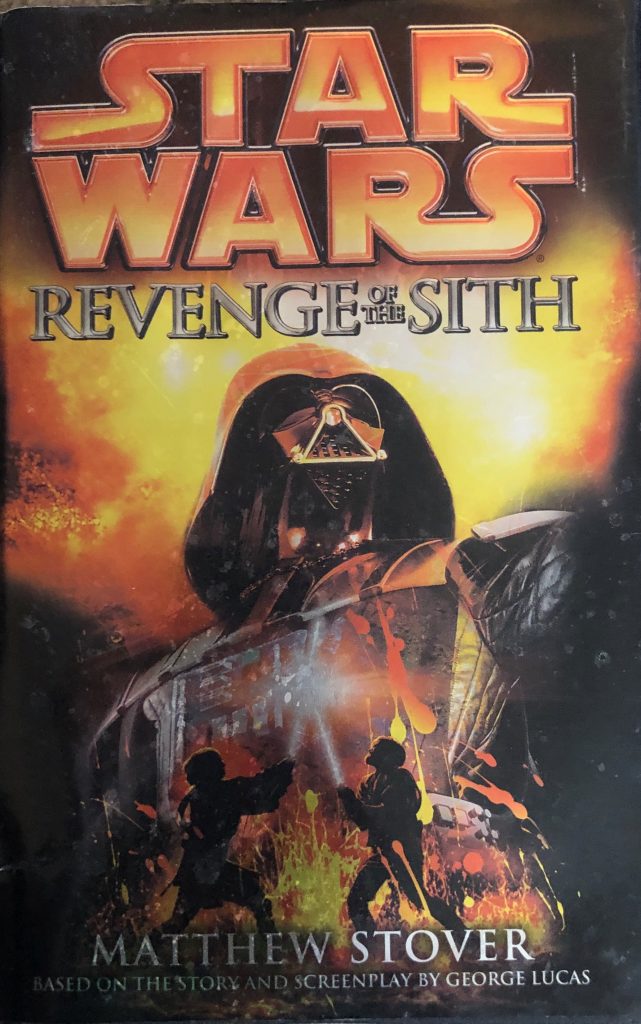 I loved this book as a teenager because I knew the story and the text was easy to follow. What kept me turning the pages though was its ability to expand on stories and characters we met in the film! The fantastic action sequences and the epic final lightsaber battle on Mustafar are so much more exciting on paper…if you don’t believe me, give it a read! 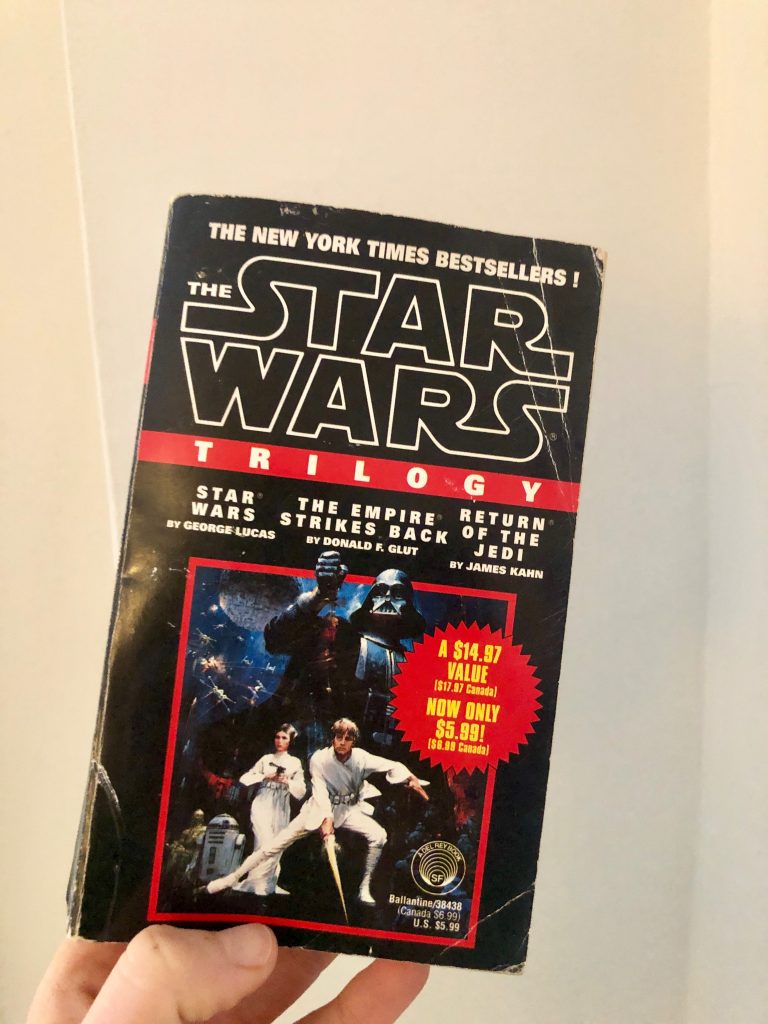 The writing: suspenseful and descriptive language are supported by eloquently crafted sentences that only true masters of writing can capture. The flow: rolling mini-climaxes throughout keep your focus on the story and beg your eyes and brain to read faster. The characters: more developed and human-like than in the films, the on-page characters will win your heart before you’ve reached chapter three. With adult-style sentence structure and flow…do you really need more reasons to put this on your must-read list? 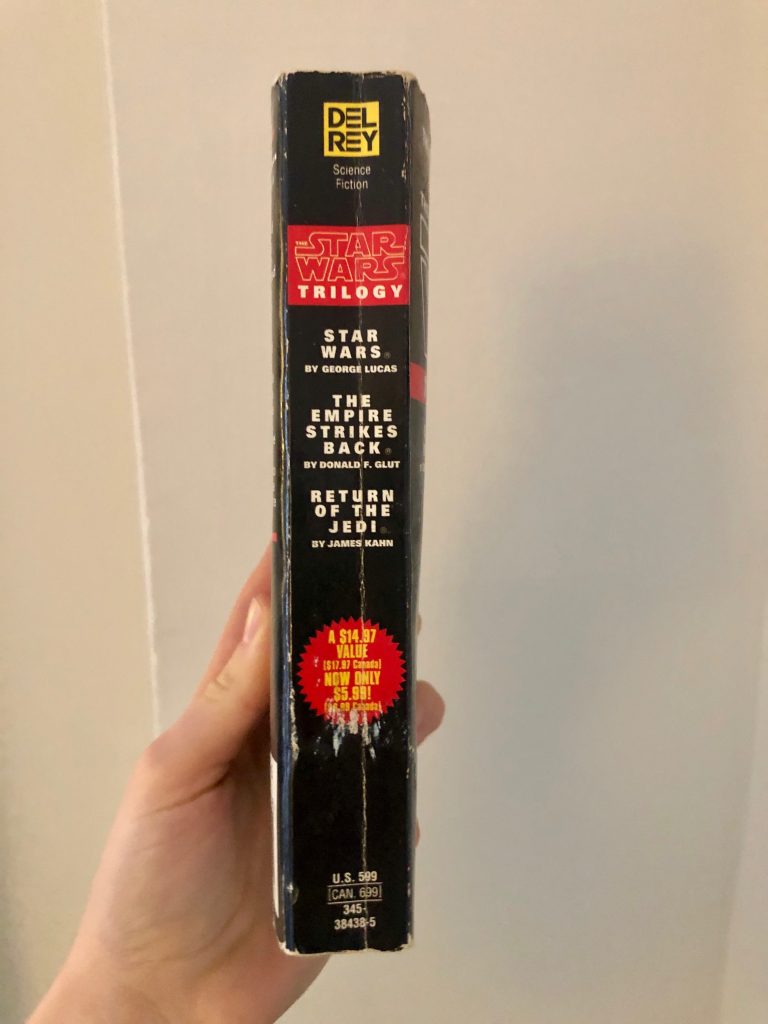 You can tell just how much I love my copy by the condition of the binding!

I can appropriately plead insanity in many cases (kidding), but I am well aware that William Shakespeare came long, long before George Lucas. However, that does not mean that a genius author backed by an even more genius publishing company didn’t think to combine the two famous writers’ styles! 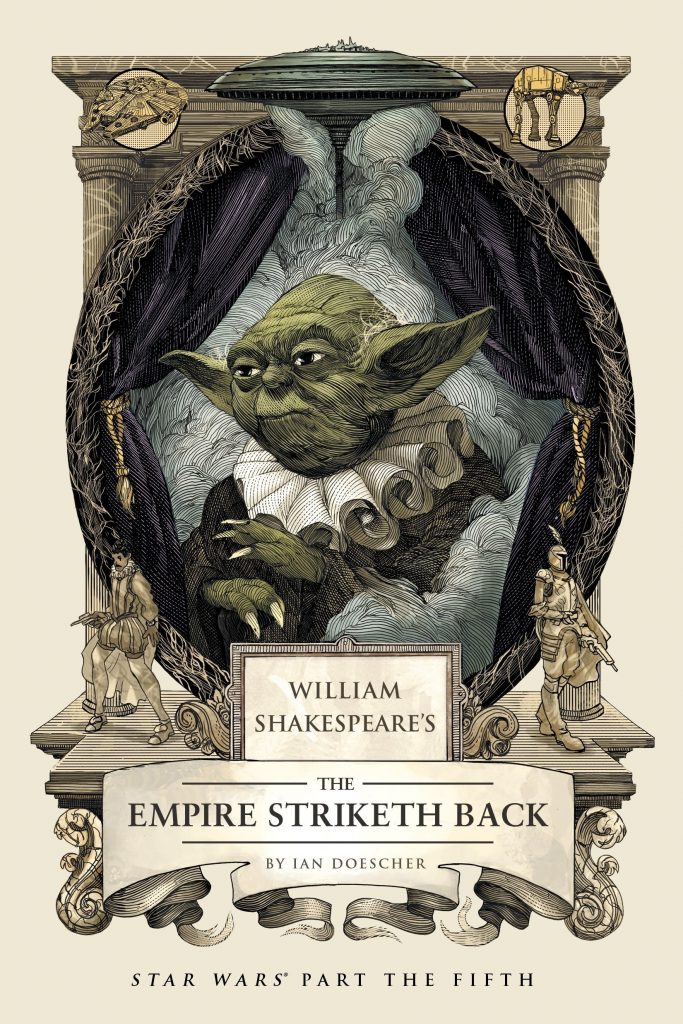 The stories of the original Star Wars trilogy have been re-written in blank verse and read just like one of Shakespeare’s’ plays…except the characters and story are from the franchise we all know and love! I was turned onto this gem of a series by one of my good friends in college, and since then, I went on to read, re-read, and eventually collect all the books in the series! 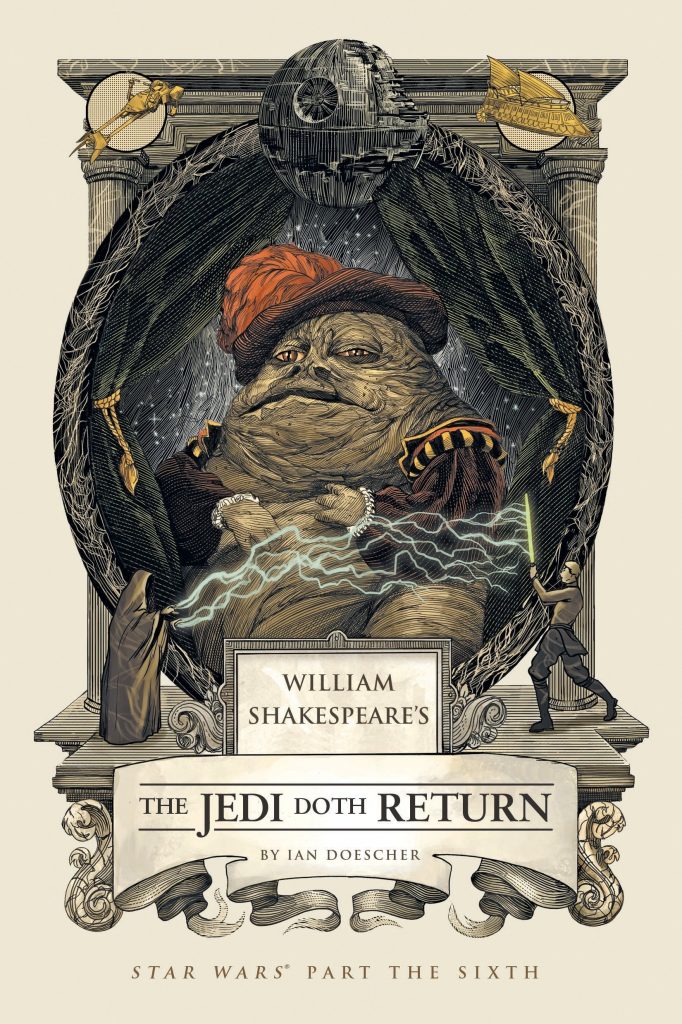 If you know the stories to the point of exhaustion like I do, give these books a shot! They re-ignited my love and interest for the space saga- they just might do the same for you! So, which of these books will you read first? If you could pick just one, which would it be? Would your child love to explore the illustrations with you? Leave me a comment and let me know!