It’s not fair to judge a restaurant on its opening night. Let me rephrase: opening nights of restaurants are hectic, unorganized, frantic, and, most importantly, rushed. Restaurants, especially at Walt Disney World, have to abide by set opening dates, and once advanced dining reservations open online, that date is set in stone.

Rewind a few years to Trattoria Al Forno’s opening night. The restaurant was late to seat every reservation, the wait staff was clearly confused and frazzled, and the food was absolutely nothing to write home about. And although I’ve heard decent things since, I’ve never been back. One bad experience can really taint your perception, but instead of sending me running for the hills, my experience at Sebastian’s Bistro was anything but mediocre. 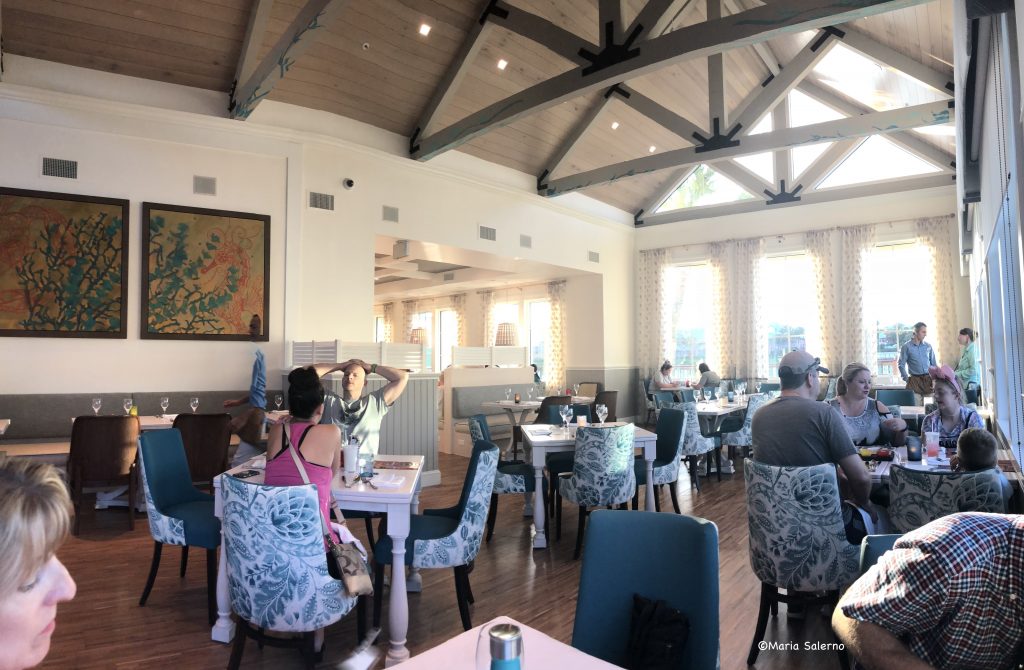 Attached to the new Banana Cabana Lounge, Sebastian’s Bistro sits on the calm shores of Caribbean Beach, overlooking what will be the new Rivera Resort and Skyliner. The walk to the restaurant from Old Port Royale is a short one, and the open-air, bright white color palette used in the lobby extends into the restaurant. 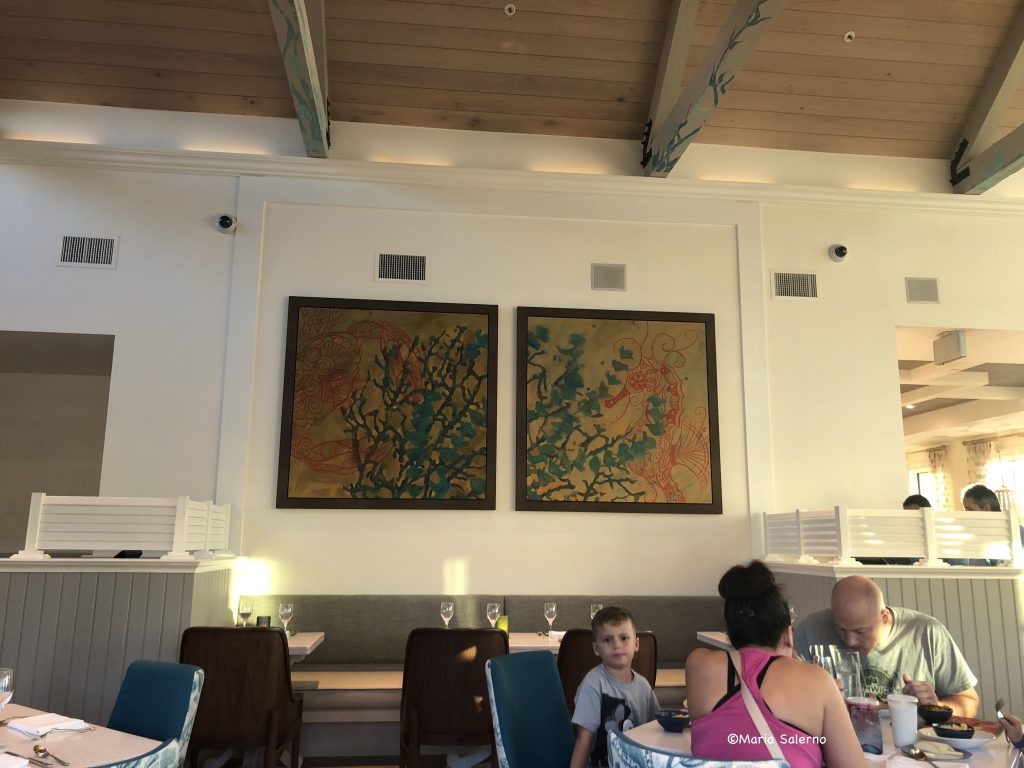 If the restaurant makes a splash, this won’t be an easy reservation to snag. Although the long, sheer curtains drench every table in sunlight, there is not a lot of seating to be had. Point blank: the restaurant is really tiny. 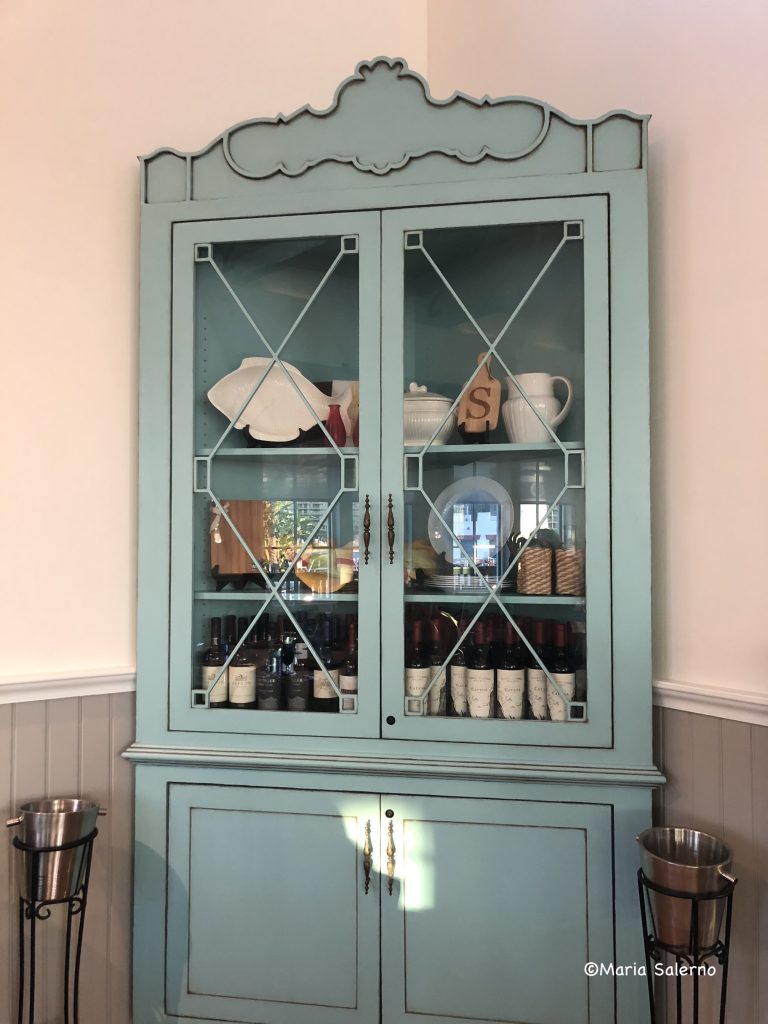 Save for the portrait of Sebastian on the wall, the nonexistent Little Mermaid themeing both surprised and delighted me. I was expecting to walk into a space flush with coral, bright colors, and cartoon fish. What I found instead was an airy, intimate, bright, island-y feeling space that was certainly themed more for the Caribbean itself than the classic film. 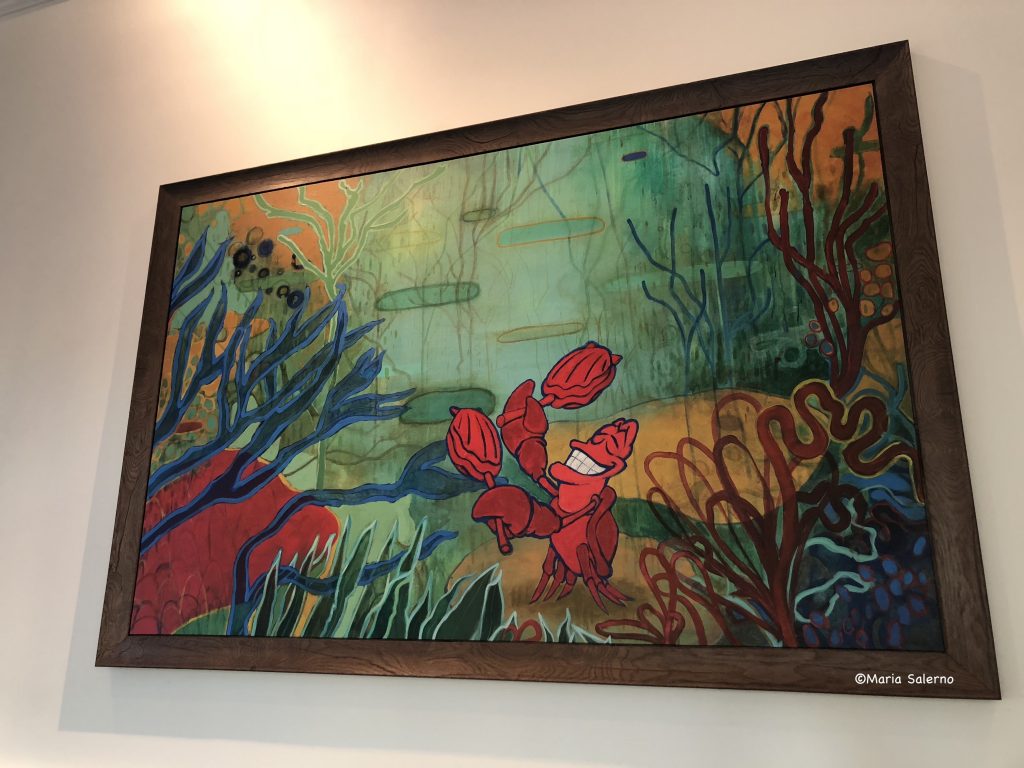 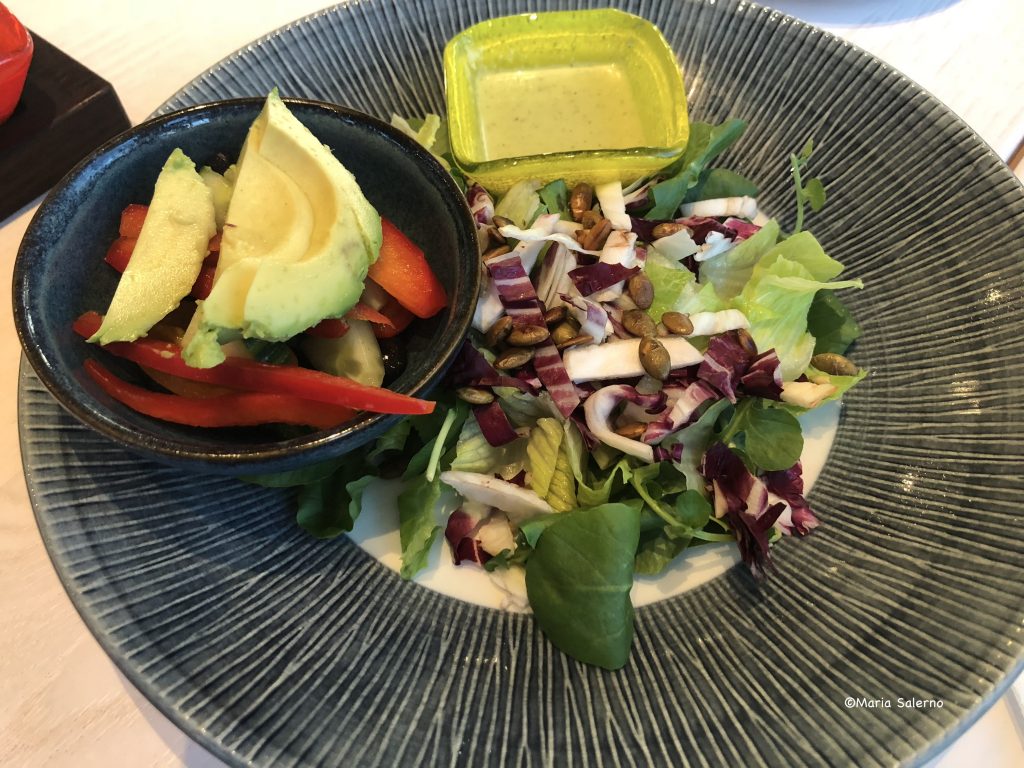 Because I can’t do a proper review without it, my party of 3 placed an order for a round of appetizers and drinks ahead of our meal. We started with the Caribbean pull-apart rolls that were accompanied by 3 spreads, and Sebastians’ House Salad. The salad was loaded with everything I love: mixed greens, black beans, avocado, and pumpkin seeds, and since every ingredient in that knock-out dish were super fresh, I give it two thumbs up. Oh, and my glass of very dry and light prosecco did a nice job of enhancing the fresh, bright flavors of the salad! 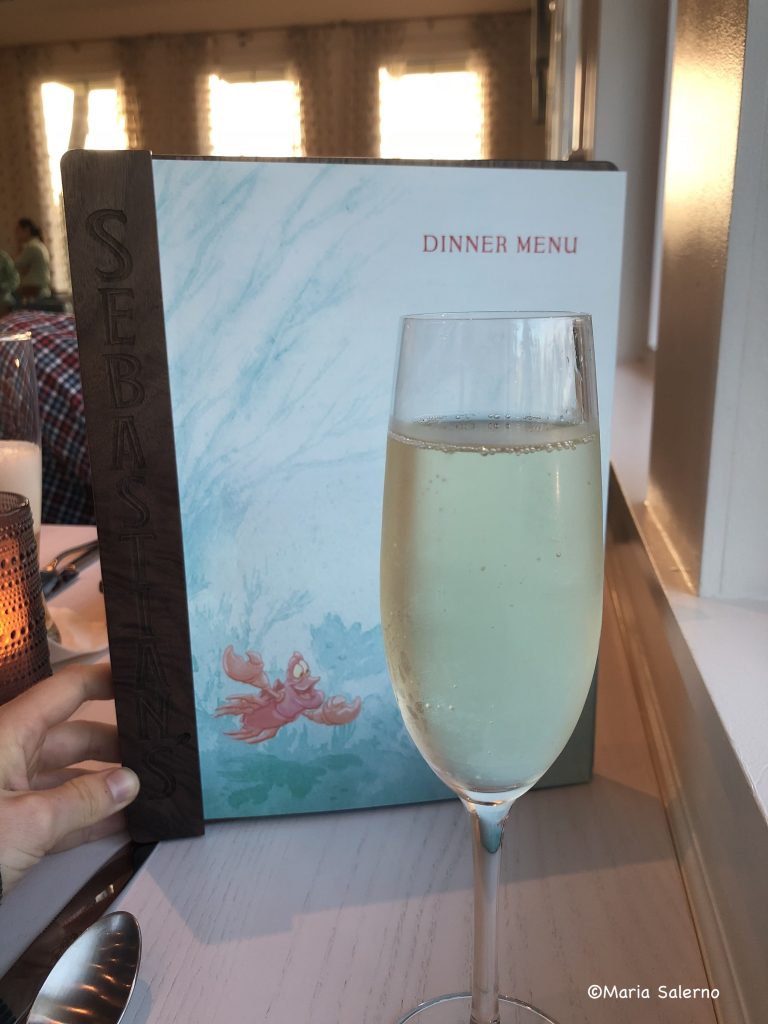 The Caribbean pull-apart rolls honestly deserve an entire article- no, an entire blog- dedicated to their deliciousness! They freshly-baked rolls came to the table steaming hot, and after one bite of roll smeared with the sweetly savory guava butter, I knew I would have to play elbow jockey with the other members of my party for the last roll! The jerk oil was a close second, but the savory roll paired with that sweet guava butter is worth the dining reservation alone! 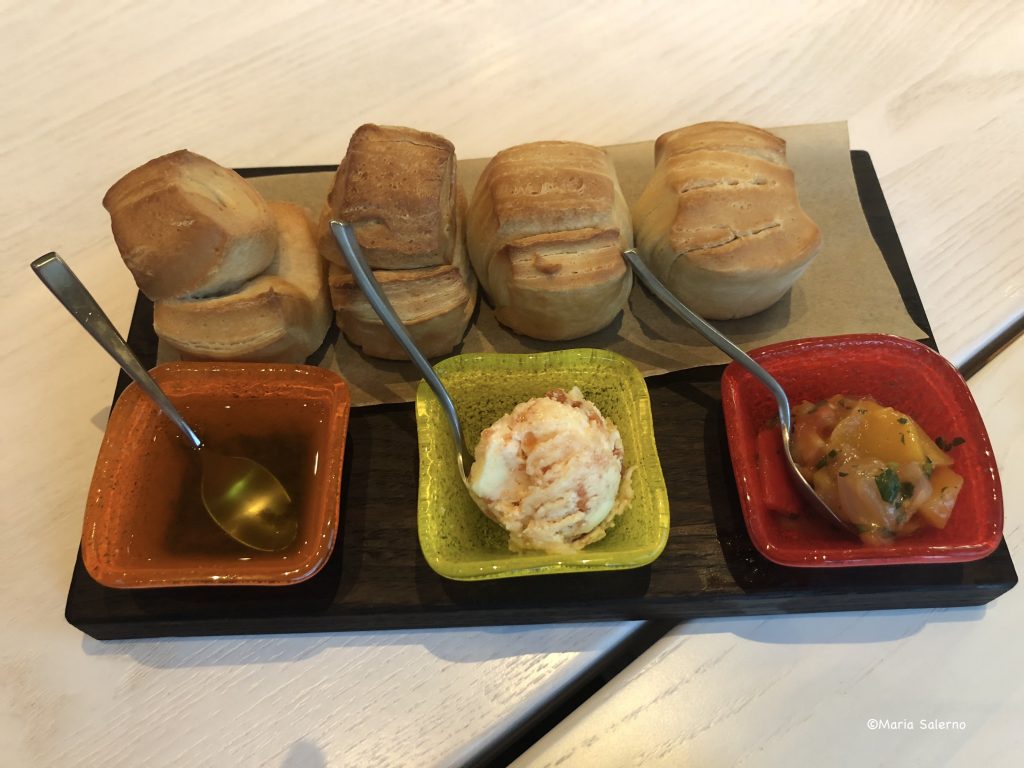 For research purposes, I had to order not one, but two entrees! To keep my waistline in check though, I opted for the kids’ version of two plates that come in full portions too and, according to my waiter, are prepared in the exact same way. 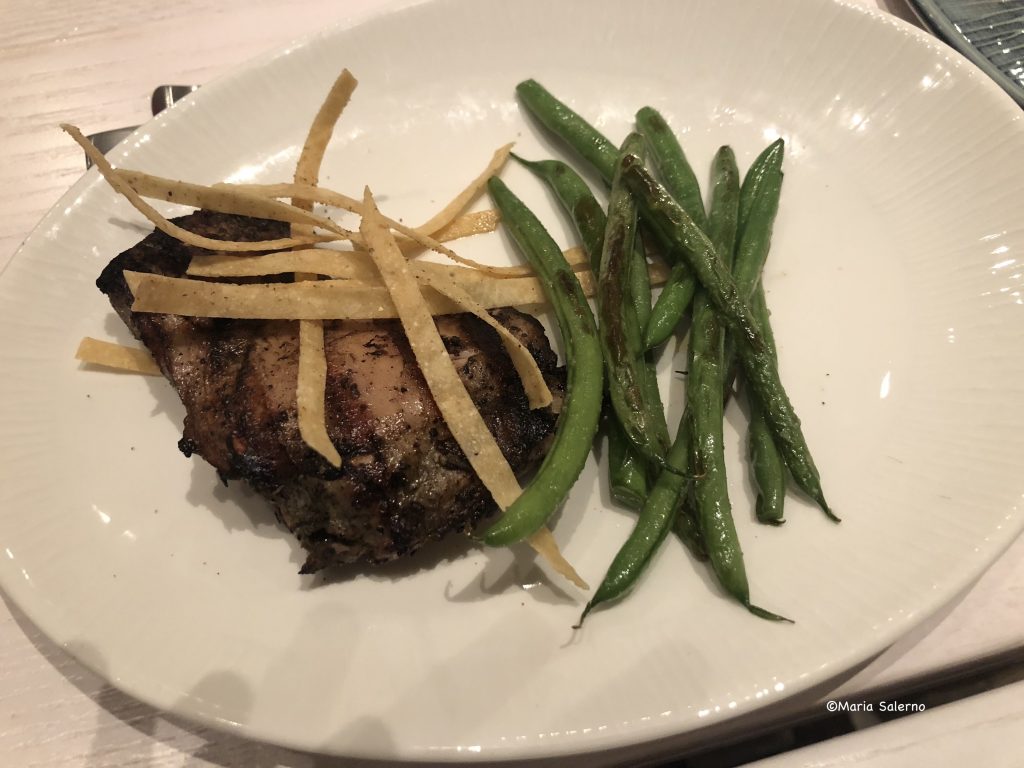 First, I ordered the jerk chicken with black beans, rice, and veggies. Descriptors like ‘jerk’ and ‘curry’ might put off some folks with tame palettes, but let me say this: nothing that we were served was overly spicy nor too exotic. Jerk seasoning is usually very spicy, but the rub on the chicken was just flavorful enough to bring out the perfectly-cooked meats’ natural flavor. The black beans were whole, firm, and clearly not re-fried, which nicely segues into my next point. 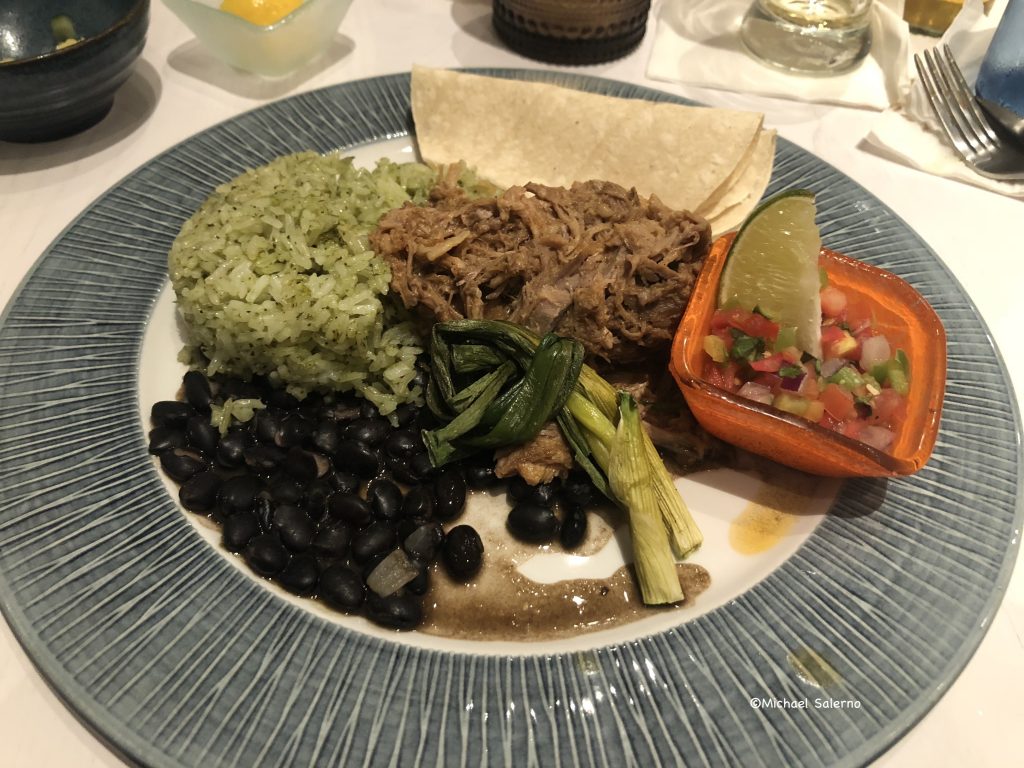 A member of my party hesitantly ordered the slow-cooked pork shoulder as his entrée. It was a hot day when we visited, and we still had a lot of walking to do, and his main concern was that the dish would be too heavy and greasy- and I conquered. He went ahead with his order anyway and decided to face the consequences…but everything on his plate was clearly cooked with absolutely no added fat or oil. The pork was fork-tender, the rice and beans were flavored with spices instead of grease, and the house-made corn tortillas were light and chewy! And if your travel group boats big appetites, the portion size of every adult entrée was huge enough to easily split! 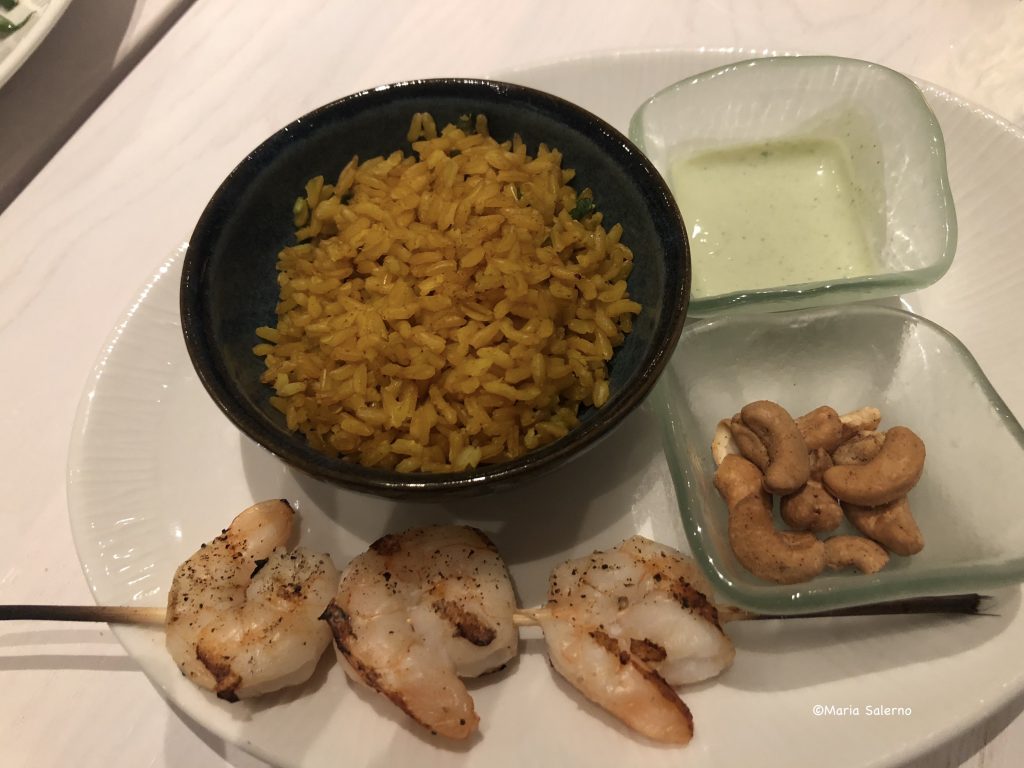 Last but certainly not least, the grilled shrimp with cilantro-lime cream was brought to the table. I can’t judge portion size since I opted for 2 kids’ entrees, but I can certainly judge on flavor! The shrimp itself was not seasoned at all, but the cilantro-lime cream was all it needed to elevate it! I chose a side of sautéed veggies and yellow rice with this dish, and again, the sides were flavored with real ingredients like fresh lemon and pepper as opposed to oil. If you order the shrimp, get a bite of shrimp with black beans, rice, and sautéed veggies on your fork for an island-inspired party in your mouth! 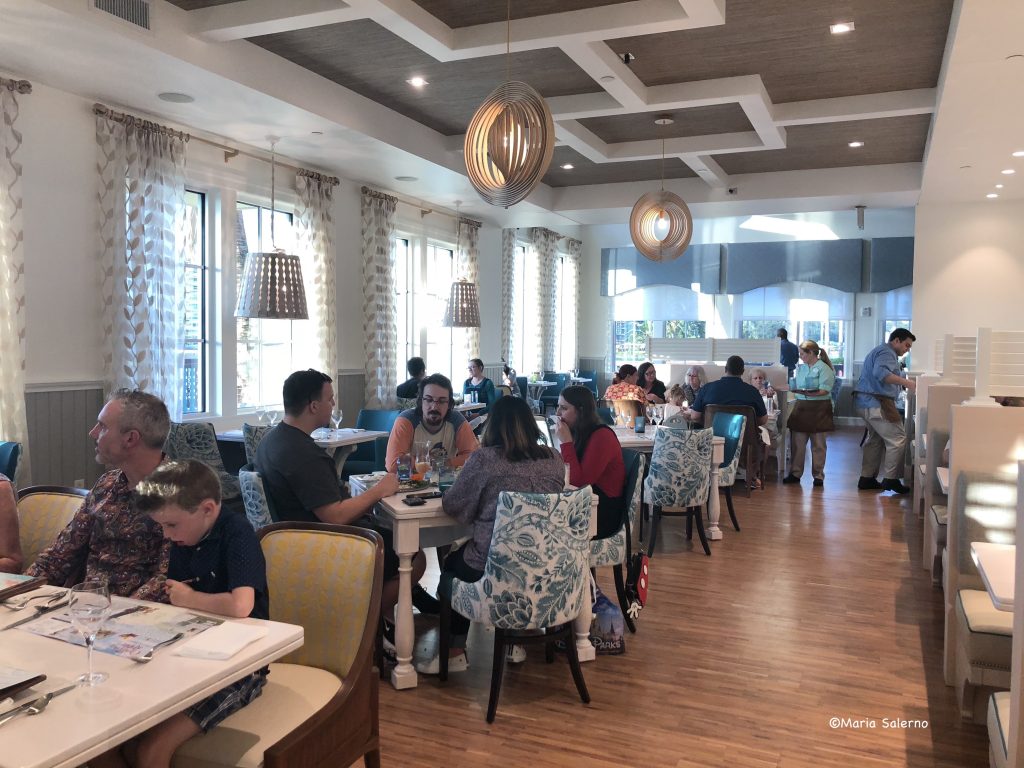 A brand-new restaurant that’s been in operation for less than a week at the most popular vacation destination in the country has big shoes to fill. I was seated at the time of my reservation, the wait staff was extremely knowledgeable and accommodating, and the food…oh that food. I don’t’ have one negative thing to say about the food I was served. The quality, quantity, and freshness of every dish was apparent.

If you’re planning to try Sebastian’s Bistro on your next Walt Disney World trip, my advice is go go as soon as you can! It’s not an unusual occurrence for a WDW restaurant to open with fantastic, high-quality food that somehow deteriorates over time. Restaurants like Be Our Guest and Skipper Canteen are two famous examples. I have every hope that Sebastian’s Bistro will maintain their current pace, because I can’t wait to go back for more of those rolls!