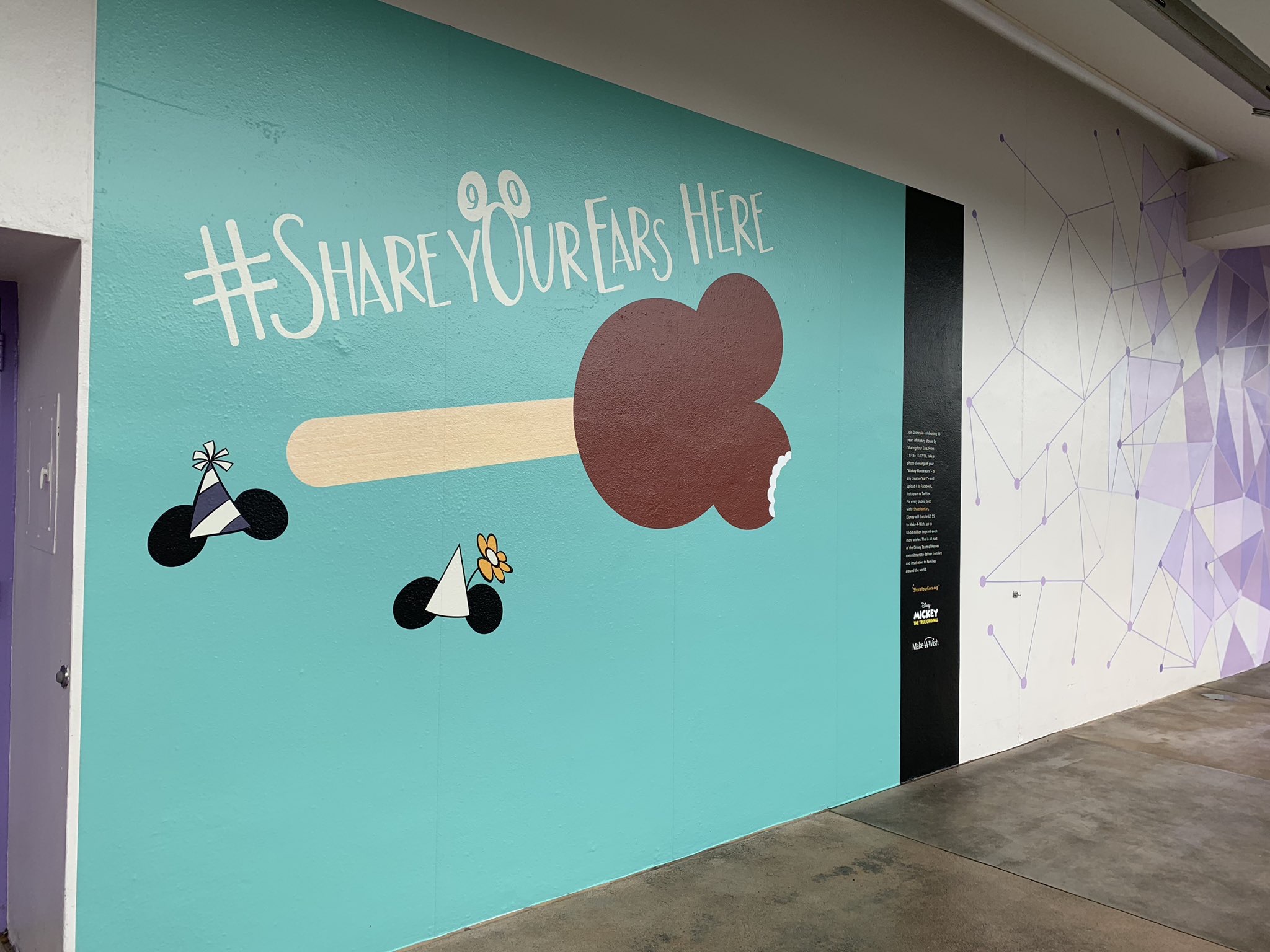 The purpose of #ShareYourEars is to celebrate Mickey Mouse’s 90th birthday while raising money for Make-a-Wish. For every photo you post on Facebook, Instagram, or Twitter with the hashtag #ShareYourEars from now until November 17, 2018, Disney will donate $5 to Make-a-Wish, up to $2 million to help the non-profit grant more wishes. To read more about the campaign, please CLICK HERE.

Sharing those ears also just got easier thanks to Walt Disney World! They have recently painted walls in each of the four theme parks and Disney Springs.

The #ShareYourEars wall in the Magic Kingdom is located right next to the famous Purple Wall in Tomorrowland.

At Disney’s Hollywood Studios, the #ShareYourEars photo wall is near the old Pixar Place area.

At Disney’s Animal Kingdom, guests can find the #ShareYourEars wall on the way to Pandora – The World of Avatar.

Over at Epcot, the #ShareYourEars wall is located on Imagination Pavilion which houses the classic Figment ride.

First stop of the day was at EPCOT, some we were too late to get it last night after dinner. #shareyourears #EPCOT #mickeys90 #mickeys90thbirthday #imaginationpavillion https://t.co/zQmKR6Qq5W pic.twitter.com/pPCs4vvifb

Finally, at Disney Springs, you can find the colorful wall on the West Side.

#ShareYourEars at @DisneySprings—now though Nov. 17, every photo posted to Facebook, Instagram or Twitter using the hashtag #ShareYourEars unlocks a $5 donation from Disney to @MakeAWish to make even more life-changing wishes come true! Find our fun photo wall on the West Side. pic.twitter.com/1dCt29khKE

One of the great things about these walls is that you don’t even have to have a pair of ears to participate. The ears are painted right on the way so all you have to do is stand there is say, “cheese”!

Don’t have plans to visit Walt Disney World before November 17, 2018? No worries! As mentioned, you can still post your #ShareYourEars photo on social media. These walls are also popping up at other Disney locations around the world including Disneyland Resort and Disneyland Paris. At Hong Kong Disneyland, you can find photos frames with the hashtag on Main Street U.S.A. Out to sea? Special photos ops will be available on all four Disney Cruise Line cruise ships.

Panning a visit to Walt Disney World or any other Disney destination? Fill out the form below or send an email to Holly@MickeyTravels.com. As an agent with MickeyTravels (a Platinum Earmarked Agency), I will be on hand to help you with everything from finding your perfect package to nabbing those hard-to-get dining and FastPass reservations. I work with all Disney Destinations. Best of all, my services are absolutely FREE. Get in touch via email at Holly@MickeyTravels.com or calling 954.401.9577. Also, make sure to CLICK HERE to follow along with my Facebook page for all things Disney and giveaways!