There are many magical offerings when you sail with Disney Cruise Line. You can ask anyone who has sailed on a Disney Cruise and I’m willing to bet that one of their favorite things about their cruise was the entertainment. And, I’m not talking your regular run-of-the-mill shows you may see on other cruise lines. I’m talking about Disney Cruise Line’s Broadway-caliber shows featuring your favorite Disney movies, musicals, and characters!

If you were interested to know which shows you will find on each of the four Disney Cruise Line ships, this guide is for you! Learn more about all the captivating shows below: 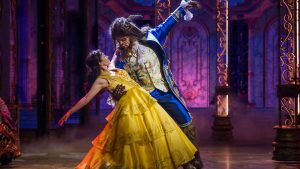 “Beauty and the Beast” aboard the Disney Dream

Disney’s most creative minds joined forces with iconic Broadway artists to bring the classic “Beauty and the Beast” story to life on the high seas. This innovative stage show takes favorite songs from the movie and transforms them into spectacular, show-stopping productions while lavish costumes and puppetry bring a new perspective to beloved characters. Guests of all ages will be delighted by enchanted characters and songs from the original “Beauty and the Beast” and even two numbers from the live-action film. 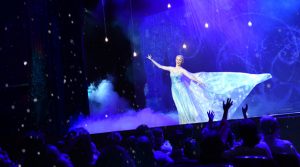 “Frozen: A Musical Spectacular” aboard the Disney Wonder

Guests are invited to join in the heartwarming tale of Anna and Elsa in “Frozen: A Musical Spectacular.” This production, which is based on the hit movie, “Frozen,” follows the two sisters after a childhood accident changes their futures. Featuring state-of-the-art designs and technology, this original stage show is guaranteed to be a frozen paradise for all families! 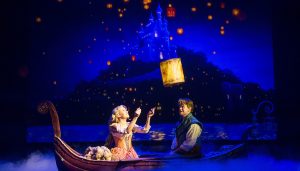 “Tangled: The Musical,” presented exclusively aboard the Disney Magic, combines a heartfelt story, an enchanting score and lavish production numbers to showcase the thrilling adventure of Rapunzel and Flynn Rider, as they face ruffians, thugs and a budding romance on an exhilarating journey of self-discovery. (Ryan Wendler, photographer)

“Tangled: The Musical” aboard the Disney Magic

Guests sailing aboard the Disney Magic will be entranced when they see “Tangled” come to life on the high seas. Included in this original Disney Cruise Line stage spectacular is three new songs that were composed exclusively for the musical by Academy Award-winning composer, Alan Menken and Grammy Award-winning lyricist, Glenn Slater. Puppetry in the production is brought to life by master puppet designer, Michael Curry. 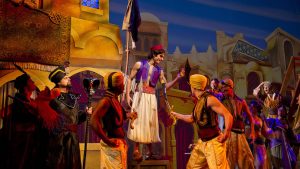 New to the Disney Fantasy is the Broadway-style production “Disney’s Aladdin – A Musical Spectacular.” The live stage show, performed in the 1,340-seat Walt Disney Theatre, features the cast from the classic animated Disney film, “Aladdin,” in a fast-paced musical comedy. Magic lamps, wise-cracking genies, princesses, evil wizards, a magic flying carpet scene and soaring music are all a part of this stage spectacular. (Matt Stroshane, photographer)

“Disney’s Aladdin – A Musical Spectacular” aboard the Disney Fantasy

Those sailing the Caribbean aboard the Disney Fantasy are in for a real treat with “Disney’s Aladdin – A Musical Spectacular” base on the popular Disney movie, “Aladdin.” This stage production features amazing special effects and technology – often spilling into the audience! Your favorite songs from the original movie are featured plus a new song composed just for the Disney Cruise Line production – “To Be Free.” 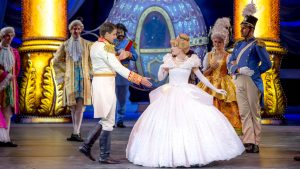 “Twice Charmed: An Original Twist on the Cinderella Story” aboard the Disney Magic

“Twice Charmed” ask guests, “What if Cinderella never got that chance to slip on the glass slipper?” The show picks up where the classic fairytale ended and gives us a new take on the original story. The production aboard the Disney Magic features pop and rock n’ roll elements to create a score that is not to be missed! Also featured are six original songs and classics such as “Bibbidi-Bobbidi-Boo” and “A Dream is a Wish Your Heart Makes.” 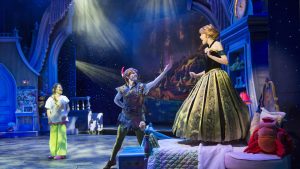 “Disney Dreams … An Enchanted Classic” tells a bedtime story of a young girl who realizes the power of her dreams with the help of popular characters from beloved Disney features. On the Disney Magic, Anna, Elsa and Olaf from the animated hit “Frozen” make their stage show debut at sea during the Broadway-style production performed at the Walt Disney Theatre. (Kent Phillips, photographer)

This production made to be a just like a bedtime story read to a little girl features your favorite classic Disney stories through renditions of songs from “Pinocchio,” “Cinderella,” “Aladdin” and more. Guests will see the strength of positive thinking and how an encouraging attitude can affect the whole world. 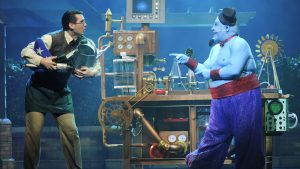 Every night is show time at Walt Disney Theatre, an elegant, 1,340-seat palace onboard the Disney Dream that is equipped with advanced theatrical technology and state-of-the-art sound, lighting, staging and set design. Premiering on the Disney Dream and headlining the musical repertoire is Disney’s Believe, an original stage spectacular that combines a heartfelt story about a father and daughter with a captivating musical score, a comical and insightful performance by Genie from Disney’s “Aladdin” and appearances from more than 20 of Disney’s most beloved characters. (Gene Duncan, photographer)

“Disney’s Believe” aboard the Disney Fantasy and Disney Dream

In this original Disney production, you will see what it takes for a loving daughter to help her father see what life is like beyond work – Just a dash of Disney magic! Guests will enjoy this spellbinding original musical about a workaholic father is able to reconnect with his daughter with the help from some Disney characters. Featured in this modern-day fable is songs from “Peter Pan,” “Mary Poppins,” “The Lion King” and more. 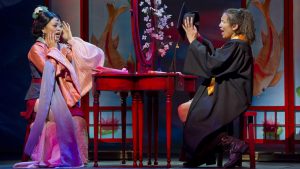 “Disney Wishes” is a Disney Cruise Line stage spectacular, presented exclusively aboard the Disney Fantasy. The show, performed in the 1,340-seat Walt Disney Theatre, is a heartfelt story about three best friends who discover the secret to being a grown-up is staying connected to their inner child. Full-scale production numbers and special effects bring excitement to the stage as the cast performs original songs and classic Disney tunes with a contemporary twist, including “Honor to Us All” from “Mulan” featuring Mulan.

“Disney Wishes” aboard the Disney Fantasy

This stage show features full-scale production numbers from “Lilo & Stitch,” “The Jungle Book,” “Mulan” and more. It portrays a group of young teens who go on the ride of their lives before graduation with some of their favorite Disney pals all with a contemporary twist. 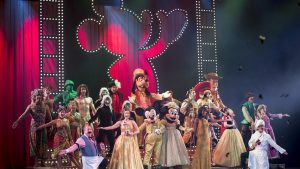 Every night is show time at Walt Disney Theatre, an elegant, 1,340-seat palace onboard the Disney Dream that is equipped with advanced theatrical technology and state-of-the-art sound, lighting, staging and set design. The Golden Mickeys is a Disney Cruise Line guest favorite and an award-style show celebrating the musical heritage of Disney animated films. This production showcases an extra sprinkle of glitz and glamour on the Disney Dream with new musical numbers, enhanced technology and dazzling special effects. (Matt Stroshane, photographer)

“The Golden Mickeys” aboard the Disney Wonder and Disney Dream

Get ready to walk the red carpet as you are invited to a Hollywood-style awards show at sea! When guests enter this nighttime extravaganza held in the Walt Disney Theater, you will be treated to numbers from “Tarzan,” “The Little Mermaid,” “The Hunchback of Notre Dame” and more. Everyone is a winner who attends this party!

What musical is Broadway-style production is your favorite aboard Disney Cruise Line? Let us know in the comment below!

Let’s start planning your Disney Cruise! Fill out the form below or send an email to Holly@MickeyTravels.com. As an agent with MickeyTravels (a Platinum Earmarked Agency), I will be on hand to help you with everything and offer competitive onboard credits. I work with all Disney Destinations. Best of all, my services are absolutely FREE. Get in touch via email at Holly@MickeyTravels.com or calling 954.401.9577. Also, make sure to CLICK HERE to follow along with my Facebook page for all things Disney and giveaways!