The opening of Star Wars: Galaxy’s Edge at Hollywood Studios isn’t the only way for Star Wars fans to feel the force in 2019.  Disney Cruise Line is offering a special Star Wars Day at Sea celebration on select sailings in early 2019.  This is the perfect adventure for fans young and old with a cast of characters and an array of activities that rival anything you’d find at Mos Eisley Cantina.  We think that these special 7-night Caribbean sailings aboard the Disney Fantasy are simply not to be missed.  To give you a hint of the Star Wars fun that awaits here are 12 special onboard activities offered during Star Wars Days at Sea. 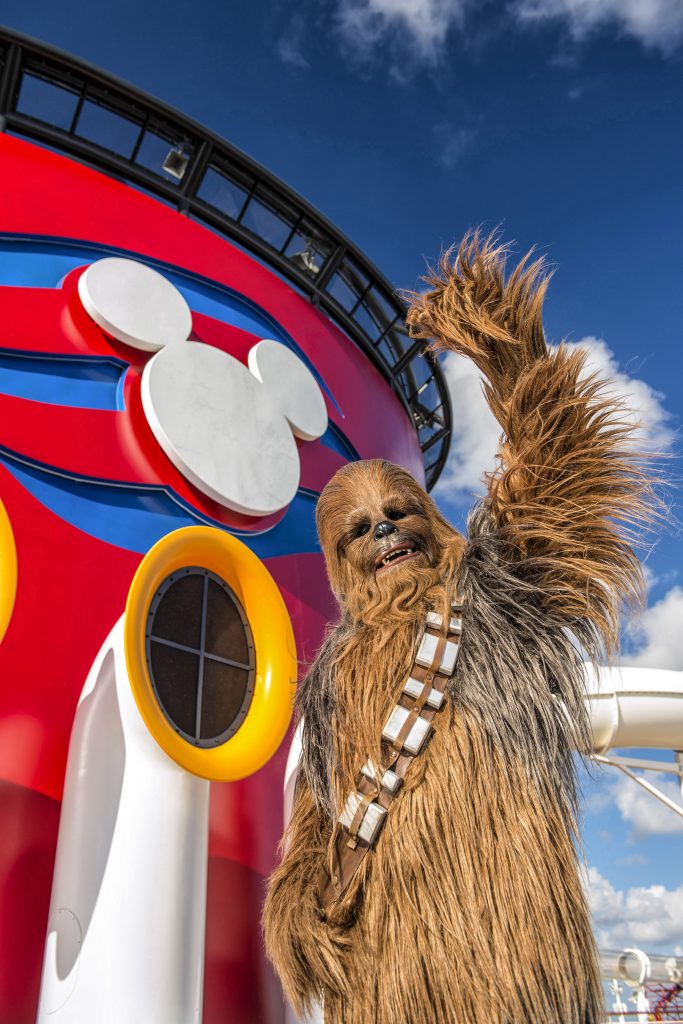 1. Character Meet and Greets –  During Star Wars Day at Sea, passengers will come face to face with many of your favorite characters.  Whether it’s lining up to have your picture taken with the likes of Chewbacca, C-3PO, R2-D2 and Darth Vader or bumping into Boba Fett, the Jawas or Stormtroppers on deck, you’ll feel like you’re in the middle of an extraordinary adventure set in a galaxy far, far away.

2. Special Guest Speakers – It’s like Comic-Con at Sea! Star Wars enthusiasts traveling on one of these special sailings will be able to attend panel discussions where you can delve a bit deeper into your fandom! 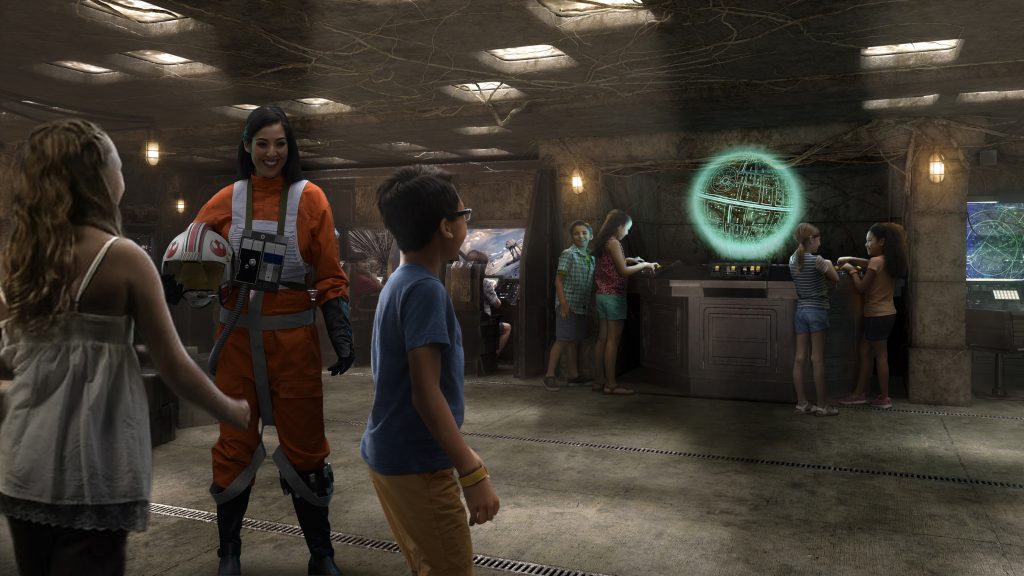 3. Star Wars Resistance Base – During your child’s visit to the Oceaneers Club (the onboard Children’s Activity Center), kids will be given the task of defending the passengers against the First Order in this puzzle-solving adventure game!
4. Star Wars Drawing Academy – Young Padawans can learn to draw some of your favorite Star Wars characters including Yoda, BB-8, Darth Vader and more during this specially themed tutorial! 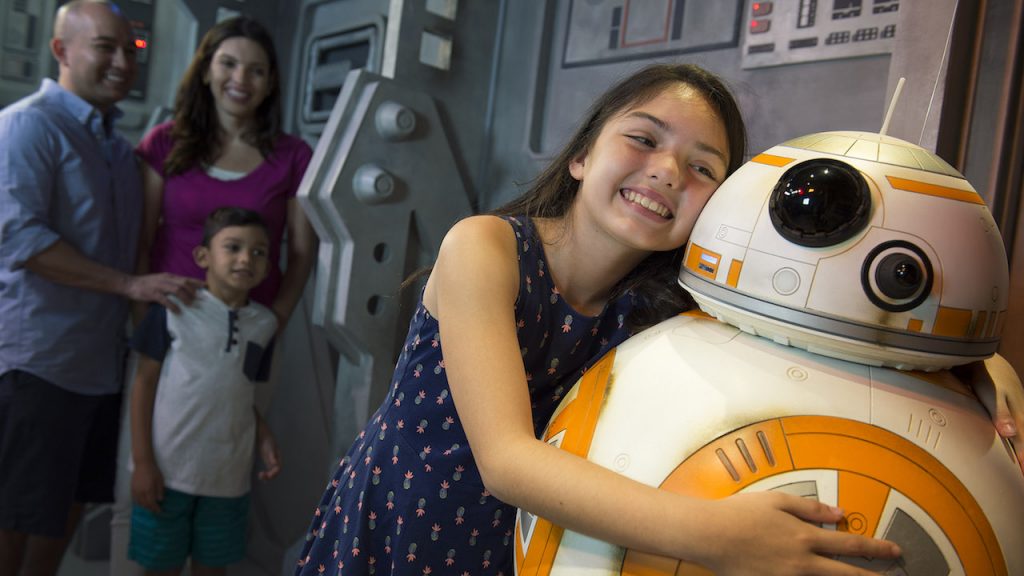 5. Recruitment Effort With BB-8 – Do your little ones have aspirations of joining the Resistance? Check them into the Oceaneer’s Club on Deck 5 during the Star Wars Day at Sea and watch what happens when BB-8 and a pilot turn up looking for recruits!
6. Family Trivia Night – Pit your Star Wars knowledge against other families with a series of challenging games designed to test your knowledge! 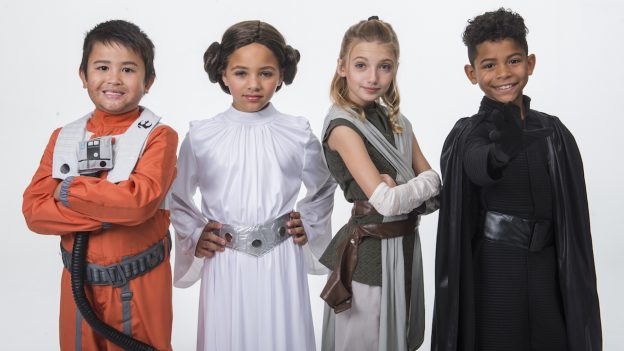 7. Dress the Part – No Star Wars Day at Sea would be complete without an opportunity for you and your family to dress the part.   Don your favorite Star Wars costumes and join other fans for this fun cosplay party in the ship’s Grand Atrium.  During this sailing, the Bibbidi Bobbidi Boutique will also be taking appointments for parents looking to treat their kids to a special intergalactic transformation! 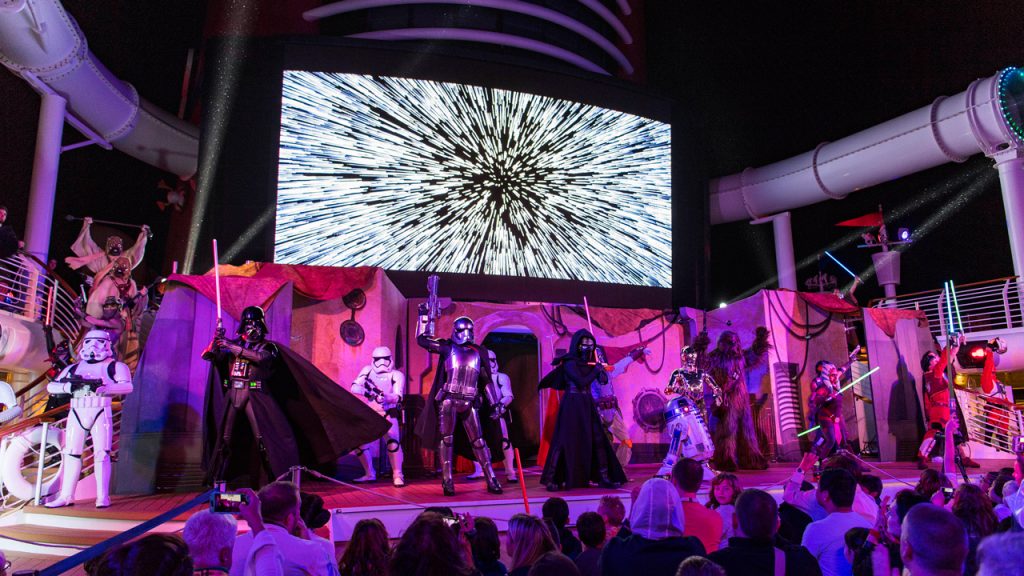 8. Summon the Force Show – As the Star Wars Day at Sea winds down, you’ll be absolutely blown away by this show taking place on the pool deck.  This production will take you through some of the saga’s most iconic moments and features Rey, Darth Vader, Kilo Ren, Chewie and many more of your favorite characters. 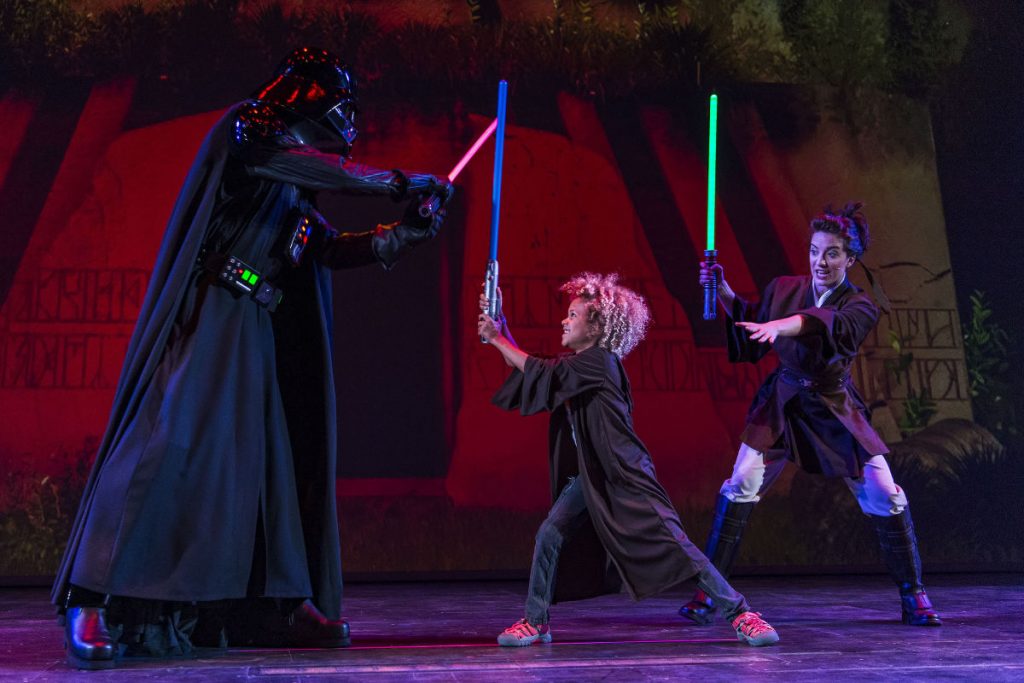 9. Jedi Training: Trials of the Temple – Sign your little ones up to be a Jedi-in-training and they’ll take part in this fun stage show while you sit back and relax.  Not only will they be schooled in the ways of the force but they’ll go toe-to-toe with some pretty formidable Star Wars baddies like Darth Vader. You’ll want to have those cameras at the ready as it makes for the perfect photo op!

10. Star Wars Movie Marathon- This sailing is the perfect time to catch up on some of your favorite Star Wars films. The movie theater aboard the Disney Fantasy will play films from the saga both old and new throughout your sailing. 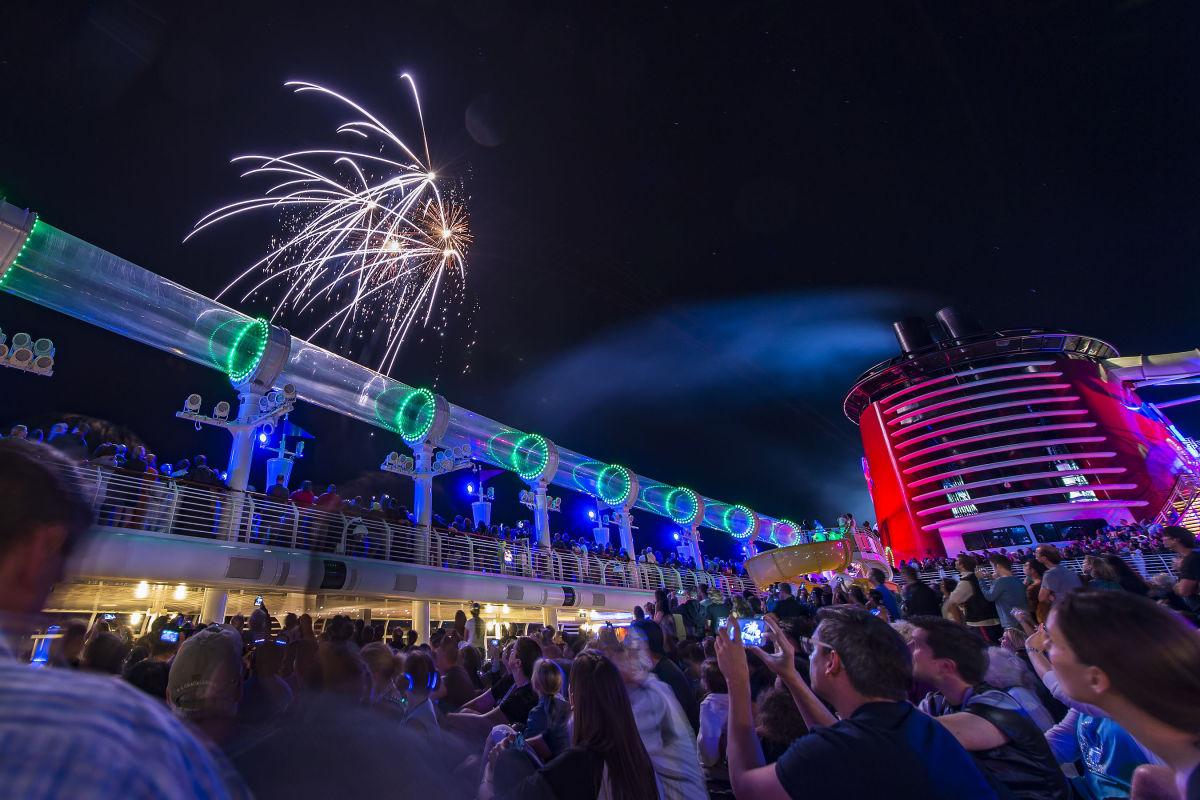 11. Summon the Force Fireworks – One of our favorite things about going on a Disney Cruise is enjoying the incredible fireworks at sea. Disney Cruise Line is the only Cruise Line in the World that offers this.  As you can imagine during a Star Wars  Day at Sea sailing you’ll be treated to an out-of-this-world fireworks extravaganza set to John William’s classic score. It’s the perfect ending to a perfect day! 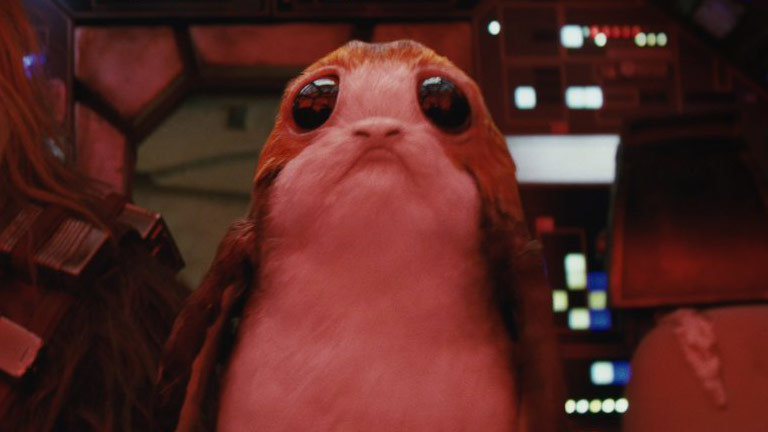 12. Porgs Onboard! Scavenger Hunt – How could we possibly end this list without a tip-of-the-hat to the latest loveable creatures in the Star Wars universe, the Porgs! During this adventure, you join forces with Chewbacca to locate the Porgs that have been wreaking havoc throughout the ship.  Deliver the goods and you may even be able to meet the legendary Wookie himself who would like to show his gratitude!
So what are you waiting for? Make book at Early 2019 7-Night Disney Caribbean Cruise aboard the Disney Fantasy and check out all of these fun happenings for yourself!  Star Wars Day at Sea will only be available during the following Caribbean cruises sailing from Port Canaveral Florida and departing on the following dates: Jan. 5, 12, 19, 26, Feb. 2, 9, 16, 23 and March 2.

Fill out our form below and a MickeyTravels agent will be in touch with your FREE No Obligation Disney Cruise Line quote.