Rumors and Secrets Swirling Around Epcot

Epcot might be sitting on a big secret. Just this week, The Walt Disney Company filed for over 30 building permits for the Epcot area alone, raising many rumors as to what exactly might be coming to the park in the not so distant future. Anything Disney Parks does that that Disney itself has not announced brings a tornado of rumors within hours of the newest development, and like each of the previous times, some of those rumors are valid…while most are just plain silly! What do we think might be coming to Epcot? We aren’t sure! And no one can be, but backed by what we know and what is likely, we have a few guesses up our sleeve!

At D23, the Disney Parks Panel announced a new restaurant for Epcot’s Future World that will invite guests to dine in a floating space station while overlooking dark, distant galaxies. It sounds like a pretty cool concept, and given the current stuck-in-the-1980’s look of Future World, the announcement was well-received to say the least. So, are these new permits for the new restaurant?

The permits have been filed for an undeveloped area sitting outside of Epcot’s gates, and to have the space restaurant sit outside the park means hungry diners needn’t purchase an admission ticket to eat at the restaurant! Epcot doesn’t have any outstanding restaurants in Future World, and this would be a great way to generate business beyond park guests, though its unlikely that the restaurant will be built there. What makes this one really unlikely has nothing to do with a rumor…Disney announced that the restaurant will go in the area next to Mission: Space. It really is the logical spot for the new restaurant, and previous concept art further proves it.

Guardians of the Galaxy Attraction?

Everyone knows by now that the Guardians of the Galaxy attraction will be housed in the old Universe of Energy Pavilion, and if you need concrete proof, just check out the concept art for the completed attraction. If you’ve ever ridden Universe of Energy when it was up and running, you know just how huge that building is, and how fitting the structure is to build a new attraction inside! 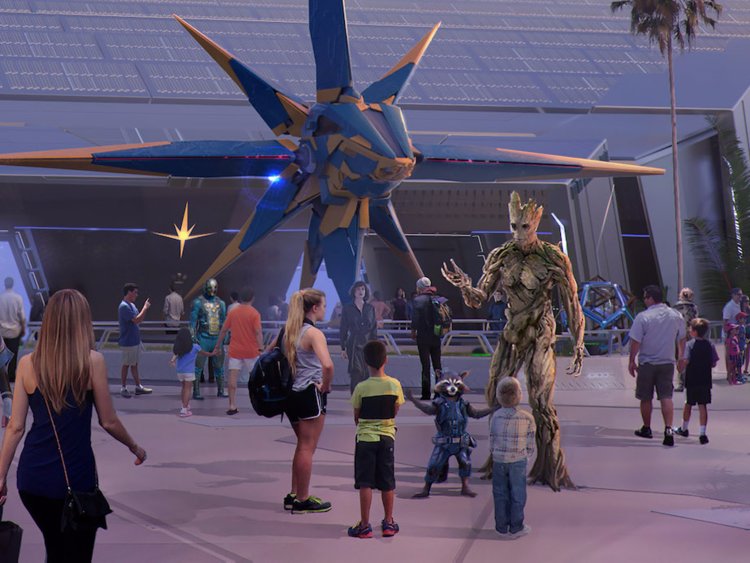 With the announcement of the attraction came the claim by Disney that it would be the “largest indoor rollercoaster” upon its completion. Wow, that’s a BIG claim! Naturally, the world’s largest indoor roller coaster will need to be in a pretty gigantic building, so is it possible that the new building permits were filed to allow Imagineers to build an addition onto the already existing building to make it large enough to fit the ride? It’s unlikely! The building in question sits to East of the park, and the undeveloped area Disney has indicated on their permit legend shows the work will take place to the West. I guess that big building really is big!

D23 is always full of exciting announcements of park improvements and upgrades, and so many Epcot fans including myself breathed a huge, enormous, massive sigh of relief when it was announced that Future World would undergo a massive construction project that will ultimately give us what we’ve wanted for years and years: a current Future World! 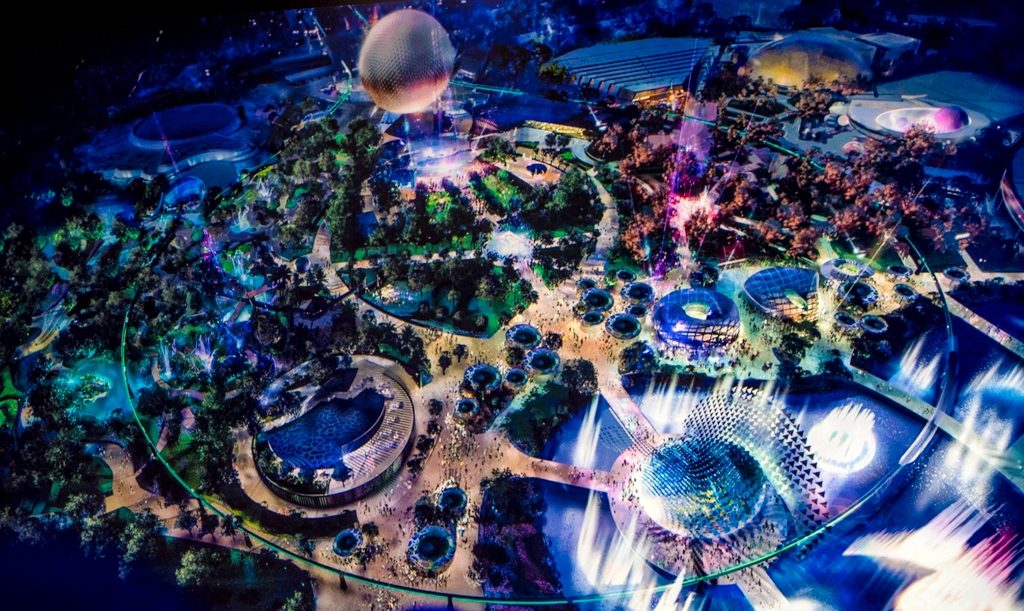 Since that announcement, there hasn’t been the slightest sign of construction in the area, and I’m starting to wonder if their initial plan of finishing it in time for Walt Disney World’s 50th Anniversary will really come to fruition. But maybe that construction is taking place outside of the park? Given the location of the permits filed, it just wouldn’t make sense for them to have anything to do with the new Future World. The overhaul will likely be just that: an overhaul, not an entirely new section. 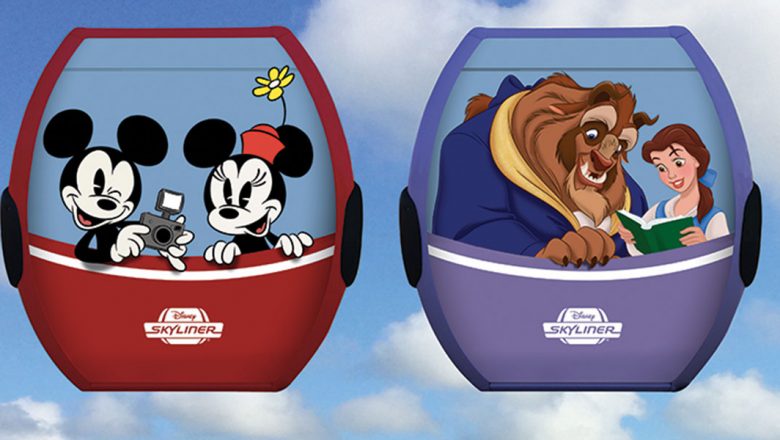 If you take a walk to the bridge connecting the France Pavilion to the UK Pavilion, you’ll spot the construction of the uprights that will serve as the support for the new Disney Skyliner transportation system. The Skyliner will make stops at Epcot, Hollywood Studios, Coronado Springs, and Art of Animation/POP Century. Since Epcot is on the list of stops, it makes sense that an additional, unannounced stop may be in store for the front of the park! If you look at the Skyliner map, though, you’ll see that the plans and route appear very solid, and since construction is well underway on the remainder of the system, we don’t think we’ll see a new stop servicing the front entrance.

A Ratatouille attraction, Guardians of the Galaxy attraction, a new restaurant, and an overhaul of Future World are all on tap for this park, and guest attendance is expected to skyrocket when it all opens. Disney are the parking lot champions, and they’ll always make sure they have more than enough parking to accommodate pocket-heavy patrons, so a parking lot would make sense! Yes, even though there wouldn’t be a physical structure going up, building permits would still be necessary to clear the land and lay pave.

There has not been announcement for a new Epcot area hotel. There has not even been the slightest indication that a new hotel would be built for Epcot, and when you take into consideration that the park has 3 Disney hotels and 2 Disney-affiliated hotels within walking distance of the International Gateway, 5 hotels is more than enough (Magic Kingdom only has 4!). 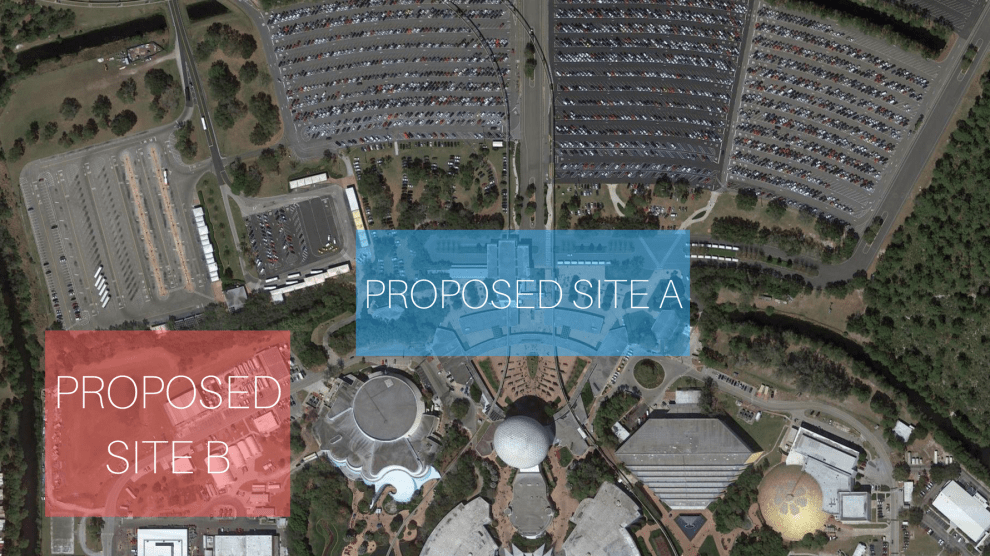 If you look at the permit maps, you’ll notice the North/West portion is circled in red, meaning that’s one of the areas the permits were filed for. Right now, it’s nothing more than a whole lot of trees, but the acreage and location would make sense for a new hotel. Do you know what else would make sense? The fact that the hotel would be right next to the monorail stop! If a hotel is built, guests would be able to walk ‘home’ after their day in Epcot, and wake up the very next morning and catch a monorail to Magic Kingdom- pretty convenient!

The list of rumors I’ve heard greatly outnumber the list of possibilities for this undeveloped land, and while the most popular of them are pretty unlikely, the fun is all in the guessing! If a new hotel is in fact being build, what will the theme be? Will it be internationally themed? Or will it take on a futuristic vibe to match with that of Future World? Or will it be something totally new? As of right now, only Mr. Mouse has those answers, so in the meantime, we’ll keep having fun creating wacky possibilities for the building project. Which leads me to this question: what do you think will be built? Let us know in the comments below!

Special thanks to Maria Salerno for writing this article: Hiya pal! I am a NYC-based writer thrilled to be bringing you all things Disney! I’m a WDW Annual Passholder, so you can find me in the parks regularly throughout the year. In addition to being a Disney Parks loving girl, I’m also a Disney toy and merchandise collector, a runDisney enthusiast, and Disney music and movie aficionado. You can follow me on Instagram: NYCtoAP and find me on YouTube: NYCtoAP. Thanks for reading, hope to see ya real soon!