Music Around the World at Epcot

What do Led Zepplin tributes, “America the Beautiful”, and traditional Mariachi music all have in common? There may be more than one correct answer. If you answered with ‘nothing’, you’d be correct! And if you answered with ‘you can hear them all at Epcot’, you’d be correct! Epcot’s World Showcase is known for its intercultural harmony and celebration of the nations that make up our world including traditional food, drink, and entertainment offerings native to each land. Music is a huge part of world culture and dates back to times before we have documented. Listen to traditional music from Japan, Mexico, Germany, the UK, and you can immediately identify each nation based purely on a melody.

A few friends of mine are planning a Disney vacation for this summer and they asked what they can do around World Showcase with drinks in hand that would also hold the attention of their children. Since they won’t be visiting during a festival, they thought I’d made an error when I told them they could see multiple live musical acts during their visit. After my shock wore off, I assured them of the great entertainment they will see during their trip, and that it’s available year-round!

A Musical Trip Around the World:

A Nod to Tradition In:

Everything from open spits cooking street corn to parades and celebrations; the streets of Mexico are where it’s at! The Mariachi Cobre in Epcot’s Mexico Pavilion follow the traditional Mariachi style and play their sets right in the pedestrian walkway, giving each of their performances a laid-back, south of the border vibe. The newly opened Choza de Margarita is the perfect spot to pick up one of their delicious frozen margaritas to sip on while listening to the band. Audience participation is encouraged, so be sure to jump up and dance with your kids!

You can’t get much more traditional than the music offering at the Japan Pavilion. You can often hear them before you see them as low, booming, thunderous sounds vibrate across World Showcase Lagoon, sometimes even reaching the UK Pavilion! If all is silent, use your eyes first. Located on an elevated patio that makes up the base of the 5-story pagoda, look for 3 large red objects as you pass by. 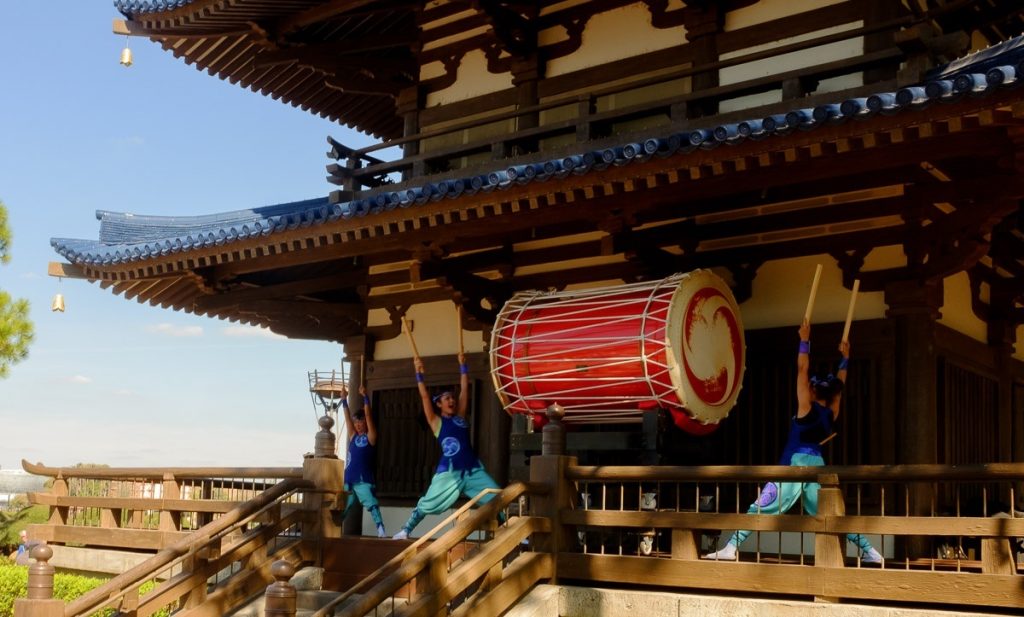 These are traditional Japanese Taiko drums. One of my favorite entertainment offerings in Epcot, the Japanese Taiko drummers perform multiple sets daily, and the performances are always energetic and enthralling. I’m always impressed by their synchronized dance moves and their ability to keep perfect time while barely breaking a sweat in the Florida heat. The rhythmic performance is kid-approved, too- my little cousin wanted an encore!

From the outside, the American Adventure is a nice-looking central point of World Showcase, but compared to some of the other pavilions, the buildings just aren’t awe-inspiring, right? Well, it’s impossible to say the same once you’ve stepped through the big white doors and into a marble floored, dome-ceilinged room gorgeously inspired by our nation’s Capitol building. The all-white room succeeds at immediately transporting you to the 1800’s, and when the Voices of Liberty make their appearance in Colonial garb, you’ll swear you are in the heart of a Massachusetts winter with our founding fathers. 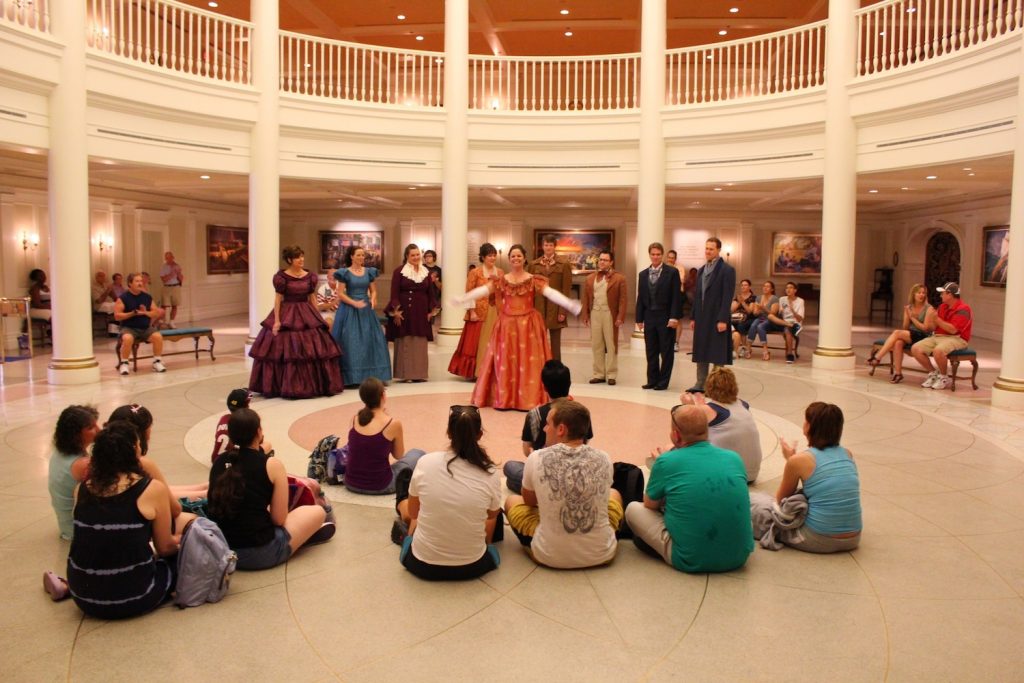 Not only does the room create fantastic ambiance, but the acoustics amplify and reverberate the Voices of Liberty’s sound, evenly distributing it around the room. So don’t worry about where you sit or stand for their set, you’ll hear their soothing crooning from wherever you choose to watch from.

Crank It Up In:

Have you ever heard of matboukha? Me either. I had to do a bit of google-ing when I first happened upon that word, and to no surprise, Disney describes it best:

“Across Morocco and the Mediterranean, “matboukha” is known as a spicy appetizer made up of cooked spices and vegetables. And much like this rich side dish, the band Matboukha Groove packs a satisfying and zesty punch.” –Waltdisneyworld.com

The Matboukha Groove is the band currently taking up residency in the Morocco Pavilion at Epcot. Many times throughout the day, you can catch one of their sets on the open-air stage in the heart of the Moroccan marketplace! Their jams are a combo of traditional and modern sounds.

My favorite of all the musical offerings around World Showcase is hands down the British Revolution. Located in the gardens behind the Twinings Tea shop, the hidden garden stage and surrounding seating is the perfect place to watch a show. I could sit back there all day- especially if someone keeps the drinks from the Rose and Crown coming. With its close proximity to Epcot’s only pub, the British Revolution has the best ‘concert’ feel of any of the acts, and their covers of Led Zepplin, Rolling Stone, and Queen songs sure don’t hurt their popularity among park guests! Again, this one is kid-approved, as I’ve watched several of their performances when I’ve had kids in my travel party, and not once has anyone stayed in their seat…get ready to rock! 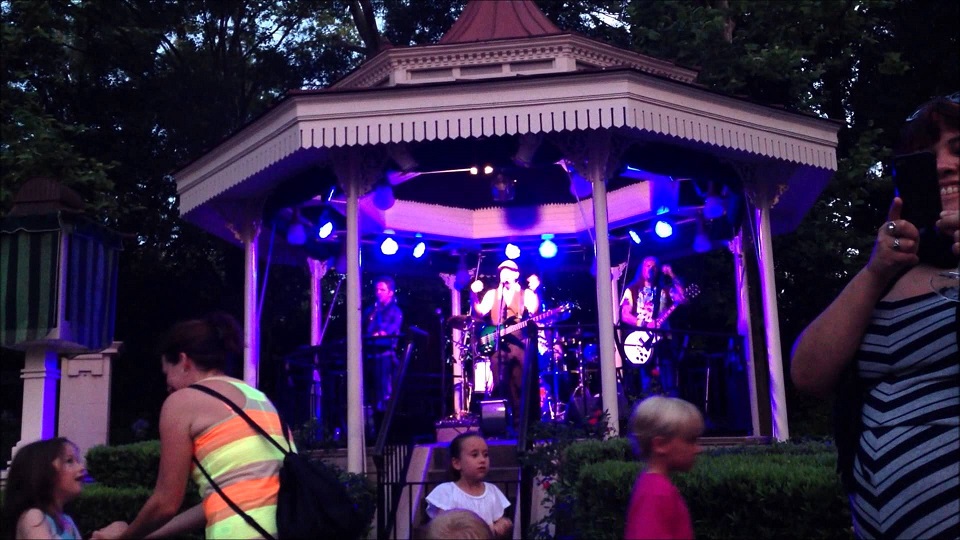 To this day, I’m still surprised by Epcot. The park has a different essence of magic than the others, but something about it brings seasoned park goers back time and time again with all they have to offer. If you’re visiting for a day or three, you will never run out of things to do. No matter the duration of your stay, don’t fall into the trap of walking past these musical acts. Not only do they provide you with a great excuse to relax and have a drink or snack, they are top-quality, diverse, educational and awesomely entertaining all at the same time! Check the daily times guide when you enter the park for a schedule of performance times. Have you rocked out with any of these musical acts? Which are you most excited to see? Comment below and let’s start a conversation!